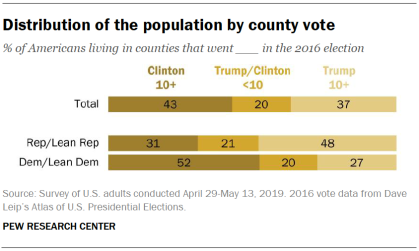 Respondents are classified into their counties using their exact address if available (99.5% of respondents). For the 0.6% of panelists without an exact address on file, panelists were matched with whatever geographic information was available (in most cases ZIP code). The 23 respondents (0.2% of the total sample) living in Alaska were excluded from these analyses as county vote totals are not available in Alaska.

To gauge comfort level with conflict, the survey included three questions. These items were recoded and combined into a scale that is referenced throughout this report. 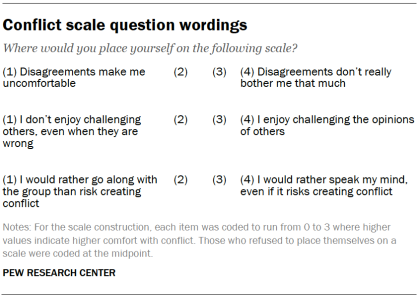 There are only modest differences in comfort with conflict across age groups, with those 65 years and older somewhat more likely to fall into the low end of the scale than those in other age groups. 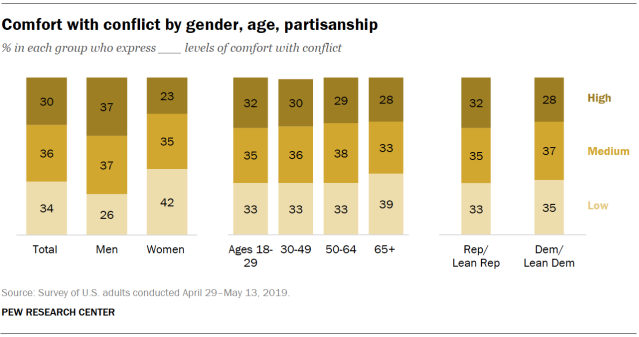 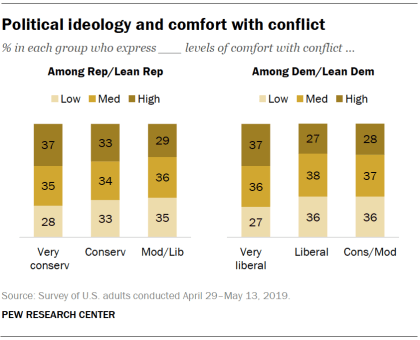 The pattern is similar among Democrats: A greater share of very liberal Democrats (37%) than liberal (27%) or conservative and moderate Democrats (28%) have high comfort with conflict.

Public Highly Critical of State of Political Discourse in the U.S. 1. The climate for discourse around the country, on campus and on social media 2. The bounds of political debate and criticism 3. Trump’s impact on the tone of political debate, important characteristics for elected officials 4. The public’s level of comfort talking politics and Trump 5. The personal side of speech and expression 6. The challenge of knowing what’s offensive Methodology
Appendix: Measures and scales
County-level 2016 vote classificationComfort with conflict scalePartisan framing survey experiments