Shortly after Election Day 2016, Democratic members of Congress became more active on Facebook, posting more frequently than Republican members for the first time since at least January 2015. And in those posts, they expressed more than twice as much political opposition – directed at both President Trump and Republicans – than Republican legislators expressed on Facebook toward Obama and Democrats during the last two years of his term. Researchers tracked congressional rhetoric on Facebook beginning in 2015. 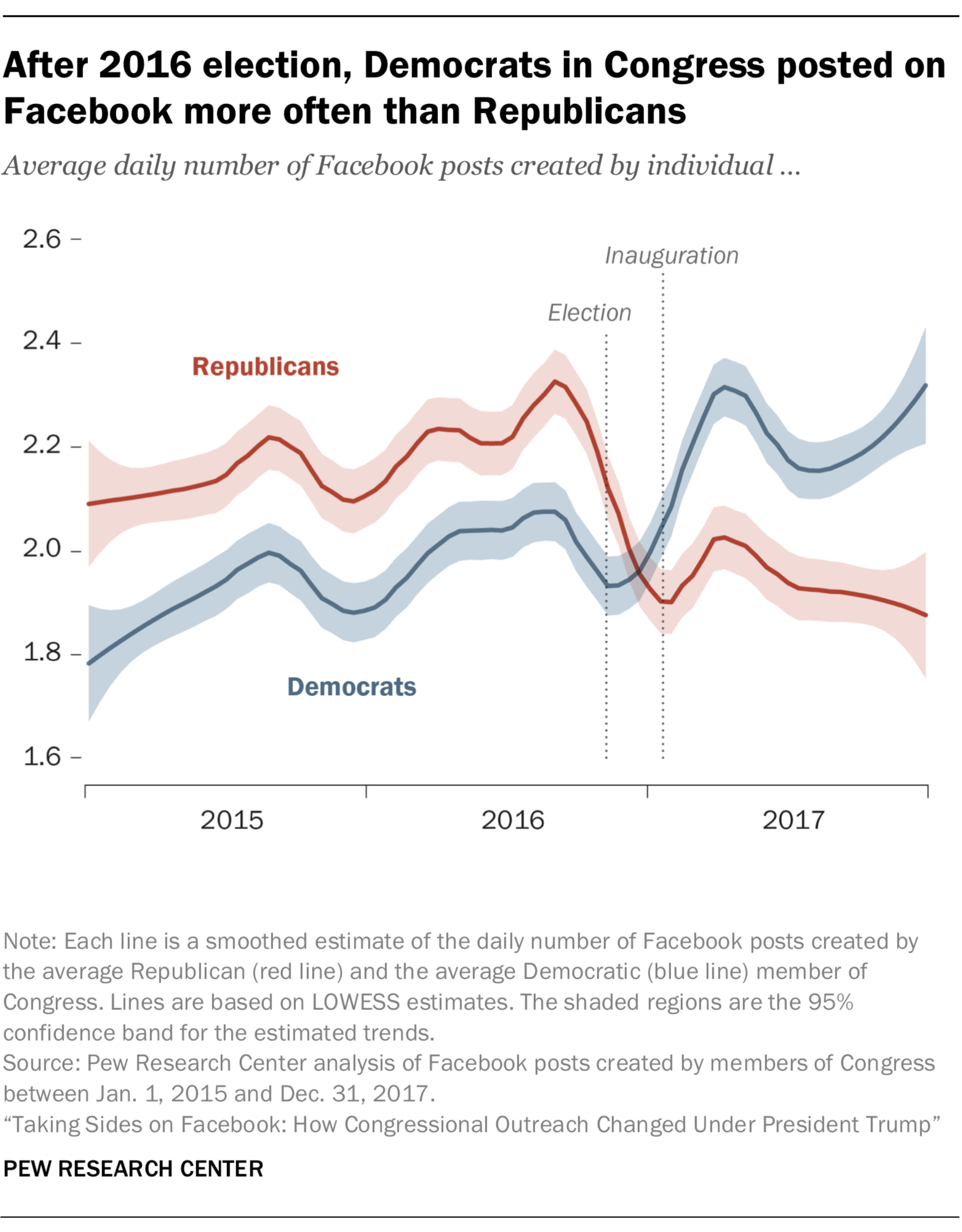 Cumulatively, these changes have had a substantial impact on the total volume of Facebook posts being produced across all members of Congress in each party. Democratic members in the 115th Congress produced over 34,000 more Facebook posts across 2017 than they averaged in each year of the 114th Congress. In contrast, Republicans produced over 25,000 fewer posts in 2017 than they averaged during the previous two years.

Overall, 19% of all Facebook posts included in the study contained statements of political support or opposition directed at one of several political figures or groups. Researchers identified the members of Congress who were most likely to express support for or opposition to the key political figures and groups analyzed here: Donald Trump, Barack Obama, Hillary Clinton, Democrats and/or liberals, and Republicans and/or conservatives, in order to provide examples of the kinds of language they used when taking sides on Facebook.

Among Republicans, Sen. Luther Strange, R-Miss., was most likely to voice support for Trump, doing so in 18% of all his posts, while Rep. Jim Jordan, R-Ohio, expressed support for Republicans in 16% of his posts, more than any other member.

One post on Strange’s Facebook page in support of Trump, created Aug. 21, 2017, said: “Tonight, President Donald J. Trump put forward a bold plan to win in Afghanistan. This is the speech our troops deserved to hear for years under President Obama and never did.” On May 4, 2017, Jordan created a post that said, “The legislation that passed the House today is better because of the intense involvement of conservatives over the past few weeks.”

When it came to Republican opposition, Sen. Johnny Isakson, R-Ga., expressed opposition to Obama in 35% of all posts from 2015 through 2017. On April 4, 2016, he wrote: “Yet again President Obama has undermined the trust of our military leaders and jeopardized the well-being of our nation.” Rep. Jeff Duncan, R-S.C., opposed Democrats most often, in 9% of all posts, while Rep. Trey Gowdy, R-S.C., expressed the most opposition to Hillary Clinton, doing so in 8% of his posts.

On Sept. 25, 2017, Duncan wrote: “When will Democrats admit their great social engineering experiment is a failure and that people are suffering because of it?” Almost all of Gowdy’s criticism focused on Clinton’s tenure as secretary of state and controversy over her email use. On July 7, 2016, he wrote: “if you are a private citizen in the Army and you email yourself classified information, you will be kicked out. But if you are Hillary Clinton and you seek a promotion to commander-in-chief, you will not be.”

On the Democratic side, former Sen. Harry Reid, D-Nev., was both most likely to support Obama (18% of his posts) and most likely to oppose Republicans (44%).5 On Jan. 21, 2015, he wrote a post that did both: “President Obama laid out a clear vision for strengthening America’s middle class that draws a clear contrast with the Republican Congress’ partisan political agenda of special interest giveaways and tax breaks for the wealthiest Americans.” Minority Leader Nancy Pelosi, D-Calif., was most likely to support fellow Democrats and did so in 24% of her posts. One such post, from April 25, 2016, stated that “Democrats have introduced an emergency supplemental bill that will provide the swift and decisive action needed to help protect American communities from the Zika virus this summer.”

Former Sen. Barbara Boxer, D-Calif., had the largest share of posts (12%) that supported Hillary Clinton.6 For example, a post created shortly after Clinton’s nomination on July 29, 2016, stated: “I’ve known Hillary for more than 20 years, and I couldn’t be more proud of her.”

When it came to conflict with Trump, Rep. Jerrold Nadler, D-N.Y., was the most likely to express opposition and did so in 40% of his Facebook posts. On Aug. 15, 2017, in the wake of a violent white supremacist rally in Charlottesville, Virginia, Nadler wrote, “When the man occupying the White House calls racists and neo-Nazis ‘very fine people,’ just saying ‘hate is bad,’ doesn’t remotely cut it.” 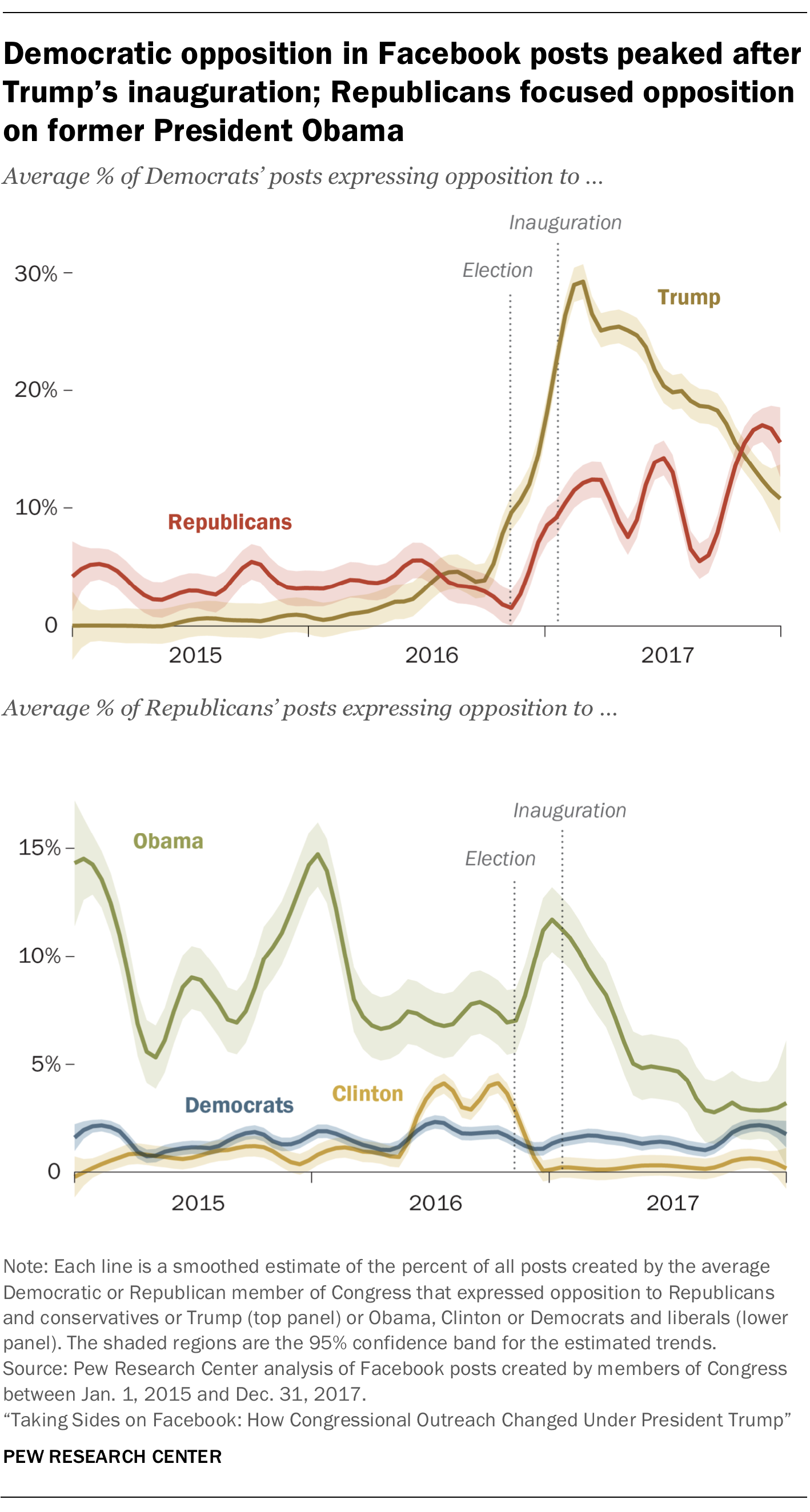 These patterns parallel an increased appetite for political conflict among legislators’ Democratic constituents. From 2017 to 2018, the percentage of Democrats in the U.S. public who said they like elected officials who make compromises with those they disagree with dropped from 69% to 46%.

Across the study period, Republicans focused on President Obama in 82% of oppositional posts on average (8% of all posts by the average lawmaker). A much smaller share of Republicans’ posts expressed opposition toward Democrats or Hillary Clinton (2% and 1% of all posts by the average lawmaker, respectively). This focus on Obama persisted after the election. Across 2017, statements opposing Obama and Obama-era policies like the Affordable Care Act were more common than those opposing Democrats. At the same time, throughout 2017, fewer than 1% of the average Republican’s posts expressed opposition to Clinton, despite some anecdotal reports to the contrary.

More liberal or conservative legislators – based on the DW-NOMINATE estimate of ideology – were about twice as likely to express either support or opposition toward other political figures and groups as compared with more moderate members.

Moderate members – defined as those that fell in the middle 20% of the roll-call-based ideology estimate – publicly opposed others in about 7% of posts, compared with a rate of about 16% for the most conservative or liberal members, defined as those in the most liberal tenth or most conservative tenth of the ideology measure. Moderates expressed support for the president or their party in roughly 5% of their Facebook posts, while the most liberal or conservative members did so in 10% of all their Facebook outreach. 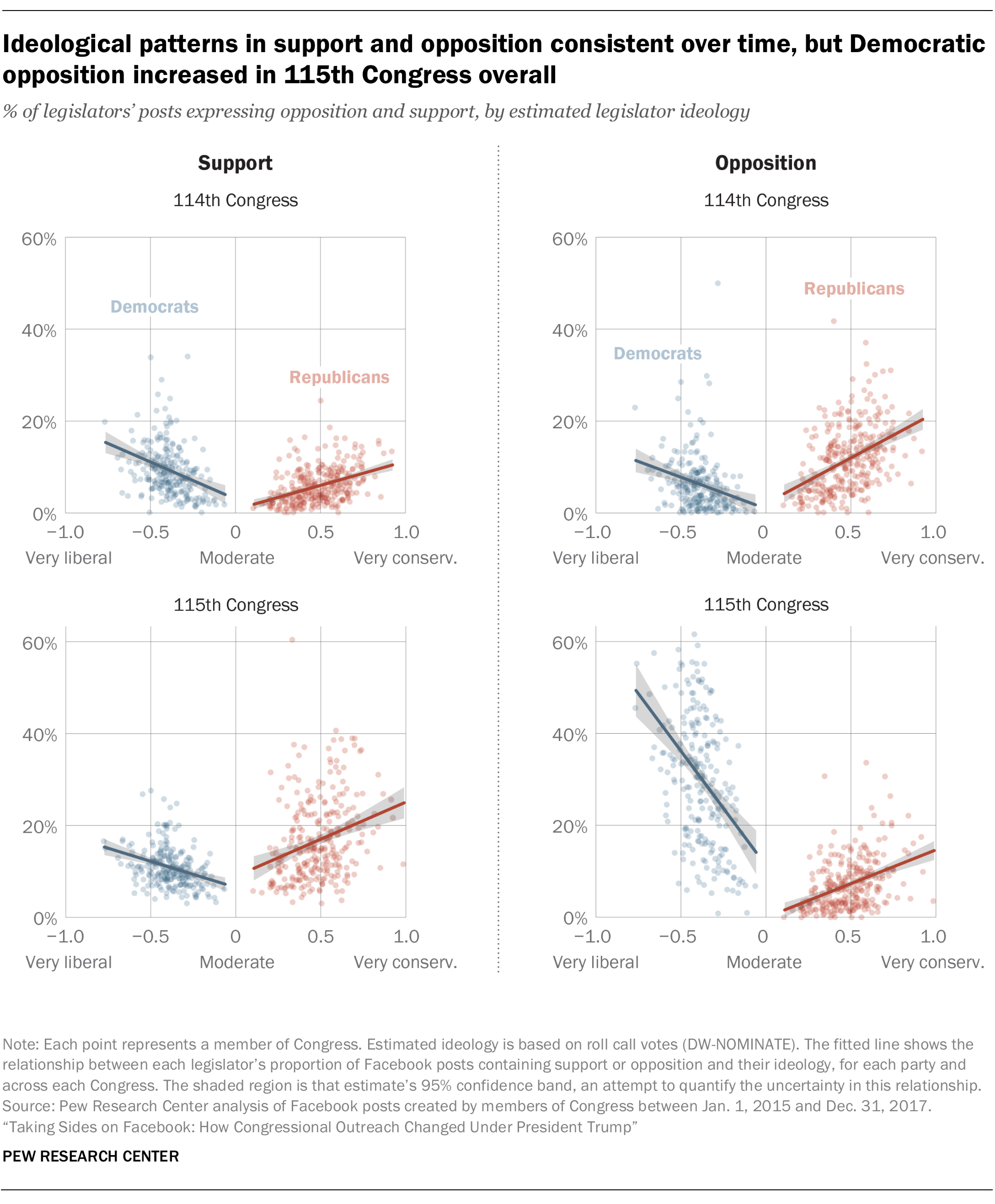 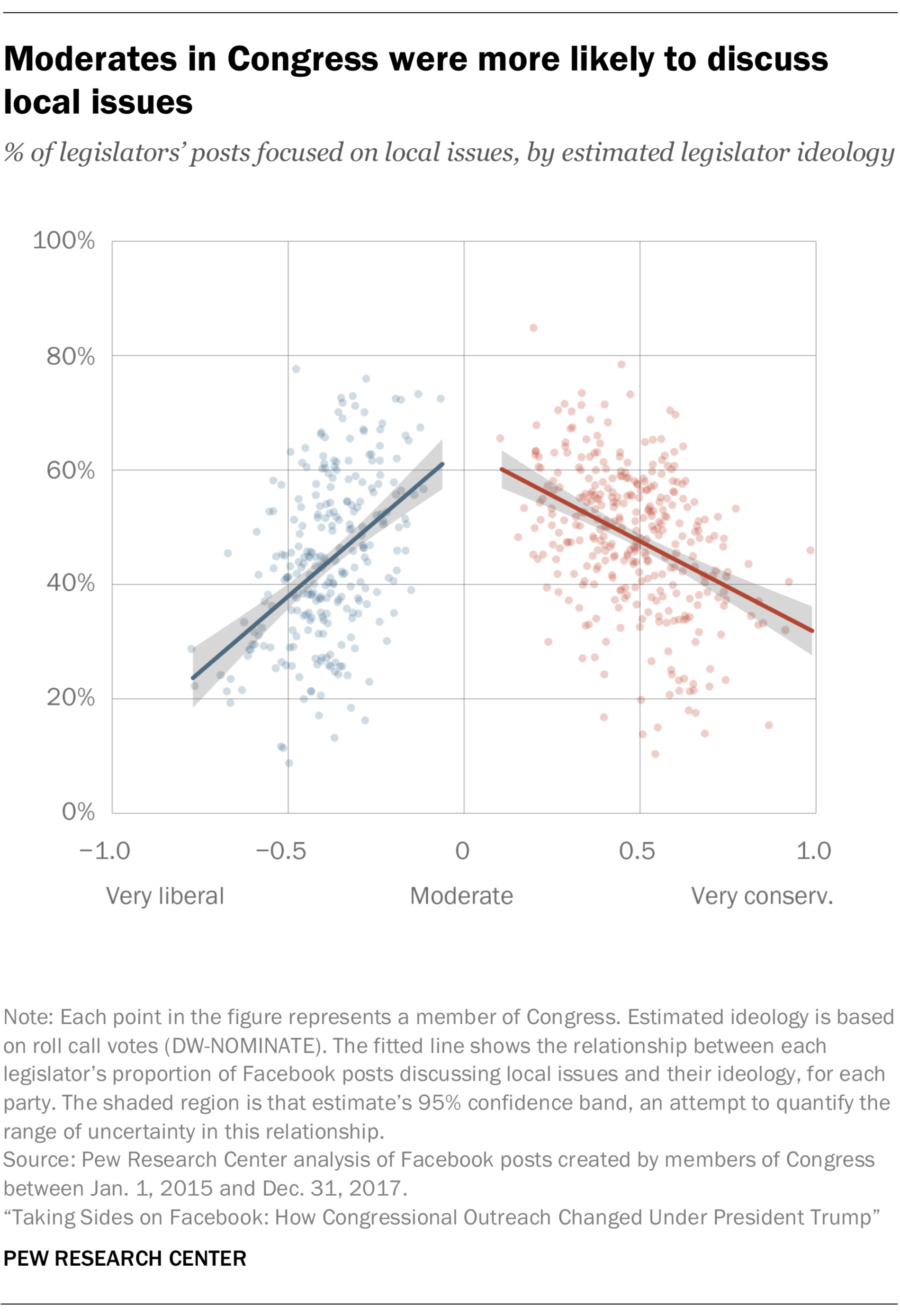 During the 115th Congress, starting in January 2017 and including the inauguration of President Trump, the link between ideology and political opposition became even more pronounced among Democrats. For that Congress, the most liberal Democrats expressed opposition in 35% of posts on average, compared with 10% for moderates.

In contrast, while the most liberal and conservative members of Congress focused their rhetoric on expressions of political support and opposition, moderates disproportionately talked about local issues in their Facebook outreach. These posts, which draw attention to individuals, groups, and organizations in the state or district the member represents, made up more than half of all posts from the most moderate members of Congress, compared with about one-third of posts for those on each end of the ideological spectrum.

In general, members were more likely to cover these local issues than engage in other forms of outreach described here, including opposition to political opponents. Over the course of the full three-year study period, nearly half of congressional outreach on Facebook focused on local issues (45% of posts), compared with the 13% of all posts that expressed oppositional views. The average Republican focused on local topics in 48% of Facebook posts, compared with a rate of 44% for the average Democrat. Meanwhile, only 16% of posts from the average Democrat and 10% from the average Republican expressed opposition to the other side. Across both parties, the average legislator expressed support for others in their own party in 8% of posts.

During the 2016 campaign, members of both parties focused on Clinton

During the run-up to the 2016 election, Trump and Clinton drew modest attention from members of Congress on Facebook, and then-candidate Trump received less support from members of his party than Clinton did from hers. Between each party’s convention and Election Day, Democrats in Congress posted in support of Clinton substantially more often (a total of 1,614 posts) than Republicans posted in support of Trump (a total of 690 posts). However, Republicans opposed Clinton in 2,041 posts, far more than Democrats expressed opposition to Trump (1,383 posts).

Legislators also weighed in on the two candidates using both their unofficial and official accounts. In total, 154 (11%) of the 1,383 pre-election posts in which Democrats opposed then-candidate Trump came from legislators’ official accounts. Republicans leaned even more heavily on their official accounts when it came to candidate-focused election outreach, using those accounts to express opposition to Clinton in about one out of every four posts (26%) that did so across both account types (522 of 2,041 total posts). Congressional rules prohibit legislators from posting campaign-related content on their official accounts, but these restrictions may not apply to posts that mention political candidates outside the context of elections. Clinton was often discussed in the context of her role as secretary of state under President Obama, and Republican opposition to Clinton frequently focused on issues such as the attack on the U.S. Embassy in Benghazi, Libya, and the FBI investigation into her use of a personal email account as secretary of state. In contrast, posts by Democrats that opposed Trump focused on his role as a presidential candidate and public figure.

Next: 2. How the Facebook audience engaged with congressional posts
← Prev Page
Page1You are reading page2Page3Page4Page5
Next Page →