Majorities in all generations say the country needs to continue making changes to give blacks equal rights with whites, reflecting a public shift in these views in recent years. But Millennials are far more likely to hold this view than Boomers and Silents. The current generational gap in opinion is a relatively new one – as recently as 2015 there was not a substantial difference in these views by generation.

The divide is driven mostly by an uptick in the share of Millennials who say the U.S. needs to continue making changes to give blacks equal rights with whites.

There is a similar pattern on views of racial discrimination. In 2012, similar shares of adults in each generation (about two-in-ten) said that discrimination was “the main reason why many black people can’t get ahead these days” rather than that “blacks who can’t get ahead in this country are mostly responsible for their own condition.” 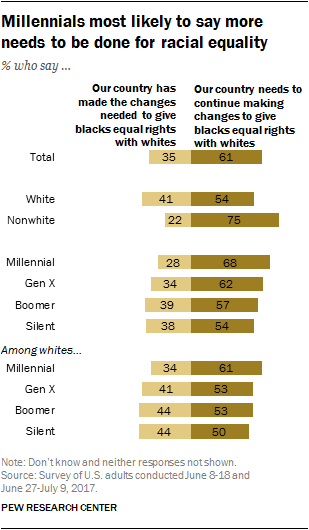 Since 2012, the share of Millennials who cite discrimination as the main reason blacks can’t get ahead these days has more than doubled (24% in 2012 to 52% in 2017), and a 24-point gap now separates the oldest and youngest generations.

The size of the generational divide on views about race is not simply attributable to the larger share of nonwhites in younger generations. White Millennials are 11-percentage points more likely than white Silents to say the country needs to continue making changes to give blacks equal rights with whites, similar to the 14- point generational gap in these views among all adults.

The share of adults in all generations saying immigrants strengthen our country because of their hard work and talents, rather than burden the country by taking jobs and health care, has grown in recent years as overall public sentiment has shifted. 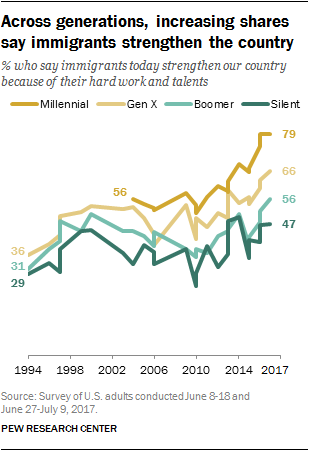 But there has long been a generational divide in these views. Millennials, in particular, stand out for their positive views of immigrants: 79% say they strengthen rather than burden the country. And while about two-thirds (66%) of Gen Xers now say this, that compares with a narrower majority of Boomers (56%) and about half (47%) of Silents.

These wide divides are seen not just among the generations overall, but also among whites across generations. Fully 76% of white Millennials say immigrants do more to strengthen than burden the country, compared with 61% of white Gen Xers, 54% of white Boomers and 45% of white Silents. 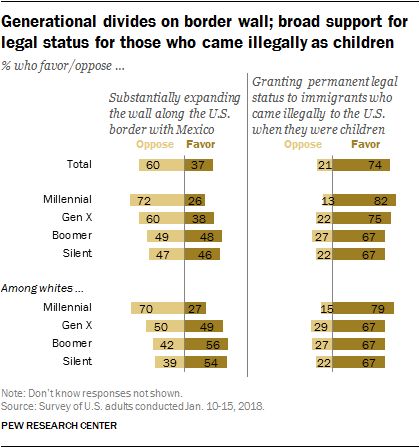 These generational divides are also evident on public views of issues at the heart of the current immigration policy debate: opinions about plans to substantially expand the wall along the U.S. border with Mexico and views about granting permanent legal status to immigrants brought to the U.S. illegally when they were children.

Majority support for same-sex marriage, except among Silents

In the past decade, across generations, the public has grown more accepting of same-sex marriage. Two years after the Supreme Court decision that required states to recognize same-sex marriage nationwide, the share saying they favor allowing gays and lesbians to marry legally stands at its highest on record. By roughly two-to-one, a majority are in favor (62%), while about a third (32%) are opposed.

While there are gaps in these attitudes across generational lines, they have remained consistent over time. Millennials continue to be the adult generation most likely to say they favor allowing gays and lesbians to marry legally: Fully 73% say this. By about two-to-one, Generation Xers also say they favor more than oppose (65% vs. 29%).

For the first time, a majority of Baby Boomers also express support for same-sex marriage: 56% say they favor allowing gays and lesbians to marry legally.

While Silents have grown in their acceptance of same-sex marriage over time, they are divided: 41% say they favor, 49% are opposed.

Majorities across generations say there is ‘solid evidence’ of global warming

Overall, about three-quarters of the public currently thinks there is solid evidence that the average temperature on Earth has been getting warmer, including about half (53%) who say it is a result of human activity when asked a follow-up question about the causes.

Just about a quarter of the public overall (23%) say there is not solid evidence that the Earth’s temperature is warming.

Across generational lines, majorities say there is solid evidence that the Earth is warming. Still, younger generations are more likely to say this: 81% of Millennials and 75% of Gen Xers say the Earth’s temperature is getting warmer compared with 69% of Baby Boomers and 63% of Silents. And Millennials are the only generation in which a clear majority (65%) says both that there is solid evidence of global warming and attribute this primarily to human activity.

And while about nine-in-ten Democrats and Democratic leaners across generational lines say there is solid evidence of the Earth warming, Millennials are somewhat more likely than those in older generations to attribute the cause of warming to human activity: Fully 87% say this, compared with no more than about three-quarters of Gen Xers (73%), Boomers (74%) or Silents (72%).

Views of gun policy had differed little across generations 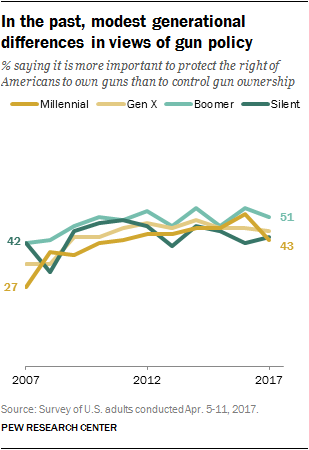 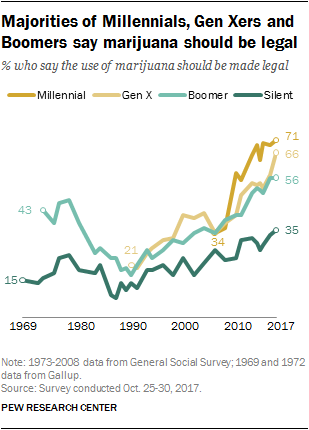 Among the public, support for marijuana legalization stands among its highest levels on record. Currently, 61% of Americans say the use of marijuana should be made legal, while 37% say it should not. Since 2000, the share supporting legal marijuana use has nearly doubled (61% now vs. 31% then).

Across generational lines, support for legalized marijuana has grown as well. Wide majorities of Millennials (71%) and Generation Xers (66%) say the use of marijuana should be made legal, as does a narrower majority of Baby Boomers (56%).

Members of the Silent Generation stand out for their low level of support of legal marijuana use: Just about a third (35%) say marijuana use should be legal, compared with a 58% majority who say it should not.