Over the last several decades a clear generational divide has been evident in views of government, with those in younger generations more likely than those in older generations to express a preference for a bigger government with more services.

There also are generational differences in views of the government safety net; Millennials and Gen Xers are more likely than Boomers or Silents to say the government should do more for the needy, even if it means going deeper into debt. And Millennials are more likely than older generations to say it is the federal government’s responsibility to make sure all Americans have health care coverage.

However, trust in government is low across younger and older age cohorts. And majorities across generations say they are frustrated – rather than angry or content – with the federal government.

Roughly half of Boomers, Gen Xers and Millennials say that economic inequality in the United States is a “very big” problem. Silents are less likely to hold this view. 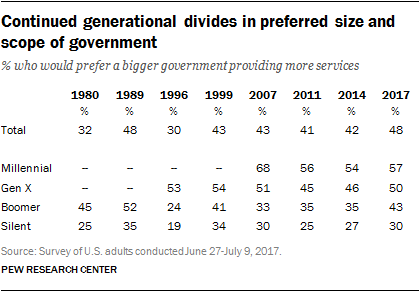 For nearly three decades, majorities of Boomers and Silents have expressed a preference for a smaller government providing fewer services.

Views of government role on health care, aid to needy 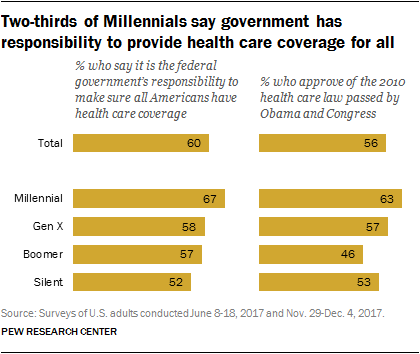 Last July, 60% of the public overall said the government was responsible for providing health care coverage for all Americans – the highest share expressing this view in nearly a decade.

Two-thirds of Millennials say the government has the responsibility to ensure health coverage for all, more than any other generational cohort.

In a separate survey in December, majorities of both Millennials (63%) and Gen Xers (57%) approved of the 2010 health care law. About half of Silents also approved of the Affordable Care Act, while Boomers were roughly divided: 46% of Boomers approved, while 49% disapproved.

Those in the Silent Generation are more divided over the hardships of the poor. While 43% say they have hard lives, about as many (45%) say they have it easy because they get government benefits without doing anything in return.

Trust in government is low across age cohorts 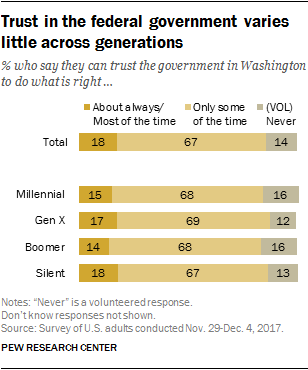 These attitudes vary little across generational groups. Just 15% of Millennials – and comparable shares in older age cohorts – said they trust the government just about always or most of the time.

Historically, there have been modest generational differences in trust: Younger adults tend to be slightly more likely than older people to express trust in the government. At a young age, in the early 1990s, members of Generation X were somewhat more likely than Baby Boomers and members of the Silent Generation to say they could trust the government at least most of the time. A similar pattern can be seen among Boomers, compared with Silents, in the 1970s and 1980s when they were young.

See the accompanying interactive for long-term trends on public trust in government, including among generations and partisan groups.

There are only modest differences across generational lines in views of the fairness of the U.S. economy and whether economic inequality is a problem. 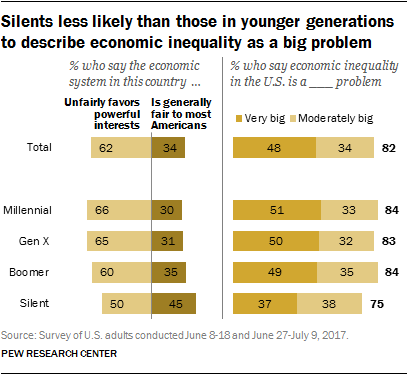 Overall, 62% of the public says the economic system in this country unfairly favors powerful interests; about half as many (34%) say the system is generally fair to most Americans.

Nearly two-thirds of Millennials (66%) and Gen Xers (65%) say the system unfairly favors powerful interests; six-in-ten Boomers say the same. By comparison, members of the Silent Generation are more divided on the fairness of the economic system: While 50% say it unfairly favors the powerful, 45% say it is generally fair to most.