Drilling down into the issues that arise most often when the nation’s legislators criticize the other party helps to reveal the arguments at the heart of a contentious Congress. What follows is a more systematic examination of how negative partisan speech fluctuates with the ebb and flow of political developments, as well as the specific words and phrases that best distinguish indignant disagreement from the many other ways legislators communicate with the public.

Partisan disagreements do not merely occur on a constant basis, or at random. Instead, they come in bursts that follow partisan policy fights, often related to political developments. 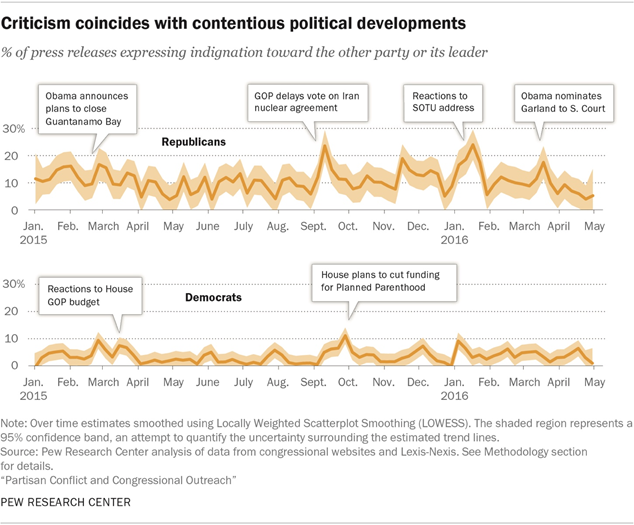 Democrats criticized Republicans in press releases after events such as the GOP’s March 2015 budget proposal and September 2015 plans to defund Planned Parenthood. Republican indignant opposition to the president and his party surfaced after Obama announced initiatives to sign a nuclear nonproliferation treaty with Iran in August and September 2015; prepared to close the Guantanamo Bay detention center in February 2015; and nominated Merrick Garland to the Supreme Court in March 2016.

Researchers measured how unusual or distinctive particular words were in a specific document category (such as disagreement, indignant disagreement, or bipartisanship). The measure presented in this section is called normalized pointwise mutual information. It captures how often a word actually appeared in a particular type of document – like those that contained indignant disagreement – compared with how often that word might have appeared by chance alone. The plots below rank the 25 most distinctive words in various categories in the y-axis.

Researchers also compared how often the same words appeared in each category. Specifically, this captures the difference between how often a given word appeared in documents of a particular type and how often it occurred in other types of documents.

Using the same example, the x-axis in the plot below shows how much more frequently the word “Republican” occurred in documents containing indignant disagreement compared with those that did not. Overall, 95% of indignant statements from Democrats contained the word “Republican,” while only 7% of other statements issued by Democrats did. Thus the difference in the percent of documents from each category is 88. 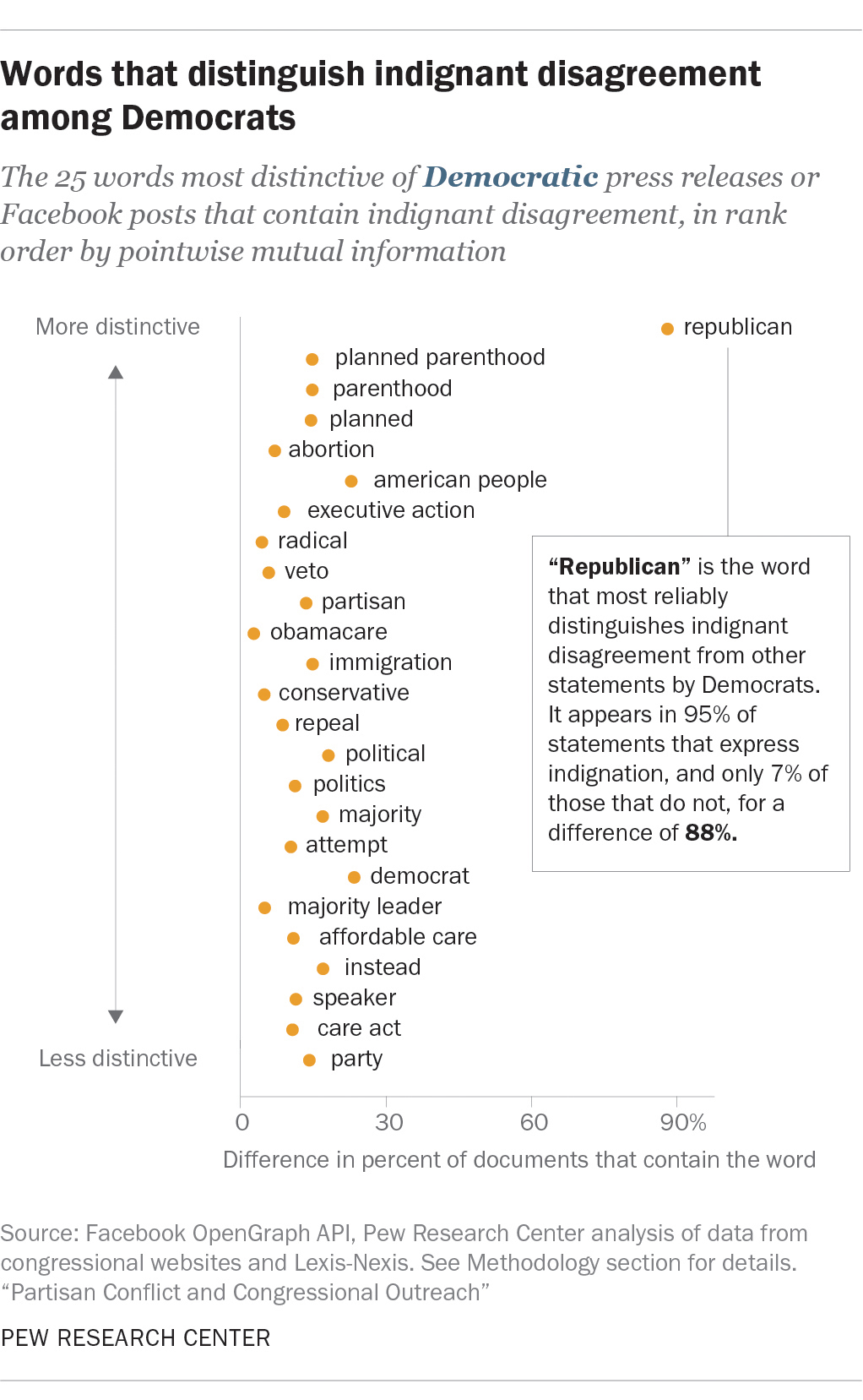 Words and phrases that are plainly associated with immigration, the Affordable Care Act (ACA), efforts to defund Planned Parenthood and replacing the late Supreme Court Justice Antonin Scalia all distinguished Democratic attacks on Republicans from other content. One example of this kind of attack, which came from Sen. Barbara Boxer (D-Calif.) in the wake of a Republican-supported bill limiting access to abortion, follows:

“The women of America won’t forget these outrageous attacks on their health and their lives. We won’t let Republicans turn back the clock. We will fight back.”

Republican criticism of Democrats used words and phrases related to the president, the ACA, a nuclear deal with Iran, immigration, executive power and veto actions. Notably, the word “Democrat” did not appear; since disagreement with congressional Democrats was so much less frequent than disagreement with Obama, the word does not distinguish Republican indignant disagreement.18 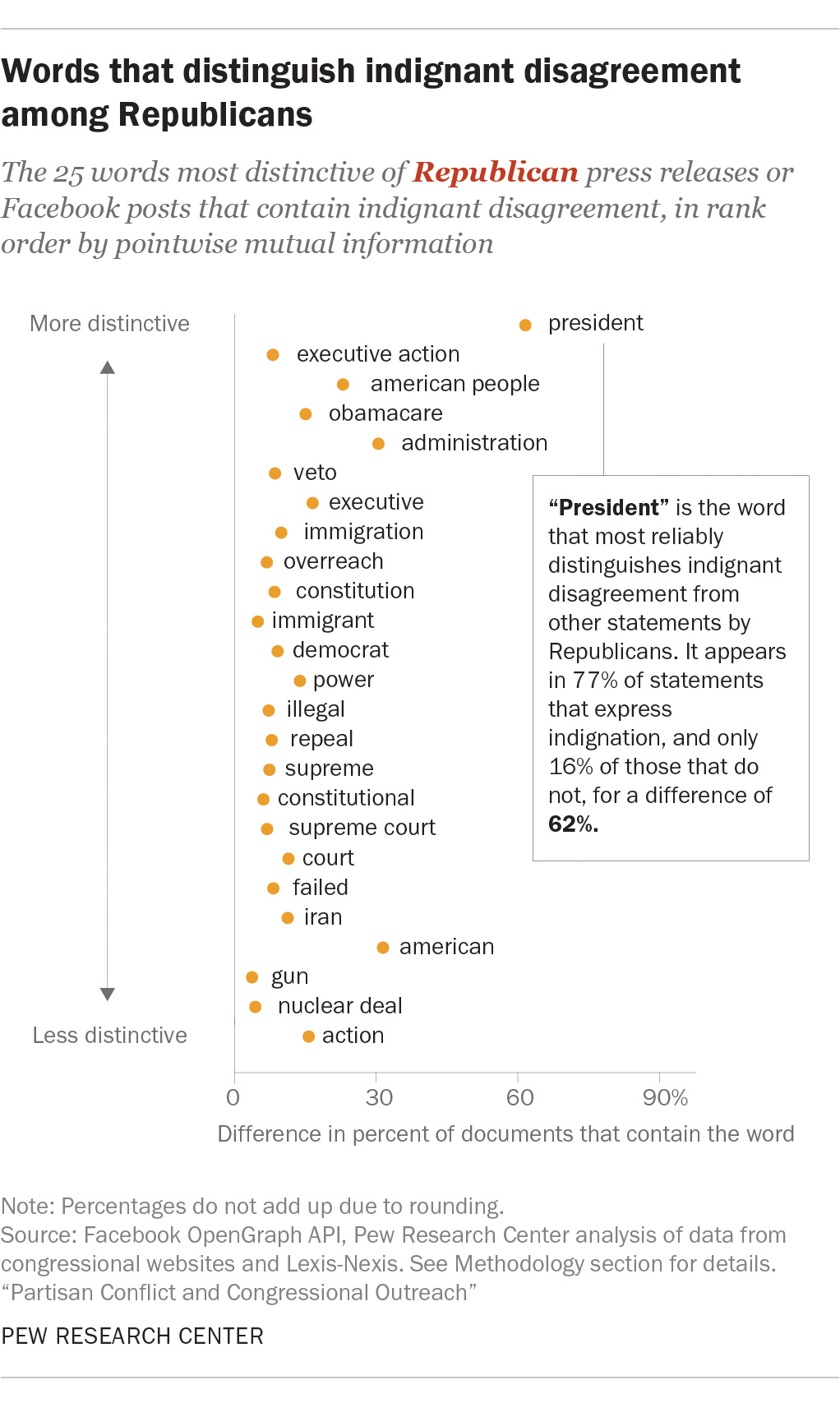 When elected officials highlighted bipartisanship, they emphasized the importance of working across party lines, irrespective of ideological differences. Members often released this messaging following their efforts to progress toward passage of bipartisan legislation.

Members most often explicitly used the term “bipartisan” in such communications. However, occasionally they omitted that term, 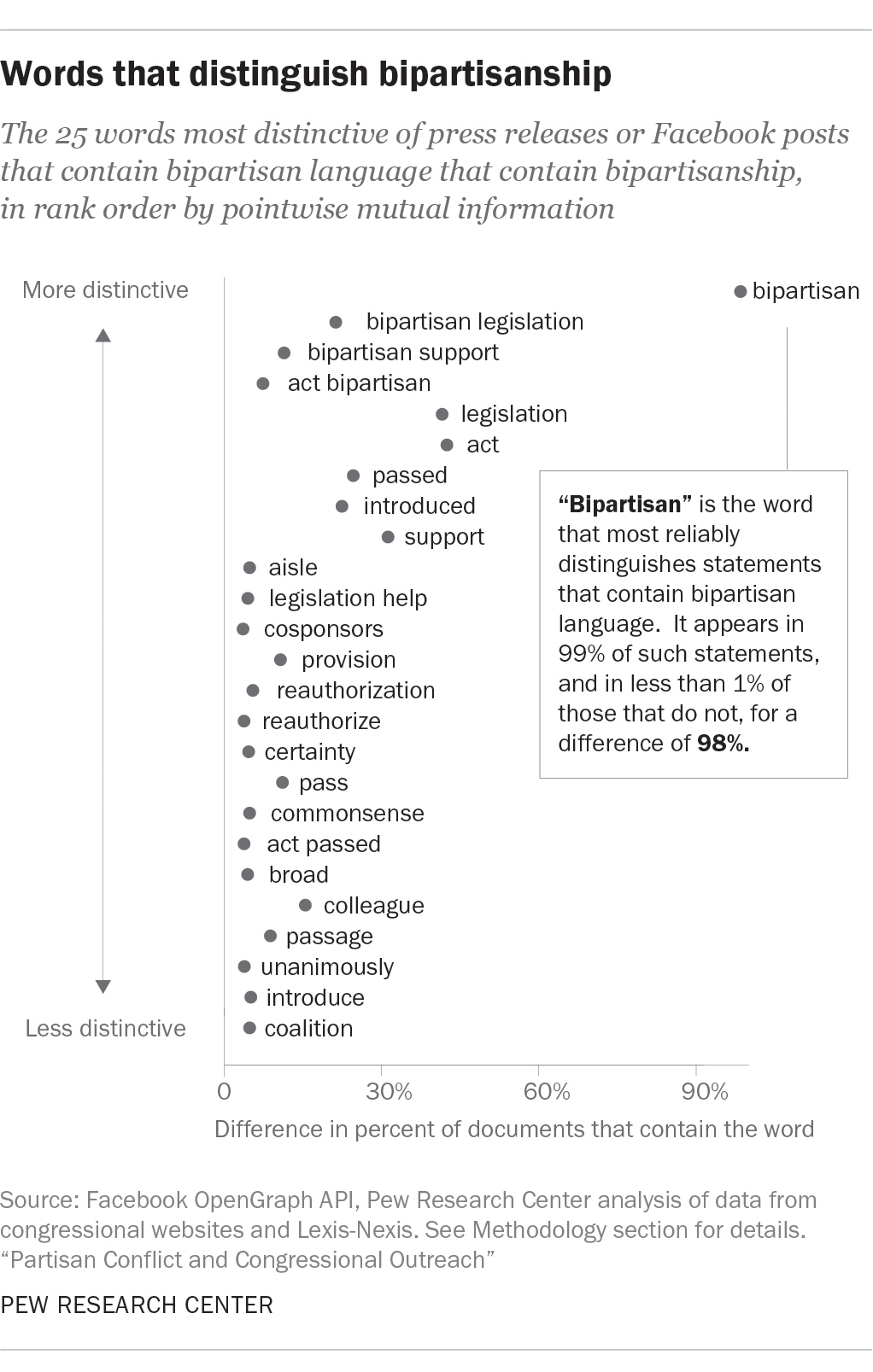 so only examining documents containing the term “bipartisan” would miss important cases. For example, Rep. Joseph Crowley (D-N.Y.) issued a press release discussing collaboration across the aisle: “Crowley, Serrano, and Curbelo, along with Reps. Ben Ray Lujan (D-N.M.) and Will Hurd (R-Texas), successfully led an amendment to the America COMPETES Reauthorization Act to require the National Science Foundation (NSF) to establish a grant program to support undergraduate STEM education at HSI’s.” And then-House Speaker John Boehner (R-Ohio) advocated for a bill by stating: “Now the SPACE Act boldly goes to the Senate, and we hope, the president’s desk, where it can begin a long life of helping our kids and grandkids prosper. Republicans and Democrats should come together to make it so.” 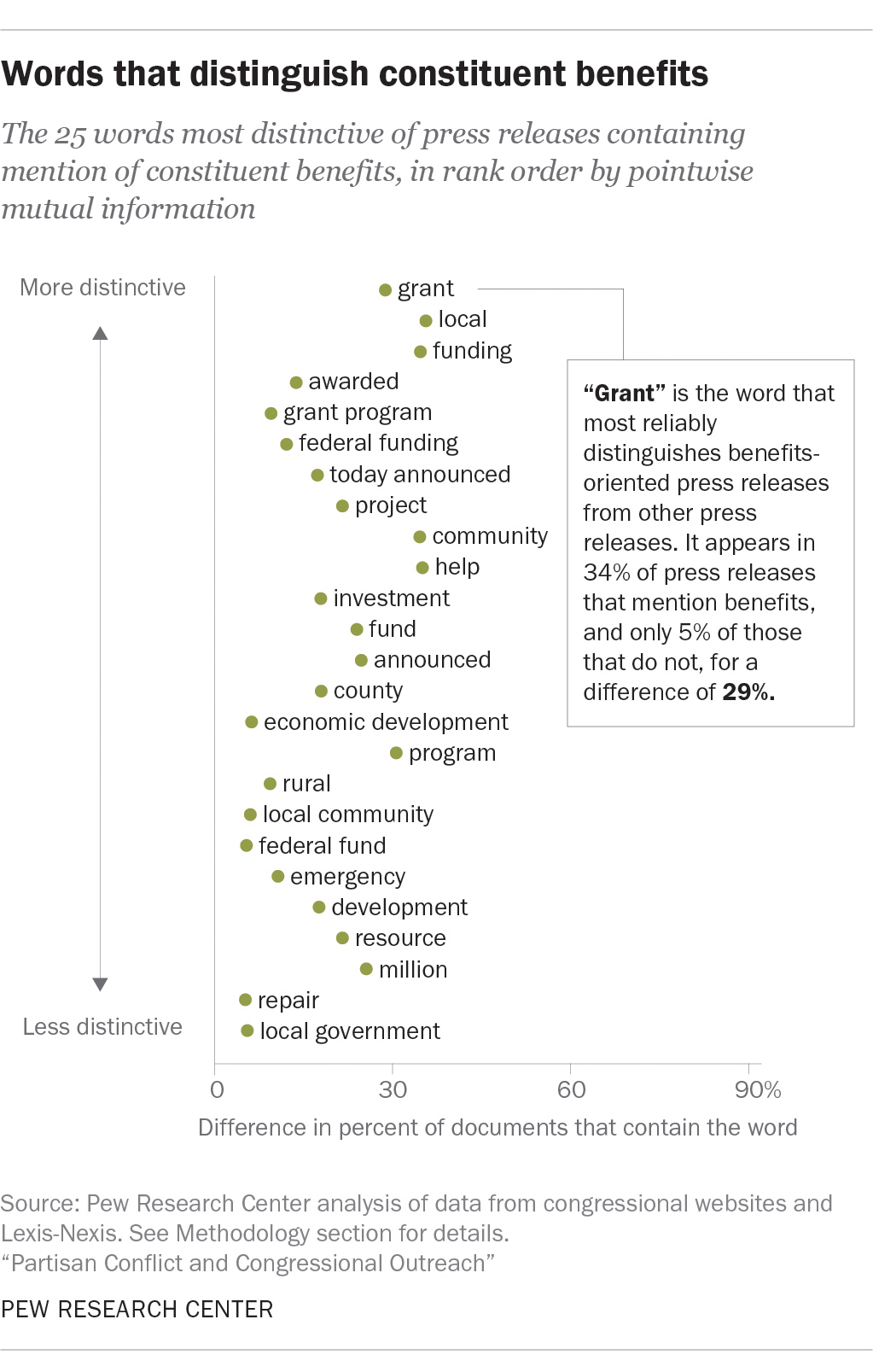 When lawmakers discussed constituent benefits in press releases, their prose was marked by invocations of resources from the federal government, such as grant funding, local investments and other projects, especially related to economic development and emergency services. An example of one such announcement comes from the office of Rep. Mark Desaulnier (D-Calif.), which announced a federal job training program in a press release: “These federal funds will help train 51 students and place at least 45 graduates in environmental jobs including solar energy installation, hazardous waste removal, and construction.” 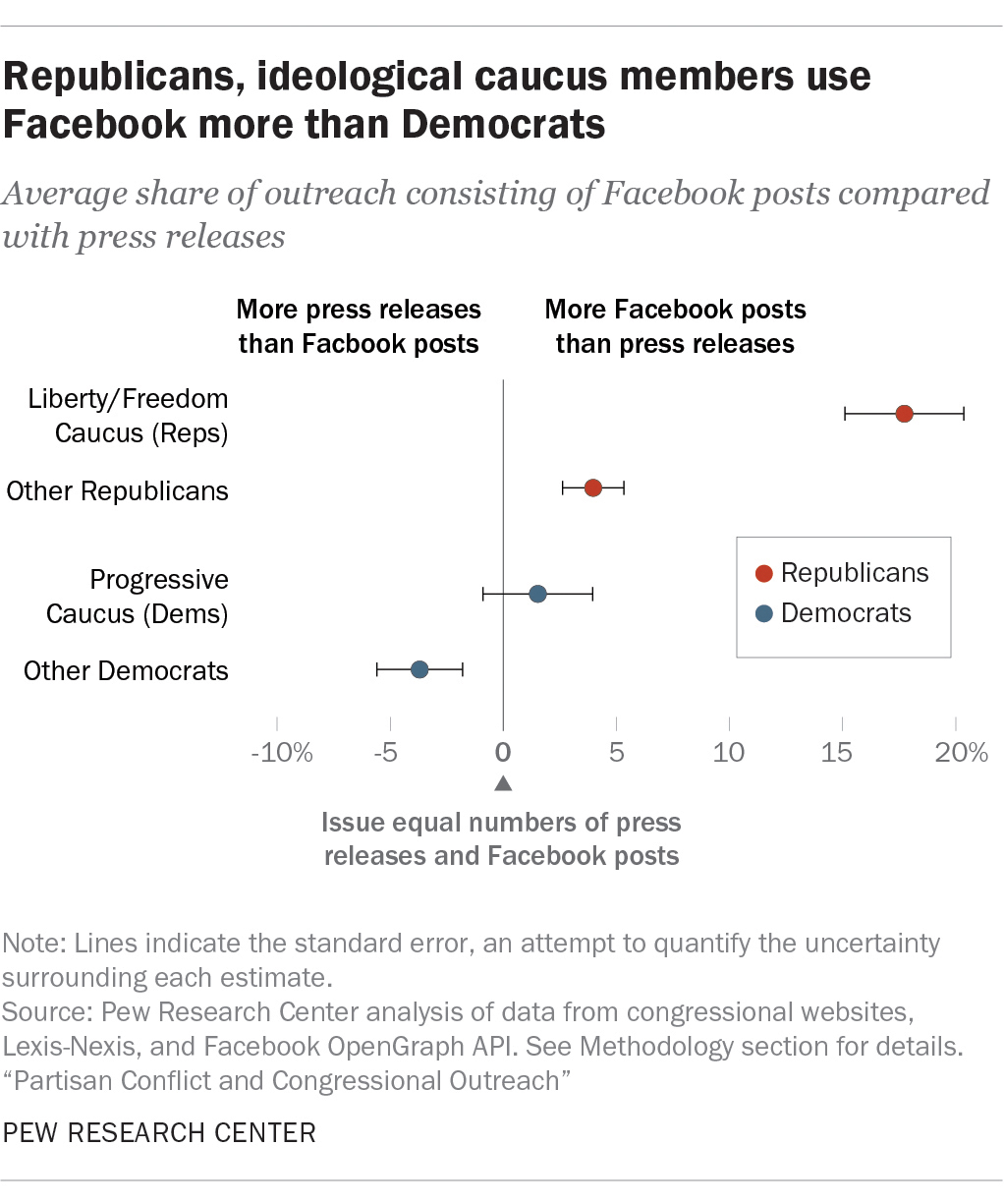 Partisan Conflict and Congressional Outreach 1. Who is going negative? Leadership and very liberal or conservative members most critical of other side 2. How the public reacted on Facebook
3. Partisan language in congressional outreach
What disagreement looks likeCongressional appeals to bipartisanshipConstituent benefits: Grants and earmarksRepublicans, Liberty and Freedom caucuses more reliant on social media
Acknowledgments Methodology Appendix A Appendix B: Terminology