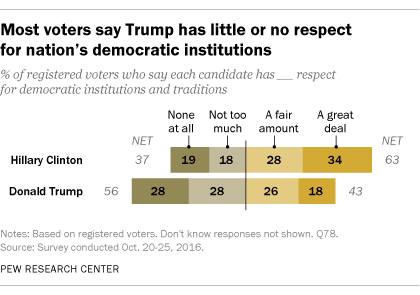 As the presidential campaign enters its final days, opinions about American democracy and the candidates’ respect for democratic institutions – as well their respect for women, minorities and other groups in society– have emerged as political flashpoints.

Far more voters think Hillary Clinton respects women, minorities and the nation’s democracy. And nearly twice as many describe Clinton as “well-qualified” than say that about Trump (62% vs. 32%). Yet concerns over Clinton’s honesty persist, and just 35% say that, if elected, she would make a good or great president; even fewer (27%) think Trump would make a good or great president. These views have changed little over the course of the campaign.

The latest survey by Pew Research Center, conducted Oct. 20-25 among 2,583 adults, including 2,120 registered voters, finds broad agreement about the importance of some aspects of democracy, such as fair and open elections. But there are sharp divisions over whether other aspects are very important to maintaining a strong democracy – notably, that losers of elections recognize the legitimacy of the winners and that news organizations are free to criticize politicians. 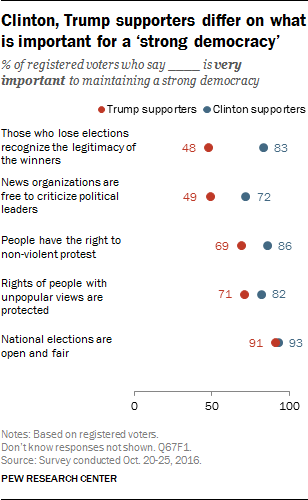 However, Clinton supporters (86%) are more likely than Trump supporters (69%) to say it is very important that people have a right to non-violent protest.

Trump voters also are far less likely to say that the freedom of the press to criticize political leaders is essential to maintaining a strong democracy. Only about half of Trump supporters (49%) view this as very important, compared with 72% of Clinton supporters.

The survey finds considerable evidence of the bitterness unleashed by the presidential campaign. Dating back to 1988, no candidate, Democrat or Republican, has been viewed as more critical of their opponent than is Trump today (the question was not asked in 1992).

Currently, 62% of voters say Trump has been too personally critical of Clinton, which is about 10 percentage points higher than the previous peak (53% said that about Bob Dole in 1996, 52% for John Kerry in 2004). Just 36% say he has not been too critical of Clinton.

By comparison, 44% say Clinton has been too personally critical of her opponent, which is higher than the share saying that about Barack Obama during either of his campaigns.

An increasing share of voters believes that insulting political opponents is “sometimes fair game.” Most voters (54%) say it is “never fair game” for politicians to insult their opponents, but 43% say insults are sometimes acceptable, up from 30% in March during the presidential primaries.

Among voters in both parties, more view political insults as acceptable than did so in the spring. Today, 48% of Republican and Republican-leaning registered voters say insulting opponents is sometimes fair game, up from 38% in March. By comparison, 37% of Democrats say political insults are sometimes justifiable, a 12-percentage-point increase since then. 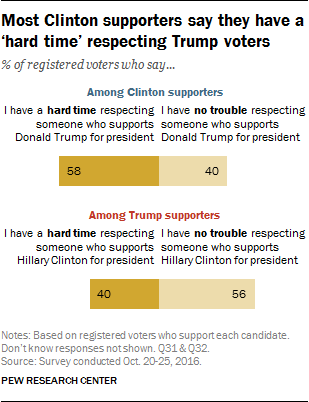 How much do the candidates respect women, other groups? 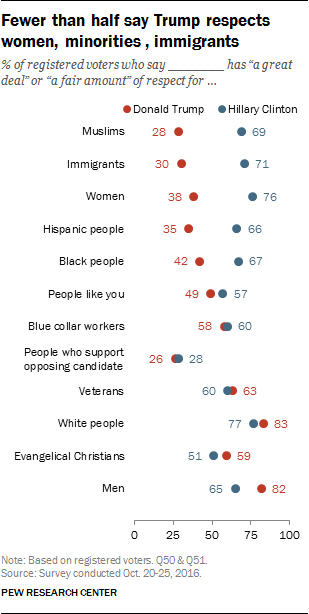 Majorities of voters say Trump has a great deal or fair amount of respect for several groups in the population, including men (82% great deal/fair amount), white people (83%), veterans (63%), blue-collar workers (58%) and evangelical Christians (59%).

But fewer than half of voters say Trump has a great deal or a fair amount of respect for blacks (42%), women (38%), Hispanics (35%) and immigrants (30%). In each case, majorities say he has little or no respect for these groups.

Just 28% of voters say Trump has a great deal or fair amount of respect for Muslims – and nearly half of voters (47%) say he has no respect at all for them.

The gaps in perceptions of Clinton’s and Trump’s respect for Muslims, women, immigrants and Hispanics are striking: More than twice as many voters say Clinton has at least a fair amount of respect for each of these groups than say the same about Trump.

More voters say Trump respects men than say that about Clinton (82% vs. 65%). And while 59% say Trump has a great deal or fair amount of respect for evangelical Christians, fewer say the same about Clinton (51%).

Views of the candidates: traits and issues 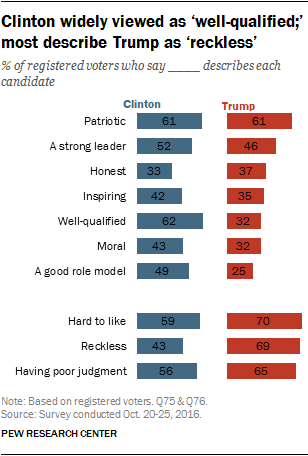 With less than two weeks to go before the election, 46% of registered voters favor Hillary Clinton or lean toward Clinton, while 40% support Trump or lean toward Trump; 6% back Libertarian Gary Johnson, while 3% support Green Party nominee Jill Stein. Earlier this month, Pew Research Center announced it will not be producing likely-voter estimates of the race or making a final projection of the popular vote. This report is based on registered voters or, in some cases, the general public.

Most Clinton voters now say they consider their choice a vote “for Clinton” rather than “against Trump” (57% vs. 41%). But just 45% of Trump supporters say they are mostly voting “for” him. In the prior four election cycles, majorities of GOP candidates’ supporters viewed their vote more in positive, rather than negative terms. 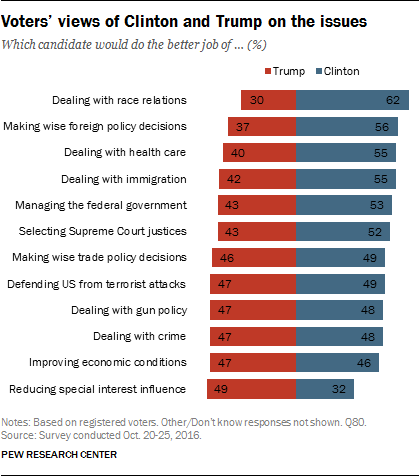 Overall, Clinton is viewed much more positively than Trump on several key character traits: Far more voters describe her as well-qualified than say that about Trump (62% vs. 32%), and the gap is nearly as wide in perceptions of whether each is “reckless.” Roughly seven-in-ten (69%) describe Trump as reckless, compared with 43% who say this word describes Clinton.

However, just 33% say Clinton is honest; a slightly larger share (37%) say this term applies to Trump. And sizable majorities say two negative descriptions – hard to like and having poor judgment – characterize both Clinton and Trump.

There is only one trait, among 10 included in the survey, on which majorities view both candidates positively: An equal share say Clinton and Trump are patriotic (61%).

Clinton has sizable advantages on several issues, though Trump runs even with her in dealing with the economy, terrorism, trade and crime.

Trump holds a significant advantage on only one issue: 49% say he would do a better job of reducing special interest influence. 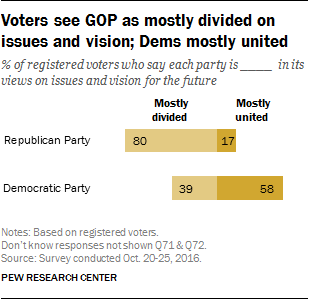 ACA continues to be divisive. Currently, 45% of voters approve of the 2010 health care law, while 53% disapprove. For more on the health care law, including views on whether Congress should repeal or expand it, see Pew Research Center’s Fact Tank blog.

Obama job approval at 54%. Obama’s job rating among the general public is little changed from August (53%), but stands at its highest point since December 2012, a month after he won reelection. Obama’s job rating has been in positive territory for most of this year.

Next: 1. Views of the candidates
← Prev Page
You are reading page1Page2Page3Page4Page5Page6Page7Page8Page9Page10
Next Page →

As Election Nears, Voters Divided Over Democracy and ‘Respect’
How much do the candidates respect women, other groups?Views of the candidates: traits and issuesOther important findings
1. Views of the candidates 2. Factors underlying voter preferences, positive and negative voting 3. Views of candidate ‘insults,’ criticism and political divisions 4. How voters view Clinton and Trump’s respect for men and women, racial and religious groups 5. Confidence in election, views of U.S. democracy 6. Views of domestic issues: race, immigration, health care, abortion, Supreme Court 7. Opinions on U.S. international involvement, free trade, ISIS and Syria, Russia and China 8. The state of the parties, Obama approval Methodology