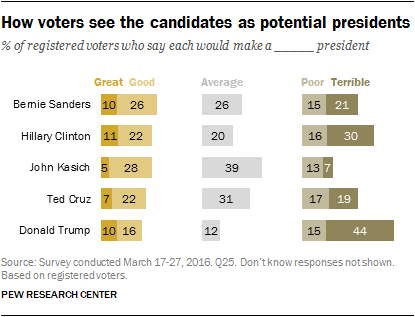 In the 2016 presidential race, registered voters remain skeptical about how each of the candidates would fare as president. No more than 36% say any of the remaining five candidates would be a good or great president, and in the case of three of the candidates (Hillary Clinton, Ted Cruz and Donald Trump), more voters say each would be a “poor” or “terrible” president than say they would be “good” or “great.” Only John Kasich is seen by more as a potentially good or great president (33%) than as a poor or terrible one (19%), with the plurality of voters (39%) saying that Kasich would make an “average” president.

Of the Democratic candidates, Clinton is somewhat more polarizing than Sanders: One-third of voters (33%) say she would be a great or good president, while 46% say she would make a poor or terrible president. Just 20% say Clinton would be an average president. Although about as many voters (36%) view Bernie Sanders’ potential presidency as good or great as say this about a potential Clinton presidency, fewer voters offer negative evaluations of a possible Sanders presidency (35%), while somewhat more (26%) say he would be average.

The share of voters saying a Kasich presidency would be good or great has grown from just 13% in January to 33% today, and somewhat fewer now say he would make a poor or terrible president (19% today, 24% then). In January, nearly a third of voters (31%) did not offer an opinion about a possible Kasich presidency; today 9% do not. Although overall views of most other candidates as possible presidents are little changed over the last few months, the share of voters who say Trump would be a poor or terrible president is up seven points (from 52% to 59%).

Partisans’ views of the candidates as possible presidents 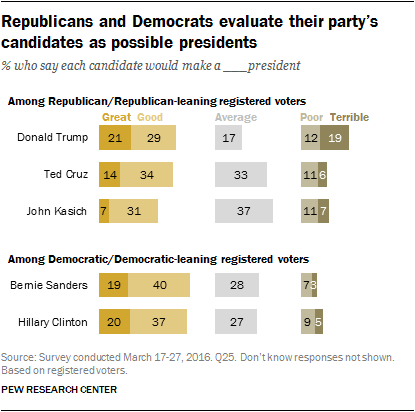 About four-in-ten Republican voters (38%) now say Kasich would make a good or great president, while roughly as many say he would be an average one (37%); 18% say he would be poor or terrible.

Although fewer GOP voters rate a potential Kasich presidency as good or great than say this of Trump or Cruz, evaluations of Kasich as a possible president have grown significantly more positive over the course of the last two months. Today 38% of GOP voters say Kasich would be a good or great president, up from 17% in January, and just 18% say he would be poor or terrible (25% in January).

Among Democratic voters overall, Clinton and Sanders are viewed similarly. Roughly six-in-ten say Clinton (57%) and Sanders (59%) would make good or great presidents, while nearly three-in-ten say they would be average presidents. 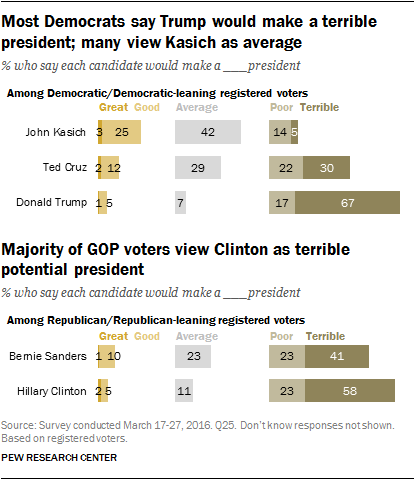 The share of Democratic voters saying Clinton would make a good or great president is down seven points since January (64% then, 57% today), while views of Sanders’ potential presidency as good or great have increased by a similar share (51% then, 59% today). As was the case in January, few today say either Clinton (14%) or Sanders (10%) would be poor or terrible presidents.

Democratic voters remain intensely negative in their evaluations about a potential Trump presidency. Fully 84% say he would make a poor or terrible president—including 67% who believe he would be terrible. Just 7% say Trump would be average, while 6% say he would be good or great.

Among Republican voters, a possible Clinton presidency is viewed more negatively than a Sanders presidency. Still, both are viewed as poor or terrible potential presidents by the majority of Republicans (81% say this of Clinton, 64% of Sanders).

How GOP primary backers view the other Republican candidates 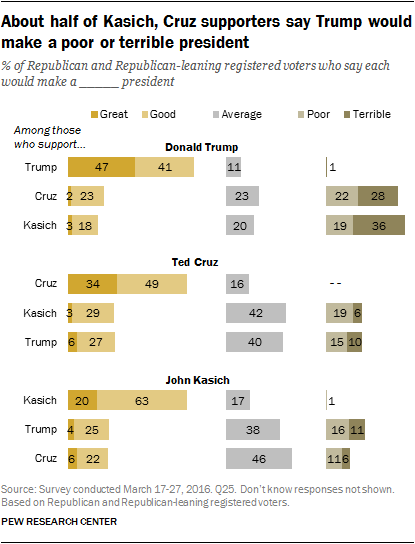 How supporters view Sanders and Clinton as possible presidents 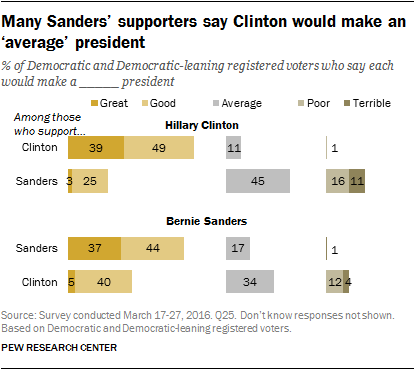 More than eight-in ten supporters of Clinton (88%) and Sanders (82%) say their candidate would make a good or great president. But views about their intraparty opponent are not as overwhelmingly positive. 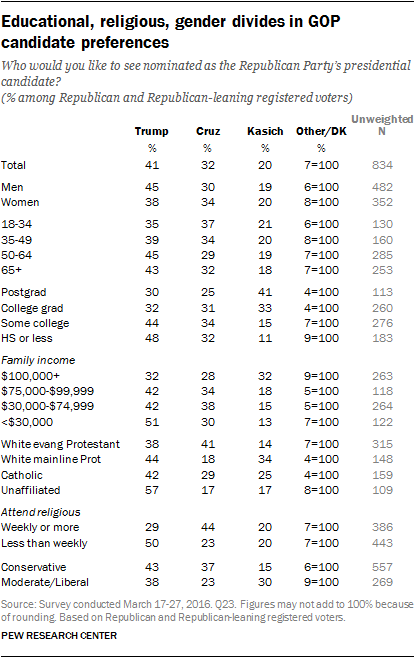 Trump performs better among Republican men than women. While significantly more Republican men back Trump (45%) than support either of the other GOP candidates (30% Cruz, 19% Kasich), the proportion of women who prefer Trump is little different than the share who back Cruz (38% Trump, 34% Cruz).

There are only modest age differences in GOP candidate support, with older people slightly more likely than younger people to back Trump. But there are substantial educational, income and religious differences.

Among white evangelical Protestant Republican voters, support is roughly divided between Trump (38%) and Cruz (41%), while a clear majority (57%) among the smaller share of the GOP electorate that is religiously unaffiliated supports Trump. Republican voters who regularly attend religious services are more likely to back Cruz (44%) than either Trump (29%) or Kasich (20%), while Trump leads among less frequent attenders. 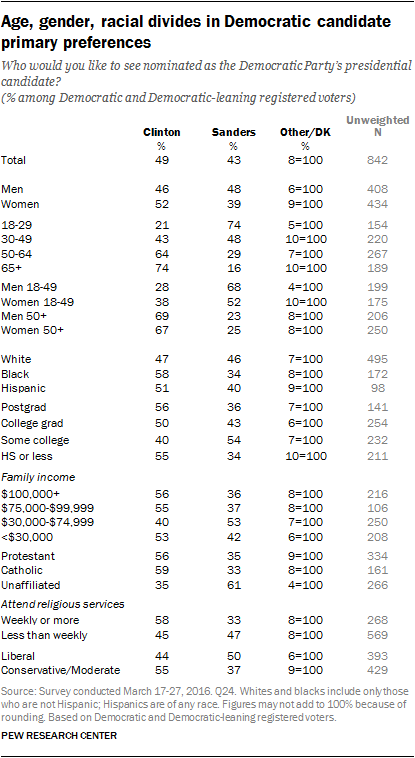 Hillary Clinton is supported by 49% of Democratic and Democratic-leaning registered voters, while Bernie Sanders is backed by 43%.

There are substantial age and gender differences in support for the two Democratic candidates.

But gender differences are particularly pronounced among younger people: There is a 16-point gap among those under 50 in support for Sanders between Democratic men and Democratic women (68% vs. 52%). By comparison, there is no gender gap among Democratic voters ages 50 and older (69% of men and 67% of women back Clinton).

Black Democratic voters are more likely than whites to support Clinton (58% vs. 47%). Clinton also performs better among Democrats who regularly attend religious services (58% vs. 45% among those who attend less frequently), and among self-identified conservatives and moderates (55% vs. 44% among those who identify as liberal).

Would Trump and Clinton unite their parties? 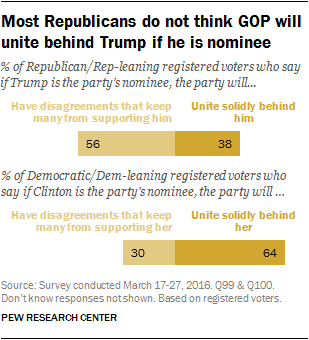 A 56% majority of Republican registered voters expect that disagreements within the GOP will keep many Republicans from supporting Donald Trump if he becomes the party’s nominee; just 38% say the party will unite solidly behind him.

By contrast, 64% of Democratic voters say the Democratic Party will unite solidly behind Hillary Clinton if she becomes the party’s nominee, while just 30% expect that disagreements within the party will keep many from supporting her. 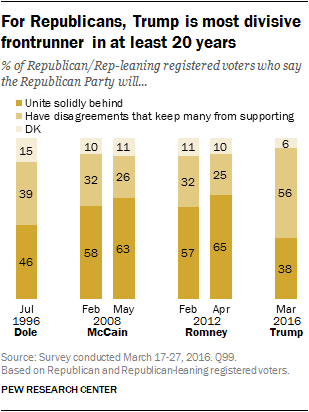 But the share of Republican and Republican-leaning registered voters who say the Republican Party will unite solidly behind Trump (38%) is far lower than for other GOP frontrunners in elections dating back to 1996.

In both 2008 and 2012, clear majorities of Republican voters expected the GOP would unite behind John McCain and Mitt Romney, respectively. And in 1996, about as many said the party would unite behind Bob Dole as said disagreements would keep many from supporting him (46% vs. 39%). 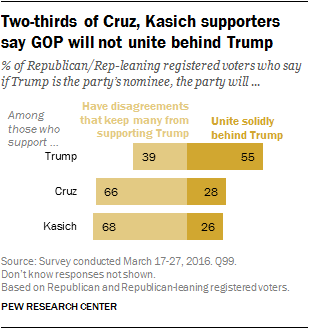 Among Republicans, about two-thirds of those who support Ted Cruz (66%) and John Kasich (68%) say the disagreements within the GOP would keep many Republicans from uniting behind Trump if he were to become the nominee, while roughly a quarter of each say the party would unite behind Trump. More than half of Trump supporters (55%) expect Republicans to unite behind him, while 39% say they expect divisions to prevent many from supporting their candidate. 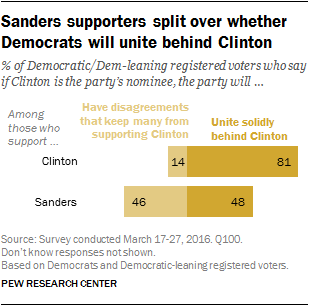 Though Democrats overall are more optimistic about the party’s ability to unite behind Clinton if she becomes the nominee, Sanders supporters are divided on this question: About half (48%) say the party will come together to support Clinton, while about as many say disagreements within the party will keep many from supporting her (46%). By an overwhelming margin, most Clinton supporters say that the party will unify behind her (81% say this).

Campaign Exposes Fissures Over Issues, Values and How Life Has Changed in the U.S. 1. Views of the primaries, press coverage of candidates, attitudes about government and the country 2. Views on immigration, diversity, social issues 3. Views on economy, government services, trade
4. Perceptions of the presidential candidates, and primary preferences
Partisans’ views of the candidates as possible presidentsHow GOP primary backers view the other Republican candidatesHow supporters view Sanders and Clinton as possible presidentsThe GOP primary raceThe Democratic primary raceWould Trump and Clinton unite their parties?
Methodology