As candidates in both parties prepare for the next round of presidential debates, a new national survey finds that the public is highly engaged by the 2016 campaign. Fully 74% of Americans say they have given a lot or some thought to the candidates, higher than the shares saying this at comparable points in the past two presidential campaigns. 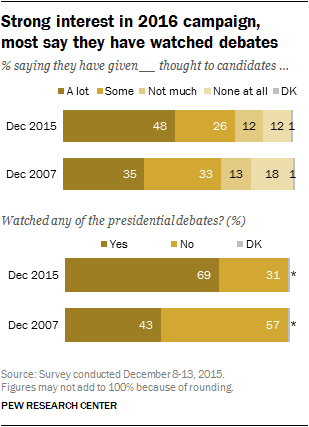 The presidential debates clearly have been a hit with the public. Nearly seven-in-ten (69%) say they have watched at least some of the televised debates between the candidates. In December 2007 – the most recent election in which there were contested nominations in both parties – just 43% reported watching any of the debates.

The latest national survey by Pew Research Center, conducted Dec. 8-13 among 1,500 adults, finds that nearly two-thirds (65%) of those who watched the debates say they have been helpful in learning about the candidates. And about half of debate watchers (51%) say they have found the debates “fun to watch.” 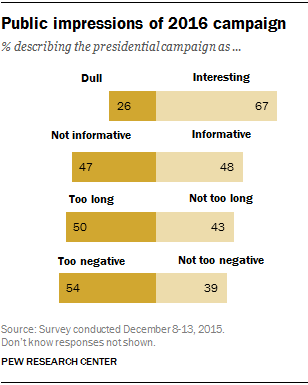 Yet the public has mixed impressions of the campaign so far. Two-thirds (67%) describe the presidential campaign as interesting – far more than did so before the first primary contests in the 2012 and 2008 campaigns (36% and 37%, respectively). About half (48%) say the campaign is informative, which is identical to the share that described the campaign as informative in January 2012. 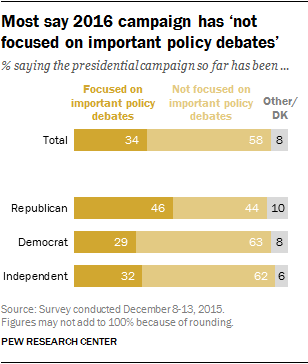 As during prior campaigns, many Americans view the current contest as “too negative” (54% describe the campaign this way) and “too long” (50%). 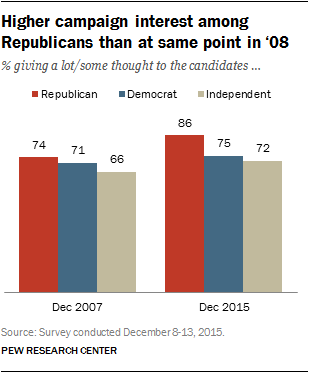 And Republicans are substantially more engaged in the current campaign than they were at this point in the 2008 campaign; in December 2007, 74% of Republicans had given a lot or some thought to the candidates running for president.

While large majorities in both parties – and across nearly all demographic categories – say they have watched the debates, 77% of Republicans report watching at least some of the debates, compared with 69% of Democrats and 67% of independents.

Impressions of the presidential campaign

Across a range of measures, Republicans generally have more positive impressions of the campaign so far than do Democrats or independents. 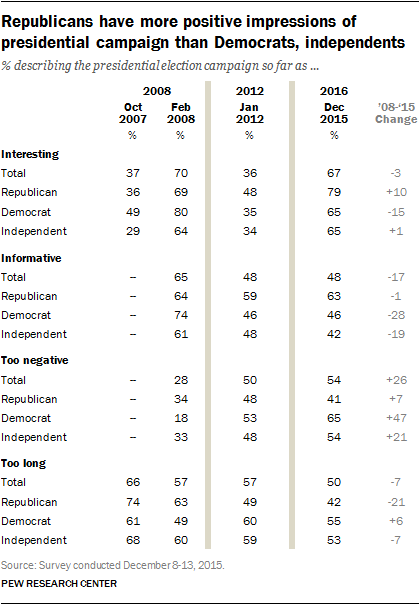 Views of the debates 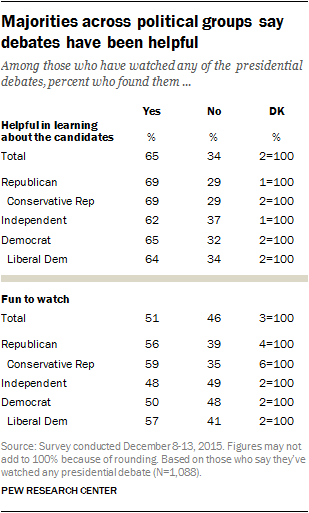 Among the 69% of the public that says they have watched any of the presidential debates, most say they have found them helpful but views are more mixed on whether they have been fun to watch. 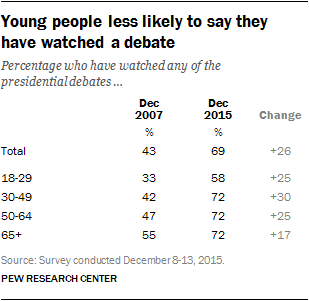 As in past election cycles, young adults under 30 are less likely than older adults to say they have watched a presidential debate. 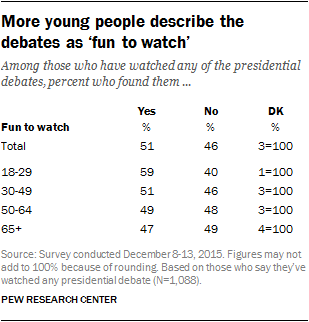 When it comes to whether the debates have helped watchers learn about the candidates, there are virtually no differences by age. For example, 70% of those under the age of 30 and 68% of those 65 and older say the debates have been helpful.