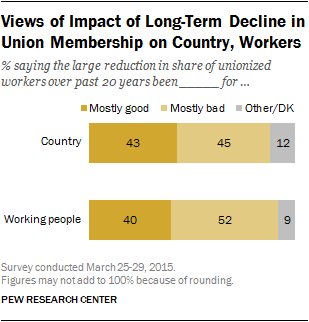 Over the past three decades, the share of wage and salary workers in the United States who belong to labor unions has fallen by about half. The public expresses mixed views of the impact of the long-term decline in union membership on the country: 45% say this has been mostly a bad thing, while 43% see it as mostly a good thing.

However, the effects of the decline in union membership on working people is seen in more negative terms: 52% say the reduction in union representation has been mostly bad for working people, compared with fewer (40%) who say it has been mostly good. The balance of opinion on this question is about the same as it was in a 1994 NBC/Wall Street Journal survey that asked about the previous 20 years. 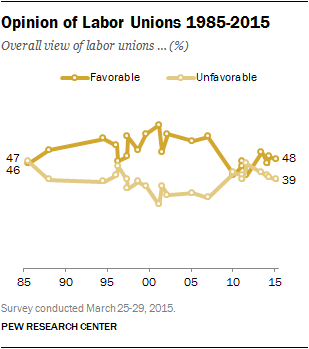 The latest national survey by the Pew Research Center, conducted March 25-29 among 1,500 adults, finds little recent change in overall favorability of labor unions: 48% hold a favorable view of unions, while somewhat fewer (39%) say they have an unfavorable view. Opinions of unions have recovered from lows reached in 2010 and 2011. 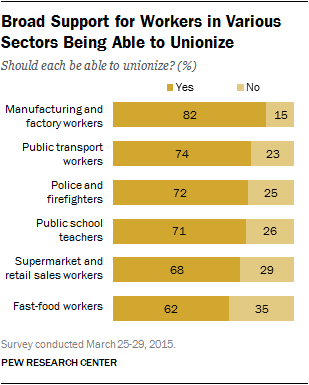 While the public expresses mixed views of unions overall, majorities of Americans say many different types of employees in specific sectors should be able to unionize.

Among the six sectors tested in the survey, support for workers’ ability to form a union is highest for factory and manufacturing workers: 82% say these workers should be able to unionize, while just 15% say they should not be able 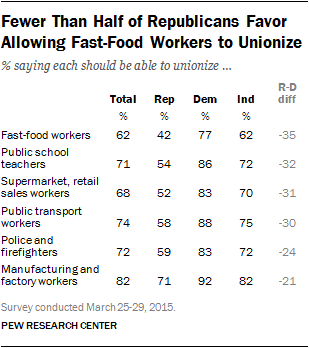 There are sharp partisan differences in views of labor unions, including in opinions about workers being able to unionize. Among Democrats, support for the ability to form a union ranges from 77% for fast-food workers to 92% for manufacturing and factory workers.

However, just 42% of Republicans favor allowing fast-food workers to form unions; 54% say they should not able to unionize.

Democrats See Decline in Unionization as Bad for Country, Workers

Majorities of Democrats say the decline in union representation over the past two decades is mostly bad for the country (59%) and for working people (62%).

Republicans, by about two-to-one (62% to 29%), say the long-term reduction in union representation has been mostly good for the country.

Republicans have more mixed views of the decline’s impact on working people: about half (51%) say the reduction in union representation has been mostly good for workers, compared with 39% who say it has been mostly bad.

Across demographic groups, there are wide differences in overall favorability ratings of labor unions. Among blacks, who are more likely than other racial and ethnic groups to be union members, 60% hold a favorable view of unions; by comparison, 49% of Hispanics and 45% of whites view unions favorably.

Across age groups, views of unions are most positive among young adults: 55% of those ages 18-29 view unions favorably, while just 29% view them unfavorably. Among older adults, favorability ratings of unions are mixed with about as many holding favorable as unfavorable views. 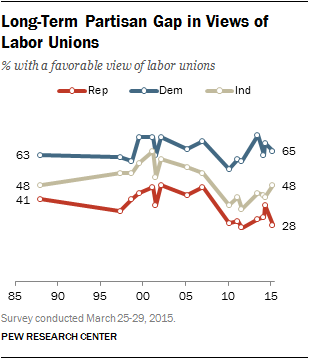 Divides Within GOP on Labor Unions

While Republicans hold much more negative views of labor unions than Democrats and independents, there also are differences in views of unions within the GOP. 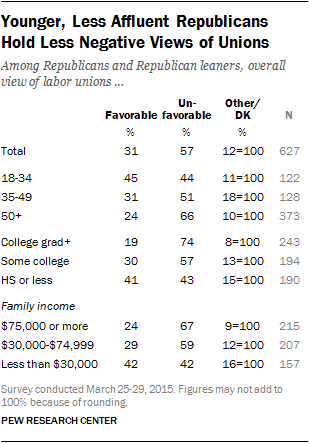 Republicans and Republican leaners with no more than a high school education are about twice as likely as those with a college degree to view unions favorably (41% vs. 19%). A similar pattern is seen among Republicans across incomes levels, with those earning less expressing mixed views and higher earners holding unfavorable views of unions. 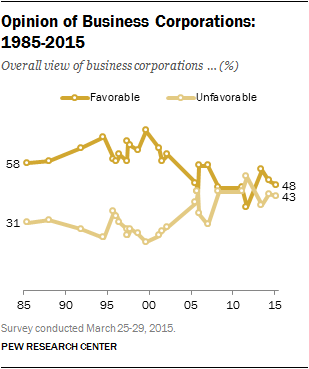 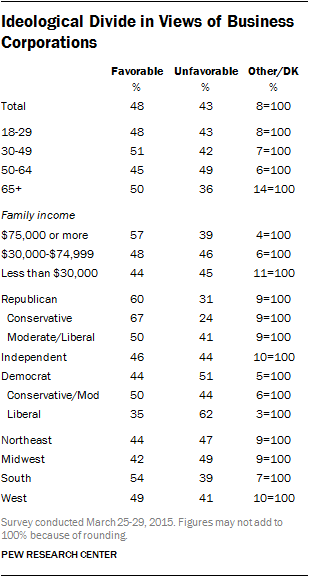 Mixed Views of Impact of Long-Term Decline in Union Membership
Survey ReportDemocrats See Decline in Unionization as Bad for Country, WorkersDemographic Differences in Views of Labor UnionsDivides Within GOP on Labor UnionsFavorability of Business Corporations
About the Survey