The public has a more positive than negative view of Israeli Prime Minister Benjamin Netanyahu ahead of his address to a joint session of Congress next week. About four-in-ten (38%) have a favorable opinion of the Israeli leader, compared with 27% who hold an unfavorable view. Roughly a third (35%) express no opinion of Netanyahu, including 23% who say they have never heard of him. 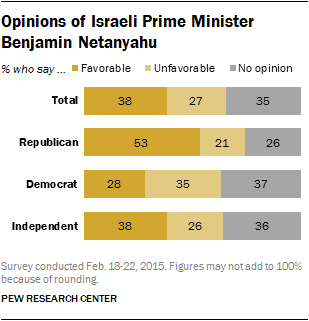 Netanyahu will address Congress on March 3 at the invitation of House Speaker John Boehner and congressional Republicans. Netanyahu is better known – and viewed much more favorably – among Republicans than among Democrats or independents. 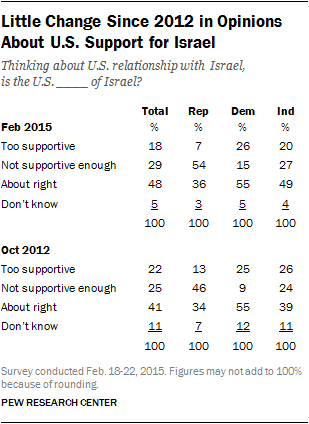 There have long been wide differences among religious groups in opinions about Israel, with white evangelical Protestants consistently expressing more support for Israel. Last August, 59% of white evangelical Protestants said they sympathized with Israel “a lot” in its dispute with the Palestinians. No more than about a third in other major religious groups expressed a great deal of sympathy for Israel. 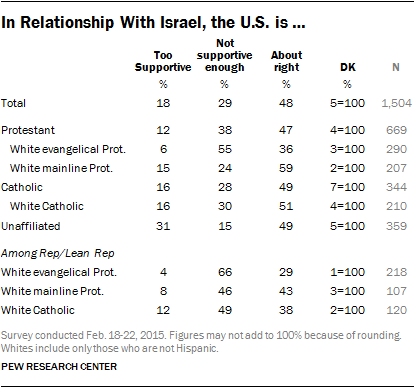 These differences also are reflected in the current poll: 55% of white evangelicals think the United States is not supportive enough of Israel. Among other groups, majorities or pluralities say U.S. support is about right.

Religious affiliation and partisanship are strongly associated. White evangelical Protestants are far more likely to affiliate or lean toward the Republican Party than those in other religious traditions (75% in the current survey) and this accounts for a significant amount of the differences between religious groups in their in views on U.S. support for Israel. Nevertheless, religious affiliation is independently associated with these views. Among Republicans and Republican leaners, white evangelicals are more likely than those of other religious traditions to say the U.S. is not supportive enough of Israel: 66% say this, compared with 46% of Republican white mainline Protestants and 49% of Republican white Catholics.

The current survey does not include a large enough sample of Jews to analyze. Jewish views on this question can be found in the Pew Research Center’s 2013 survey of Jewish Americans. In that survey, conducted February-June 2013, 54% of Jews said U.S. support for Israel was about right, 31% said the U.S. was not supportive enough and 11% said it was too supportive. 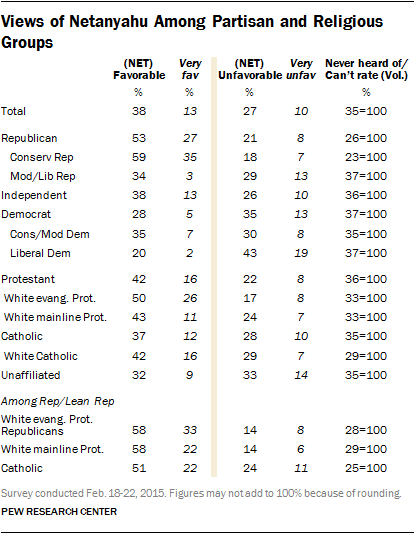 There are no significant differences in opinions of Netanyahu by religious tradition among Republicans and Republican leaners. 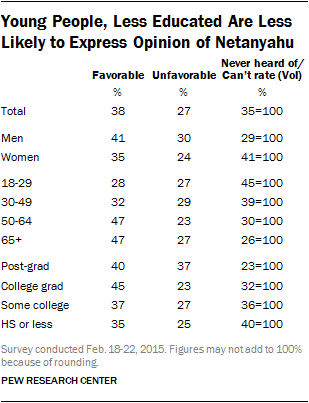 Across most partisan and religious groups, relatively large shares do not express an opinion of Netanyahu. Even among conservative Republicans, who are among the most likely to have an opinion of him, nearly a quarter (23%) do not.

The share of Americans not offering an opinion of the Israeli Prime Minister is largely made up of those who are unfamiliar with him. Overall, 35% say either they have never heard of him (23%) – the predominant response – or can’t rate him (10%) or simply decline to answer (3%).

The percentages saying they have never heard of Netanyahu are higher among women than men (27% vs. 19%), those under 30 years of age compared with those 65 and older (37% vs. 12%), and those without college experience compared with college graduates (29% vs. 13%).

More View Netanyahu Favorably Than Unfavorably; Many Unaware of Israeli Leader
Survey ReportNetanyahu Popular Among Conservatives
About the Survey