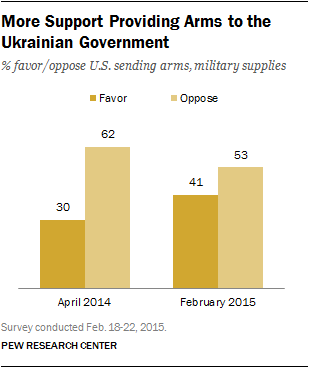 As fighting continues in eastern Ukraine between government forces and Russian-backed rebels, the public has become more supportive of sending arms to the Ukrainian government and increasing sanctions on Russia.

More still oppose (53%) than favor (41%) the U.S. sending arms and military supplies to the Ukrainian government, but support for arming Ukraine is up 11 points since April 2014, when opposition outweighed support by about two-to-one (30% favored, 62% opposed). 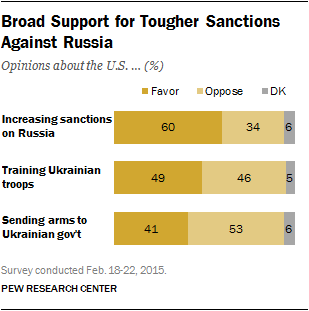 The latest national survey by the Pew Research Center, conducted Feb. 18-22 among 1,504 adults, finds the public is split over whether the U.S. should provide training to Ukrainian troops: 49% say they would favor this, while 46% are opposed.

Opinions about Russian President Vladimir Putin are very negative: 70% hold an unfavorable view of Putin – including 41% with a very unfavorable view – compared with just 12% who view him favorably; 18% offer no opinion of the Russian leader.

And most Americans (77%) say what happens between Russia and Ukraine is either very important (30%) or somewhat important (46%) to the interests of the U.S. The share saying the conflict is very important to U.S. interests is lower than it was in July 2014 (48%), shortly after a Malaysia Airlines plane was shot down over rebel-held territory in Ukraine but is about the same as in April of last year (31%).

Republicans are more likely than Democrats and independents to back the U.S. training Ukrainian troops and sending arms and military supplies to the Ukrainian government. 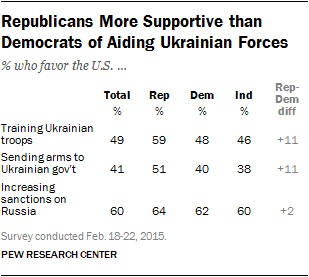 Overall, 51% of Republicans support the U.S. sending arms and military supplies to the Ukrainian government, while 45% are opposed. By contrast, Democrats (55% oppose, 40% favor) and independents (56% oppose, 38% favor) on balance oppose the U.S. taking these actions. Despite current differences in views, both Republicans and Democrats have become 14 points more likely to support the U.S. arming the Ukrainian government since last April.

Republicans (59%) also are more likely than Democrats (48%) or independents (46%) to support the U.S. providing training to Ukrainian military troops.

There is no partisan divide when it comes to increasing economic and diplomatic sanctions on Russia. About equal percentages of Republicans (64%), Democrats (62%) and independents (60%) support this action. 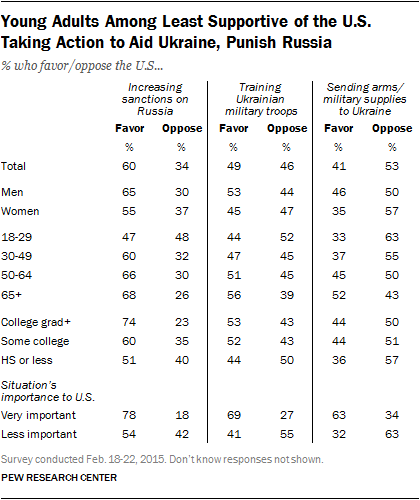 Across all three policy options included in the survey, young adults under 30 are among the least supportive of U.S. action. Just 33% of young adults favor sending arms to the Ukrainian government, compared with 52% of those 65 and older. And when it comes to both increased sanctions on Russia and training Ukrainian troops, about as many young adults oppose as favor U.S. action; among older adults, more favor than oppose the U.S. taking these steps.

Among the 30% of the public that views the events between Russia and Ukraine as very important to the interests of the U.S., large majorities back increased sanctions against Russia (78%), the U.S. training Ukrainian military troops (69%) and the U.S. sending arms and military supplies to the Ukrainian government (63%).

Putin is viewed unfavorably across all demographic groups. Com 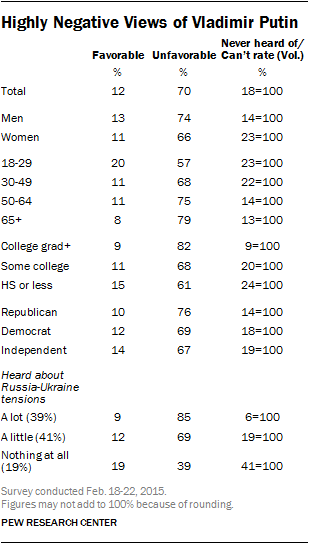 Young adults hold some of the least negative views of Putin. Among those ages 18-29, 57% view him unfavorably, while 20% view him favorably; 23% are unable to offer a rating. Among older adults, about 70% or more view Putin unfavorably.

Opinions about Putin also differ by awareness of the situation in Ukraine. Among the nearly four-in-ten (39%) who have heard a lot about tensions between Russia and Ukraine, fully 85% view Putin unfavorably. That compares with 69% among those who have heard a little about the tensions between the two countries (41% of the public); 19% of this group offer no opinion of Putin. Among the 19% who have heard nothing at all about this situation, 41% have no opinion of the Russian leader, 39% view him unfavorably, while 19% have a favorable impression.