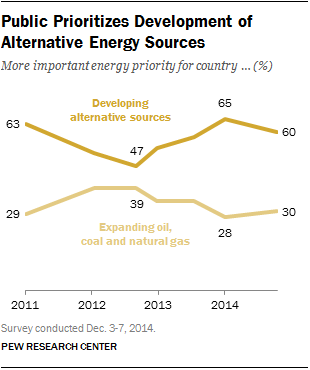 The public is gradually becoming aware of America’s energy boom. Currently, 54% say domestic energy production has been increasing in recent years, up from 48% in September 2013. Meanwhile, the recent slide in gas prices is registering widely: An overwhelming 89% say that that pump prices have fallen in the past month.

Despite the growth of domestic energy production, public attitudes about energy policies have changed only modestly in recent years. In broad terms, developing alternative energy is viewed as a more important priority than expanding the exploration and production of oil, coal and natural gas. By two-to-one (60% to 30%), more prioritize the development of alternative energy sources than expanded extraction of energy from traditional sources.

Yet when asked about specific policies to address the energy supply, a majority of Americans continue to support allowing more offshore oil and gas drilling in U.S. waters (56%) and more mining and drilling on federally-owned land (58%). These opinions are largely unchanged from recent years. 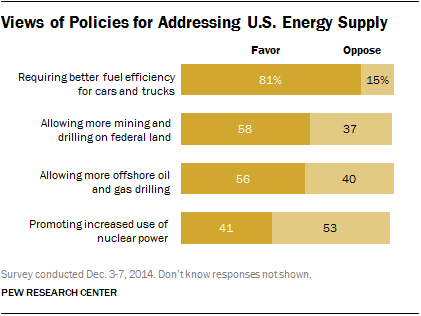 In November, the Pew Research Center found that the public continues to favor construction of the Keystone XL pipeline, though by a smaller margin than a year earlier. About six-in-ten (59%) favor building the pipeline while 31% are opposed. 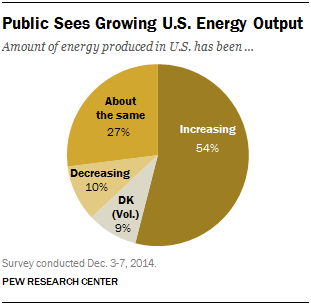 Furthermore, the drop in gas prices around the country has registered widely: Fully 89% say that gas prices have gone down either a lot (50%) or a little (39%) over the past month; just 8% say they have gone up at a little or a lot.

While the public prioritizes developing alternative sources of energy over expanding production of fossil fuels by a 60%-30% margin, attitudes on this question vary widely across demographic groups.

Adults under 30 express broad support for prioritizing alternative energy development over expanding traditional sources (74%-20%). By contrast, those 65 and older are roughly divided over whether developing sources such as wind, solar and hydrogen is the more important priority (48%) or whether expanding production of oil, coal and natural gas should be given more priority (41%).

By a 53%-36% margin, more Republicans prioritize the production of oil, coal and natural gas over the development of alternative sources of energy. By contrast, 72% of Democrats and 66% of independents say developing alternative energy sources should be the country’s more important priority.

Across regions, support for prioritizing alternative energy development is lowest in the South (52%). At least six-in-ten in the Midwest (62%), Northeast (66%) and West (67%) say it’s more important to develop alternative sources such as wind, solar and hydrogen technology than to expand the exploration and production of oil, coal and natural gas. 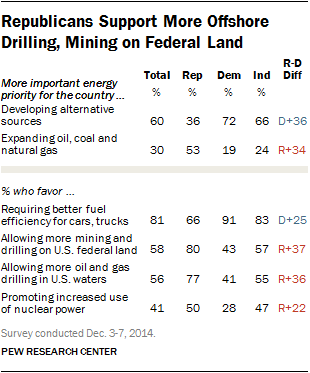 There also are wide differences between Republicans and Democrats in their support for specific U.S. energy policies.

The increased use of nuclear power is not especially popular with either party, though significantly more Republicans (50%) than Democrats (28%) back this policy. 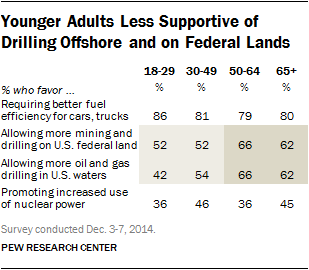 Consistent with the high priority younger adults place on developing alternative sources of energy, they are less supportive of expanded mining and drilling in the U.S. than are older Americans.

Age divides are less prominent when it comes to fuel efficiency standards for cars and trucks, and promoting the increased use of nuclear power. Broad majorities of all age groups support requiring better fuel efficiency for cars, trucks and SUVs. On nuclear power, fewer than half across all age groups say they favor promoting its increased use in the U.S.