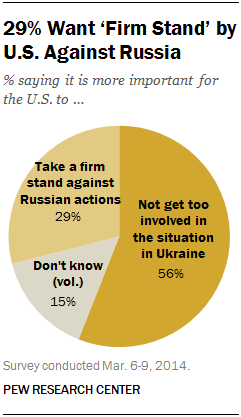 As Russian troops remain in Ukraine’s Crimea region and Crimea’s Parliament has set up a secession vote, Americans prefer the U.S. to not get too involved in the situation.

By a roughly two-to-one margin (56% vs. 29%), the public says it is more important for the U.S. to not get involved in the situation with Russia and Ukraine than to take a firm stand against Russian actions.

The new national survey by the Pew Research Center, conducted March 6-9, 2014 among 1,003 adults, finds more disapprove (44%) than approve (30%) of the way the Obama administration is handling the situation involving Russia and Ukraine, while roughly a quarter (26%) offer no opinion. 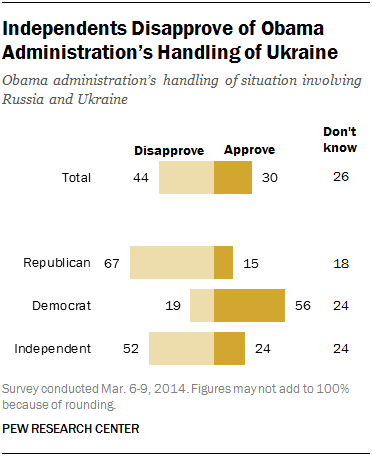 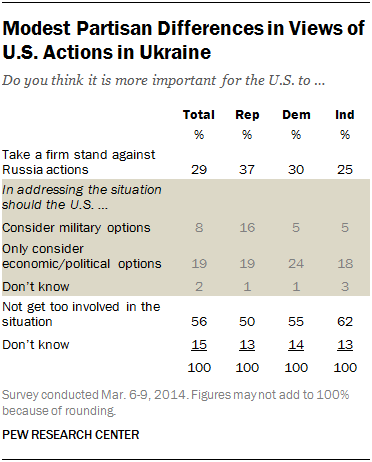 Among Democrats, 55% prefer not getting too involved and three-in-ten (30%) say the U.S. should take a firm stand.

Those who say it is more important for the U.S. taking a firm stand against Russian actions in Ukraine were asked if the U.S. should consider military options or only political and economic options. Most of this group – 19% of the public overall – said the U.S. should consider only political and economic options in addressing the situation, while just 8% of the public think that military options should be considered.

Just 16% of Republicans and smaller shares of Democrats and independents (5% each) say that military options should be considered.

By comparison, the early stage of the conflict between Russian and Georgian forces in August 2008 drew lower interest; shortly after the conflict began, 17% tracked news about the situation very closely. Interest rose the following week (to 35% following very closely) and then declined. By the end of August 2008, as news coverage of the situation decreased, 22% said they were paying very close attention to the Russia-Georgia conflict. 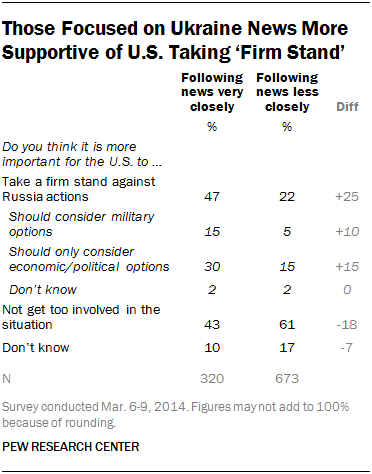 But among those paying less attention, a much greater share say it is more important not to get too involved (61%) than to take a firm stand (22%). Among both groups, however, wide majorities say Russia was not justified in sending troops and more disapprove than approve of how Obama has handled the situation. There are no significant differences in the shares of Republicans, Democrats and independents following this story very closely. 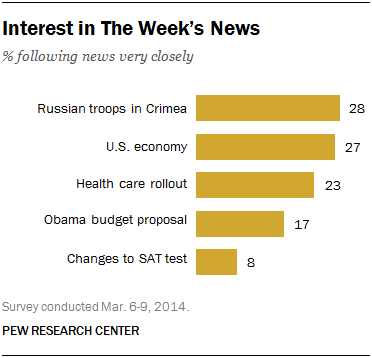 News interest last week about Russian troops in Crimea was highest among those with higher education levels. Roughly four-in-ten (38%) college graduates very closely followed the story, compared with about three-in-ten people (29%) with some college education and two-in-ten (20%) with a high school degree or less.

Most Say U.S. Should ‘Not Get Too Involved’ in Ukraine Situation
Survey ReportThe Week’s News
About the Surveys