There is broad public agreement that economic inequality has grown over the past decade. But as President Obama prepares for Tuesday’s State of the Union, where he is expected to unveil proposals for dealing with inequality and poverty, there are wide partisan differences over how much the government should – and can – do to address these issues. 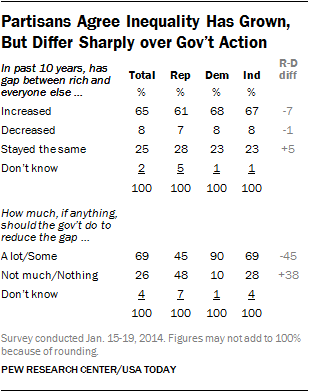 The new national survey by the Pew Research Center and USA TODAY, conducted Jan. 15-19 among 1,504 adults, finds that 65% believe the gap between the rich and everyone else has increased in the last 10 years. This view is shared by majorities across nearly all groups in the public, including 68% of Democrats and 61% of Republicans.

The Pew Research Center’s Fact Tank blog contains several posts exploring issues of poverty and income inequality. For more on this topic, including different ways to measure economic inequality and how the U.S. compares to the rest of the world, see our income inequality topic page.

The differences are somewhat less stark when it comes to views of government action in reducing poverty: Nearly all Democrats (93%) and large majorities of independents (83%) and Republicans (64%) favor at least some government action. However, more than twice as many Democrats as Republicans say the government should do a lot to reduce poverty (67% vs. 27%).

In part, these differences reflect divergent beliefs about the effectiveness of government action on inequality and poverty. Republicans are far less likely than Democrats to say the government can do a lot to reduce poverty and especially inequality. 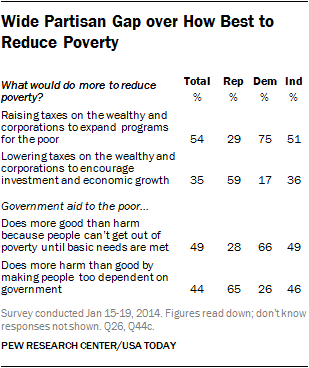 Three-quarters of Democrats favor raising taxes on the wealthy and corporations to expand programs for the poor as the better approach to lessen poverty. Republicans, by about two-to-one (59% to 29%), believe the government could do more to reduce poverty by lowering taxes on the wealthy and corporations in order to encourage more investment and economic growth.

Divisions are comparably wide when it comes to the effect of government assistance programs to the poor: By a 66% to 26% margin, most Democrats think aid to the poor helps because people can’t get out of poverty until their basic needs are met. But by a 65% to 28% margin, most Republicans believe these programs do more harm than good by making people too dependent on the government. 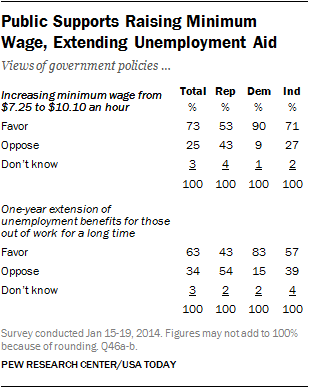 Two current policy proposals backed by the Obama administration to address poverty and the plight of the long-term unemployed draw substantial public support, although partisan differences are evident here as well.

Overall, 73% of the public favors raising the federal minimum wage from its current level of $7.25 an hour to $10.10 an hour. And 63% back a one-year extension of unemployment benefits for those who have been out of work a long time. Both issues receive nearly unanimous support from Democrats and are favored by wide margins among independents but divide the GOP. 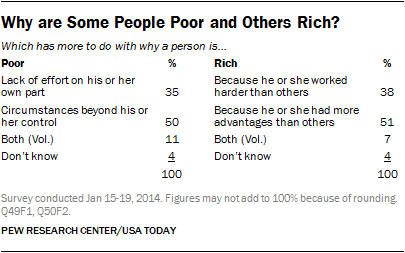 The survey finds that more people think that circumstances beyond an individual’s control (50%) – rather than a lack of hard work (35%) – are generally to blame if a person is poor.

Similarly, more say that factors beyond an individual’s control have more to do with someone being rich. About half (51%) say having greater advantages than others generally has more to do with why a person is rich, while 38% say it is because they worked harder than others. 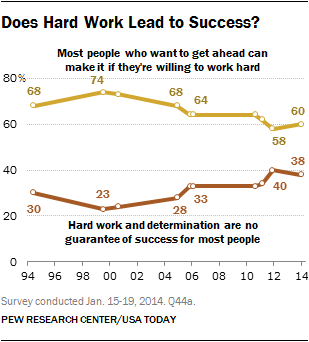 Moreover, by a 60% to 36% margin, most Americans feel the economic system unfairly favors the wealthy, as opposed to being fair to all.

Yet amidst these skeptical views, most Americans continue to believe that opportunity exists for those who make the effort. Six-in-ten (60%) say most people who want to get ahead can make it if they are willing to work hard. Some 38% take the more pessimistic view that hard work and determination are no guarantee of success for most people. While opinions about the nexus between success and hard work have changed little since 2011, a decade ago just 28% were of the view that hard work and determination were no guarantee of success. 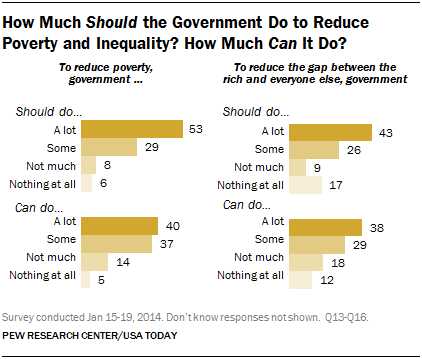 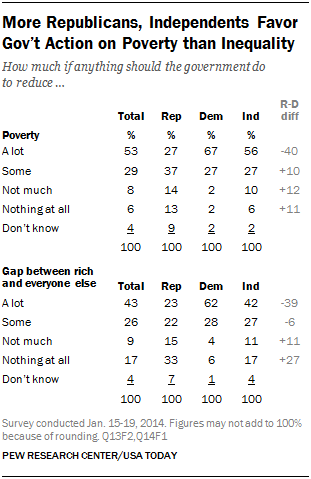 Independents also are more likely to favor a lot of government action to reduce poverty (56%) than the gap between the rich and everyone else (42%). Nearly three-in-ten independents (28%) say the government should do little or nothing to deal with inequality, almost double the percentage who favors little or no action on reducing poverty (15%).

Opinions about the Rich and Poor, Economic Fairness 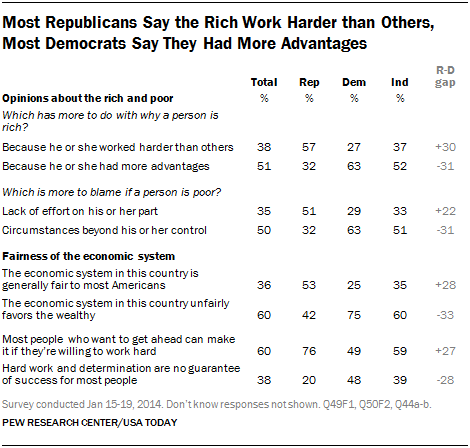 Republicans and Democrats have very different views about why some people are rich and others are poor, as well as about the fundamental fairness of this country’s economic system.

Meanwhile, Republicans are far more likely than Democrats to say that hard work and determination lead to success for most people. Fully 76% of Republicans say most people can get ahead if they are willing to work hard; just 20% say that hard work is no guarantee of success. Democrats are evenly divided: 49% say most can get ahead through hard work, but 48% say hard work is no guarantee of success.

Opinions about the factors that result in wealth and poverty differ across income categories. But higher and lower income Americans are in greater accord when it comes to their views of the fairness of the economic system. 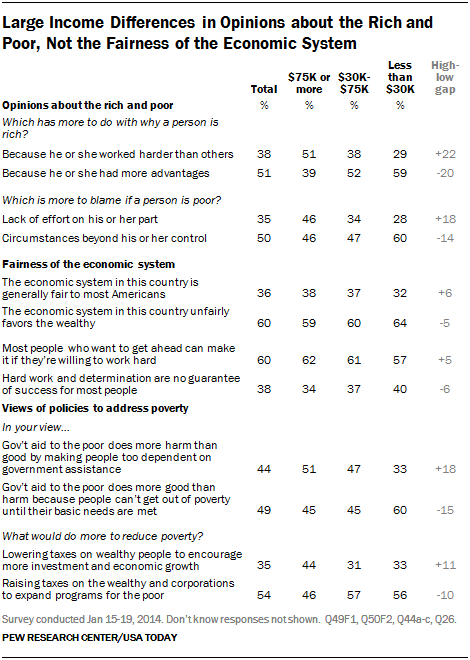 However, majorities across income categories see the economic system as tilted toward the wealthy. Yet majorities also say most people can get ahead through hard work.

Most See Inequality Growing, but Partisans Differ over Solutions
Survey ReportGovernment’s Role in Reducing Poverty and InequalityOpinions about the Rich and Poor, Economic FairnessMore Pew Research Resources
About the Survey

The many ways to measure economic inequality

Global inequality: How the U.S. compares