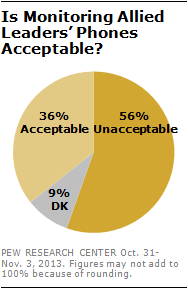 In the wake of reports that the National Security Agency (NSA) has been listening to phone calls of German Chancellor Angela Merkel and other heads of state, a 56% majority of Americans say it is unacceptable for the U.S. to monitor the phones of allied leaders, while 36% say the practice is acceptable.

There are virtually no partisan differences in these opinions. Roughly equal shares of partisans — 57% of Republicans, 53% of Democrats and 56% of independents — say that the practice is unacceptable.

News reports indicate that President Obama was unaware of the program to tap Merkel’s phone and that he might ban future eavesdropping of allied leaders. 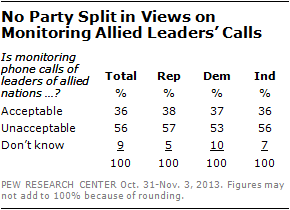 The new national survey by the Pew Research Center, conducted Oct. 31-Nov. 3 among 1,002 adults, finds that 22% say they very closely followed reports about the U.S. government’s phone and internet surveillance programs. That is similar to the share that paid very close attention to stories about government surveillance in September and over the summer. Attention was highest in mid-June, when 35% said they were following reports about the initial disclosures by Edward Snowden. 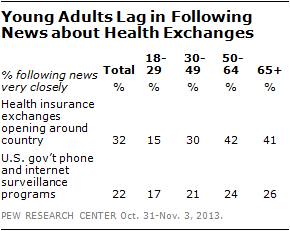 By contrast, 17% of young adults very closely followed news about the government’s surveillance programs, which is not statistically different from other age groups.