As Washington sprang into action late last week to end the furlough of federal air-traffic controllers and delays at airports across the country, the public blamed both sides for the 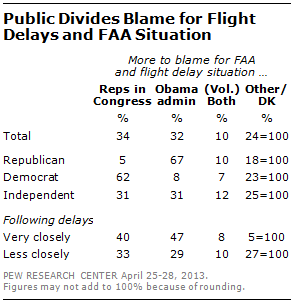 situation. Nearly equal percentages say congressional Republicans (34%) and the Obama administration (32%) are more to blame for the Federal Aviation Administration (FAA) budget cuts and airport delays. Another 10% volunteer that both sides are to blame, while 20% offer no opinion.

The national survey by the Pew Research Center, conducted April 25-28 among 1,003 adults, finds that the public has paid relatively little attention to the story: just 15% say they followed news about airport delays and the furlough of air-traffic controllers very closely, a plurality (40%) say they did not follow the story closely at all.

The public spreads the political blame for the flight delays and FAA situation more evenly than they did for broader debates over the sequester and fiscal cliff. In a Pew Research Center/Washington Post survey conducted Feb. 21-24, 2013, days before automatic spending cuts took effect, more said Republicans in Congress (45%), rather than President Obama (32%), would be more to blame if an agreement to prevent the sequester was not reached before the deadline.

Similarly, in the weeks before the fiscal cliff deadline late last year, the public said Republicans in Congress (53%) would be more to blame than President Obama (27%) for not reaching an agreement before the Dec. 31 deadline.