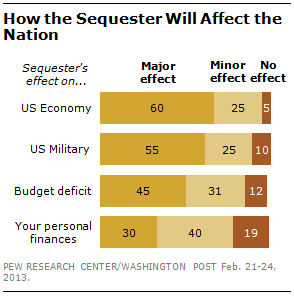 While many Americans may be resigned to seeing automatic spending cuts in the budget sequester go into effect, the public is concerned about the potential impact of the reductions. A new national survey by the Pew Research Center and The Washington Post, conducted Feb. 21-24 among 1,000 adults, finds that most say the budget sequester would have a major effect on the economy as well as on the U.S. military. And by more than three-to-one (62%-18%), the public sees the impact on the economy as mostly negative rather than mostly positive.

But signs of public fatigue after a series of fiscal crises remain apparent. Just days before automatic federal spending cuts are set to take place, only a quarter are following the issue very closely. By comparison, four-in-ten were closely tracking the fiscal cliff debate in December a full month before the deadline. 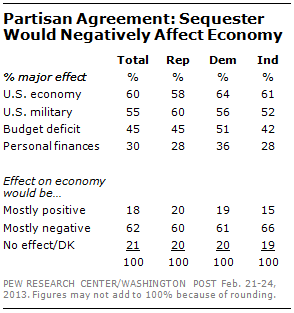 And while earlier polls have found Republicans and Democrats offering different solutions to the nation’s budget problems, there is substantial partisan agreement that the sequester will do more economic harm than good. Roughly six-in-ten Republicans, Democrats and independents alike say the sequester will have a major effect on the nation’s economy, and by overwhelming margins all agree that the effect will be negative, not positive. 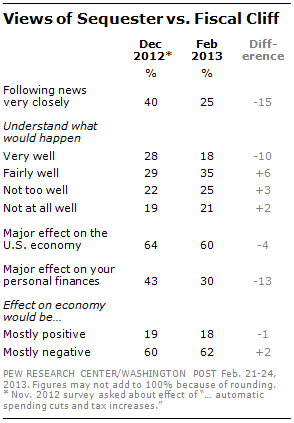 to how they viewed the fiscal cliff late last year. However, unlike the fiscal cliff, which included potential tax increases, far fewer say the looming spending cuts would have a major impact on their personal finances.

In December of last year, 64% said automatic spending cuts and tax increases would have a major effect on the economy and by a 60% to 19% margin, more thought the economic impact of going over the fiscal cliff would be mostly negative rather than mostly positive. Today, opinion about the economic impact of pending federal spending cuts is nearly identical: 60% say there would be major economic effects; and by more than three-to-one the effects are seen as negative.

By contrast, just 30% say sequester will have a major impact on their own personal finances. In December, 2012, 43% thought going over the fiscal cliff would have a major effect on their finances.

Even with just days until the sequester deadline, relatively few Americans are paying close attention to the issue. Only a quarter (25%) say they are following news about automatic federal spending cuts very closely. By comparison, 40% were following news about the pending fiscal cliff very closely in early December, several weeks before the Jan. 1 deadline. Interest in budget deficit debates was similarly high (38% very closely) in the summer of 2011, in the weeks leading up to the debt limit agreement.

Similarly, just 18% say they understand what would happen if the cuts take place “very well.” In December of 2012, 28% said they understood the fiscal cliff’s effect very well. In the current survey, partisans are about equally likely to say they have been following sequester news and that they understand the issue very well.

Who Would Be to Blame? 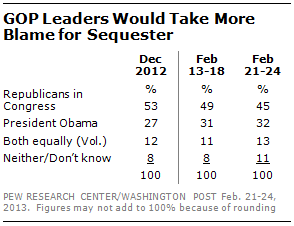 More continue to say Republicans in Congress (45%), rather than President Obama (32%), would be more to blame if an agreement to prevent automatic spending cuts is not reached before the deadline; 13% volunteer that they think both would be equally to blame. Opinion is about the same as in a Pew Research Center/USA TODAY survey conducted a week ago.

In December of 2012, a 53%-majority said Republicans in Congress would be to blame if an agreement on the fiscal cliff was not reached, just 27% said Obama would be more to blame. 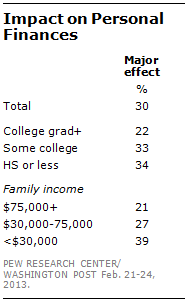 Most Say Spending Cuts Would Have Major Impact on Economy, Military
OverviewFewer See Personal Finances AffectedWho Would Be to Blame?Low-Income More Likely to Expect Hit to Personal Finances
About the Survey