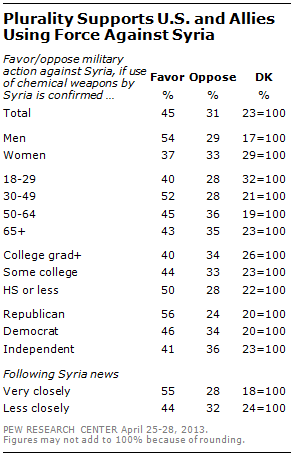 By a 45% to 31% margin, more Americans favor than oppose the U.S. and its allies taking military action against Syria, if it is confirmed that Syria used chemical weapons against anti-government groups.

Public interest in the Syrian conflict remains low, and nearly a quarter of Americans (23%) have no opinion about the use of military force in Syria.

Nonetheless, the new survey by the Pew Research Center, conducted April 25-28 among 1,003 adults, finds more public willingness to consider the use of force in Syria than did previous surveys that made no mention of the Syrian government’s alleged use of chemical weapons. In December, just 27% then said the U.S. had a responsibility to do something about fighting between the Syrian government and anti-government groups.

The survey finds that just 18% followed news about the charges that Syria used chemical weapons against anti-government groups very closely, which is little changed from interest in the Syrian conflict over the past two years.

Those who tracked news about the chemical weapons charges very closely favor the U.S. and its allies taking military action against Syria by nearly two-to-one (55% to 28%). Among those who followed Syrian news less closely, 44% favor the use of military force while 32% are opposed.

By 56% to 24%, Republicans favor the use of military force against Syria if the charges that it used chemical weapons are proven. There is less support among Democrats (46% favor vs. 34% oppose) and independents (41% favor vs. 36% oppose).

Since the Syrian conflict began in 2011, it has never drawn much attention from the U.S. public. At most, only about one-in-five have tracked developments in Syria very closely.

Other recent news stories have drawn far more public interest. A week ago, 63% say they followed news about the bombings at the Boston Marathon very closely; this week, 49% paid very close attention to the investigation into the bombings. Other domestic news stories over the past two months, including the debate over gun control (39% followed very closely), news about the economy (35%) and the budget sequester (31%) also attracted more interest than news about Syria.

Among recent foreign news stories, North Korea’s recent nuclear threats against the U.S. drew twice as much interest as charges that Syria used chemical weapons (36% vs. 18%). However, the percentage paying very close attention to news about Syria is on par with interest in news about the situation in Afghanistan (16% very closely).