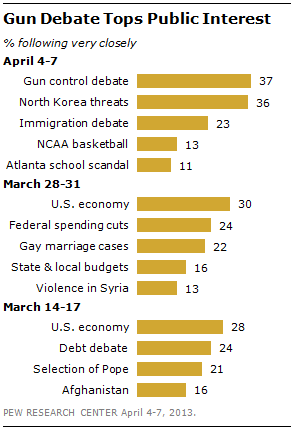 A national survey by the Pew Research Center, conducted April 4-7 among 1,003 adults, finds 37% say they are following the debate over gun control very closely. That compares with just 23% who say they are very closely following news about debate over immigration policy. Among this week’s stories, only military threats made by North Korea and its plan to restart a nuclear reactor drew about as much interest (36% very closely).

In recent weeks, no story has received more public attention than the debate over gun control. Other closely followed stories since mid-March have been news about the economy (30% very closely), news about automatic federal spending cuts (24%) and discussions about how to address the federal budget deficit and national debt (also 24%). 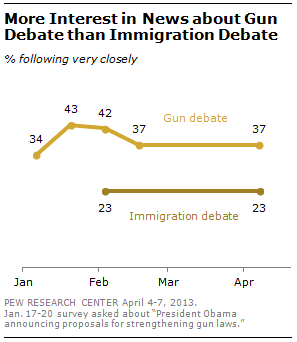 Since the start of the year, roughly four-in-ten have followed news about the gun control debate very closely on four of five surveys on which it was included. By contrast, the debate over immigration policy has drawn very close interest from 23% of the public both times it was included (Jan. 31-Feb. 3 and April 4-7).

The current survey finds only slight partisan differences in interest in the gun control debate. About four-in-ten Republicans (41%), 37% of independents and 34% of Democrats say they are following news about the debate very closely. 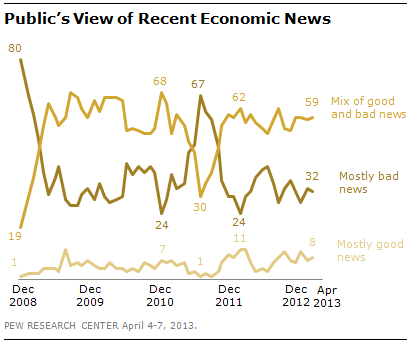 Republicans are about as likely to say they are hearing mostly bad news about the economy (48%) as mixed news (46%). Democrats are far more likely to say the economic news they have been hearing recently has been mixed (66%) rather than mostly bad (20%). Partisan views have changed little since the start of the year.