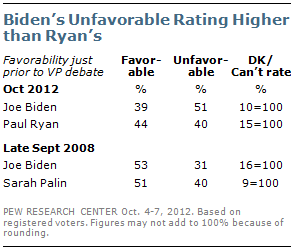 positive than it was shortly before his 2008 debate with Sarah Palin; Ryan is viewed less favorably than Palin was just prior to the last vice-presidential debate.

The national survey by the Pew Research Center for the People & the Press, conducted Oct. 4-7 among 1,511 adults, including 1,201 registered voters, finds that 39% of voters view Biden favorably, while 51% offer an unfavorable impression of the vice president. Just more than four-in-ten (44%) view Ryan favorably, while about as many (40%) have an unfavorable view.

A separate survey, also conducted Oct. 4-7, among 1,006 adults and 812 registered voters, finds that voters are divided over who will do better in Thursday’s vice presidential debate. Four-in-ten (40%) say Ryan will do a better job while 34% expect Biden to do better.

Biden’s image is little changed since September, but he is viewed less favorably than before his faceoff against Palin four years ago. In late September 2008, 53% of voters viewed Biden favorably and just 31% expressed an unfavorable opinion. At the time, Palin’s favorable rating was higher than Ryan’s is today (51% vs. 44%). 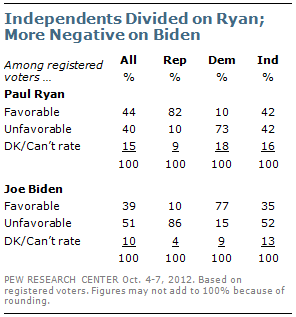 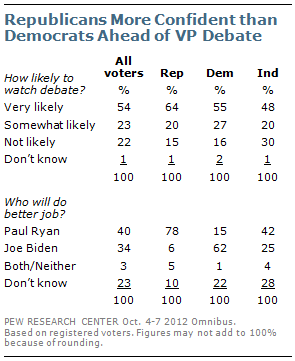 The separate survey on expectations for Thursday’s debate finds that 54% of voters say they are very likely to watch the debate. Interest in the upcoming debate is far lower than it was for the Biden-Palin debate four years ago (69% very likely to watch), though higher
than for the debate between Dick Cheney and John Edwards in 2oo4 (41% very likely).

By a 42% to 25% margin, more independents expect Ryan to do better than Biden in the debate. Most members of both parties predict victory for their party’s candidate, but Republicans are more confident than Democrats. Nearly eight-in-ten (78%) Republican voters say Ryan will do the better job in the debate. Fewer Democrats (62%) expect Biden to do better.