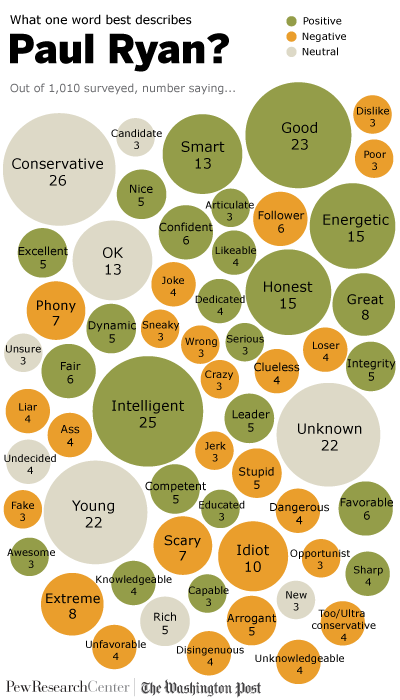 As Paul Ryan prepares to accept his nomination as the GOP’s vice presidential candidate, the American public has a mixed impression of him. When asked what one word comes to mind when thinking about Ryan, the most frequent responses are conservative, intelligent, good, unknown, and young.

In the latest national survey by the Pew Research Center and the Washington Post, conducted August 23-26 among 1,010 adults, people offer a roughly equal number of positive and negative descriptions. Of those offering a word, 37% describe Ryan in clearly positive terms, using such words as intelligent, good, energetic , honest and smart. Another 35% of the words used are clearly negative in tone, such as idiot, extreme, phony and scary. The remaining 28% of the descriptions were not clearly positive or negative, such as conservative, unknown and young. 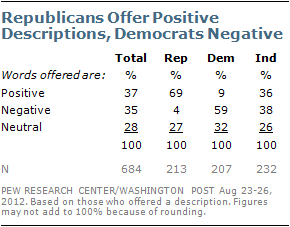 A 59% majority of Democrats offer a negative word in describing Ryan, with 32% volunteering a neutral assessment and 9% a positive word. Independents offer an equal mix of positively toned (36%) and negatively toned (38%) descriptions.

While Americans offer a wide range of descriptions of Ryan, a few themes stand out. References to his intelligence are common, with more positive assessments (25 people used the word intelligent, another 13 smart, 4 knowledgeable, 4 sharp and 3 educated) than negative (10 people called Ryan an idiot, 5 described him as stupid and 4 as clueless).

Ryan’s ideology is another often noted characteristic. The single most often used description is conservative, offered by 26 people. Another 4 people specifically identify Ryan as too conservative, while 8 call him extreme.

There are also extremes in views of Ryan’s honesty. On the positive side, 15 use the word honest to describe him, 5 offer the word integrity, and 4 dedicated. But on the negative side, 7 call Ryan phony, 4 disingenuous, 4 fake, 4 liar, and 3 sneaky.

The public’s impressions of Ryan are quite different from how people described Sarah Palin four years ago. A few weeks after her nomination, the most common word used to describe Palin was inexperienced, though many offered positive views such as strong and refreshing as well.