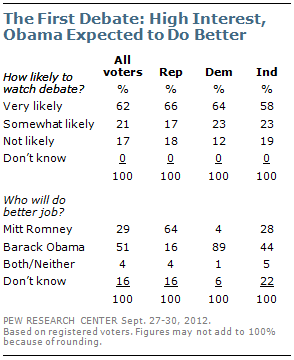 Heading into Wednesday night’s first presidential debate, voters expect that Barack Obama will do a better job than Mitt Romney. A substantial majority of voters plan to watch the debate: 62% say they are very likely to watch, another 21% say they are somewhat likely.

The latest national survey by the Pew Research Center for the People & the Press, conducted Sept., 27-30 among 1,001 adults, including 828 registered voters, finds that by a 51%-29% margin, more voters say Obama will do better than Romney in Wednesday’s debate.

Candidates and the Issues

Romney campaigns fairly low grades. However, most voters say that the candidates have been talking about the important issues.

Overall, 72% of voters say the candidates have been talking about the issues that are important to them this campaign, just 24% say they have not been. This is comparable to the percentages who said the candidates were covering top issues in September of 2008 and 2000 and somewhat higher than the percentages who said this in September 2004 and 1996. 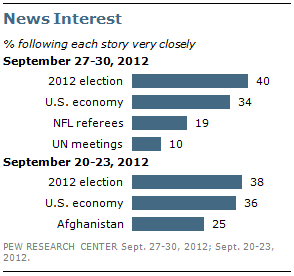 News about the candidates for the 2012 presidential election was the public’s top news story last week: 40% say they followed this news very closely, including similar percentages of Democrats (48%) and Republicans (46%); independents are following campaign news somewhat less closely (34% very closely).

About one-in-five Americans (19%) say they followed news about the controversy surrounding the National Football League’s use of replacement officials very closely. Fewer (10%) tracked news about the United Nations meetings in New York very closely. In the September 20-23, 2012 survey, a quarter (25%) said there were following the current situation and events in Afghanistan very closely.