Mitt Romney’s statement that 47% of the public is dependent on government has registered strongly with voters. Fully two-thirds of voters (67%) correctly identify Romney as the candidate who made the comments. Among those aware that Romney made comments about the “47%”, more than half (55%) have a negative reaction while just 23% react positively.

The latest national survey by the Pew Research Center for the People & the Press, conducted Sept, 27-30 among 1,005 adults, including 828 registered voters, finds that large percentages of Republican (65%), Democratic (65%) and independent voters (72%) know that Romney described nearly half of the population as dependent on government and paying no taxes.

The reaction among those aware that Romney made the comments is clearly negative. Yet they also think that news organizations are giving too much coverage to Romney’s “47%” statement. Nearly half of voters (49%) who know that Romney made those remarks say news organizations are giving the story too much coverage, while just 13% say they are giving it too little coverage; 28% say the amount of coverage has been appropriate.

The survey also finds that, more generally, voters are not too impressed with the jobs both candidates done in attempting to win them over. Only about half of voters give Barack Obama grades of A or B in convincing them to vote for him. Even fewer voters give Romney grades of A or B for persuasiveness. 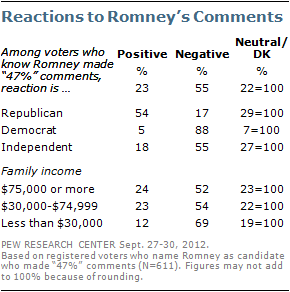 Overall, 55% of registered voters who identify Romney as the candidate who made the “47%” comments have a negative reaction to them, while fewer than half as many (23%) have a positive reaction . Nearly one-in-five (22%) react neutrally (19%) or have no opinion (3%).

GOP voters aware of Romney’s statement have mixed opinions: 54% react positively, while 29% have a neutral reaction or don’t know, and 17% react negatively.

Obama’s grades today are about the same as John Kerry’s (46% A or B) and George W. Bush’s (42%) in October 2004. Obama also gets about the same grades as did Bill Clinton in 1996, during his reelection campaign. 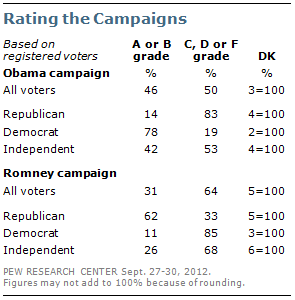 Currently, Democrats’ grades for the Obama campaign are more positive than GOP voters’ grades for the Romney’s. Nearly eight-in-ten Democratic voters (78%) give Obama a grade of A or B for convincing them to vote for him; 62% of Republican voters give Romney equivalent grades. Independent voters also give the Obama campaign higher marks (42% A or B) than the Romney campaign (26% A or B).

Romney’s ’47%’ Comments Criticized, But Many Also Say Overcovered
OverviewGOP Voters’ Mixed Views of Romney CommentsGrading the Campaigns
About the Survey