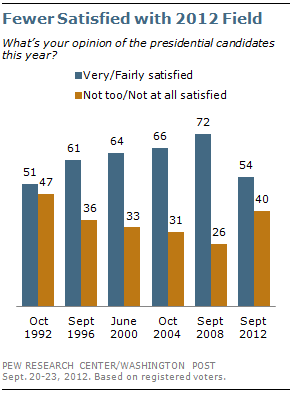 Approaching the first presidential debate, voters offer tepid ratings of the 2012 field. Just over half (54%) say they are either very or fairly satisfied with the presidential choices this year, while 40% say they are not too or not at all satisfied. The percentage expressing satisfaction with the candidates is now lower than it has been in any election since 1992.

The latest national survey by the Pew Research Center for the People & the Press and the Washington Post, conducted September 20-23, 2012 among 1,005 adults, including 838 registered voters, finds that satisfaction ratings of the candidates are unchanged from June when 56% said they were satisfied with the choices. In 2008, satisfaction with the presidential candidates rose from 60% in June to 72% in September.

Democratic voters continue to express more positive ratings of the candidates than Republicans. Overall, 66% of Democrats say they are 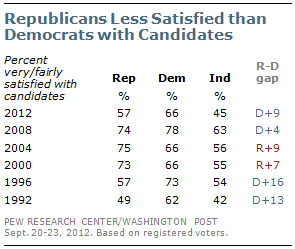 either very or fairly satisfied with the presidential field this year, compared with 57% of Republicans and fewer than half (45%) of independents.