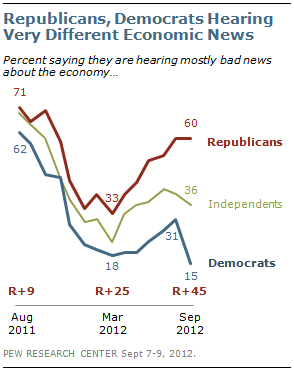 With the election less than two months away, partisan differences in views of economic news have become wider than ever. Despite this month’s lackluster jobs report, there has been a modest decline in the percentage of Americans saying news about the economy is mostly bad – with virtually all of the change coming among Democrats.

The latest national survey by the Pew Research Center for the People & the Press, conducted Sept. 7-9 among 1,012 adults, finds that views of economic news are more negative today than in March, when 24% said they were hearing mostly bad news. But they are far more positive than they were in August 2011, when 67% said economic news was mostly bad. 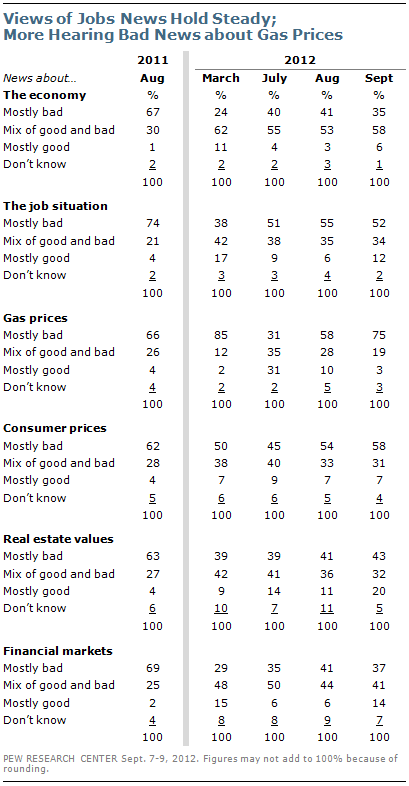 While news about gas prices is viewed more negatively, a majority of Americans (58%) also say they are hearing mostly bad news about prices for food and consumer goods. While that is little changed from August (54%), it is up 13 points since July.

The percentage hearing mostly good news about financial markets also has increased, from 6% last month to 14% currently. About four-in-ten (41%) say news about the markets been mixed, while 37% say it has been mostly bad.

Amid the nation’s financial crisis four years ago, there were virtually no differences in how Republicans, Democrats and independents viewed economic news. About eight-in-ten in each group said the news they were hearing was mostly bad. 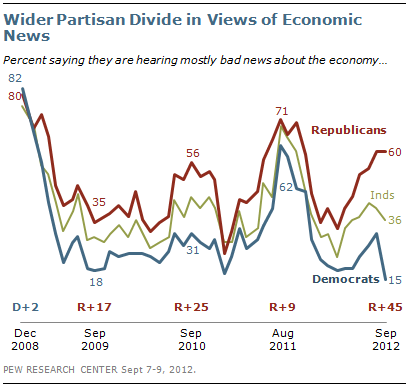 Differences in perceptions of economic news emerged after Barack Obama took office. But they never have been as great as they are today. Four times as many Republicans as Democrats say the news they have been hearing about the economy is mostly bad (60% vs. 15%).

As in recent months, the views of independents are roughly equidistant from those of Republicans and Democrats. In the current survey, 36% of independents say they hearing mostly bad economic news, little changed from a month ago (40%).

There also are substantial differences in how Republicans and Democrats view recent news about specific economic sectors. Half or more Republicans say the news about all the sectors 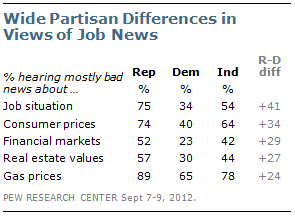 included in the survey has been mostly bad. For Democrats, news about only one sector – gas prices – stands out as particularly negative (65% mostly bad).

More than twice as many Republicans (75%) as Democrats (34%) say news about the job situation has been mostly bad. Democrats’ views of job news are less negative than last month, when 43% said the news was mostly bad. Opinions among Republicans (75% now mostly bad) and independents (now 54%) are largely unchanged over this period.