The falloff in credibility affects news organizations in most sectors: national newspapers, such as the New York Times and USA Today, all three cable news outlets, as well as the broadcast 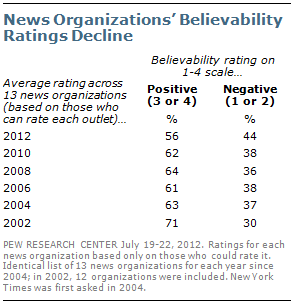 These are among the major findings of a survey by the Pew Research Center for the People & the Press, conducted July 19-22 among 1,001 adults. The survey asks people to rate individual news organizations on believability using a 4-point scale. A rating of 4 means someone believes “all or most” of what the news organization says; a rating of 1 means someone believes “almost nothing” of what they say. 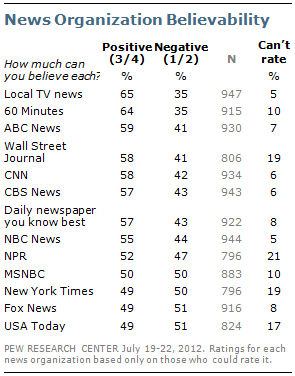 The Pew Research Center has asked about the believability of individual news organizations for more than two decades. During this period, the Center also has asked separately about the news media’s overall performance; ratings for the news media’s accuracy, fairness and other aspects of performance also have shown long-term declines. (For the most recent report, see “Press Widely Criticized, But Trusted More than Other Information Sources,” Sept. 22, 2011.)

The believability measures are based on those who give each news organization a rating. Roughly one-in-five are unable to rate the believability of NPR (21%), the New York Times (19%), the Wall Street Journal (19%) and USA Today (17%).

As in past believability surveys, local TV news and the CBS News program 60 Minutes receive the most positive ratings. Nearly two-thirds (65%) of those able to rate local TV news give it a rating of 3 or 4. Ratings are comparable for 60 Minutes (64% 3 or 4). 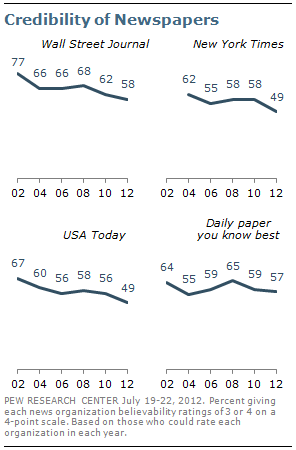 Positive believability ratings for the New York Times have fallen by nine points since 2010, from 58% to 49%. The decline has been comparable for USA Today. Two years ago, 56% rated USA Today’s believability at 3 or 4; today 49% do so. 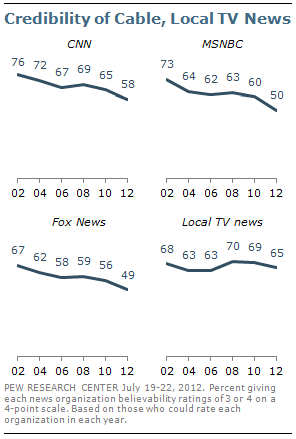 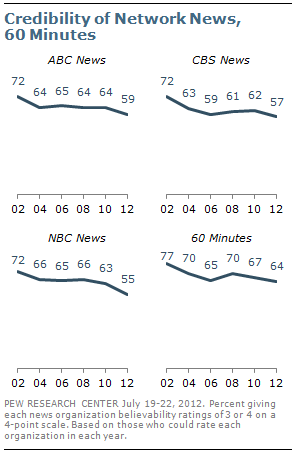 There also have been slight declines since 2010 in believability ratings for the three major TV networks — ABC News, CBS News and NBC News. Over the past decade, positive ratings for all three have fallen from the low 70s to the mid- to high-50s. More than six-in-ten (64%) give the CBS weekly newsmagazine 60 Minutes believability ratings of 3 or 4. That is down 13 points since 2002. 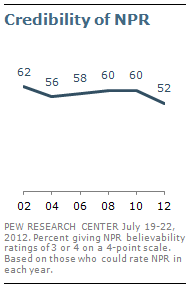 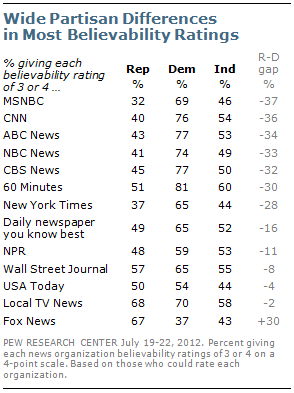 Partisan differences in believability ratings are more pronounced for broadcast and cable TV news organizations, with more modest gaps for most newspapers.

More than twice as many Democrats as Republicans rate MSNBC’s believability positively (69% vs. 32%). The differences are about as large in views of the believability of CNN and the three broadcast networks.

A majority of Democrats (59%) give NPR a believability rating of 3 or 4. That compares with 48% of Republicans. 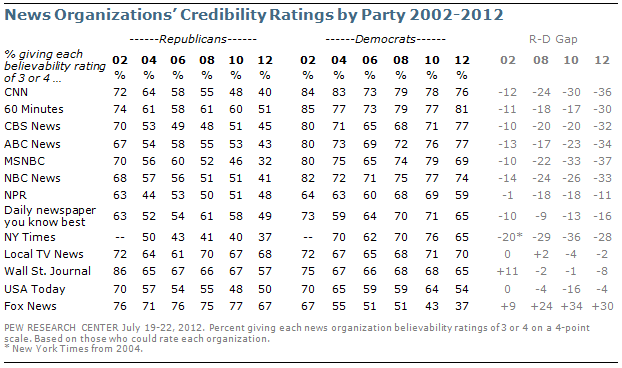 Next: About the Believability Survey Data
← Prev Page
You are reading page1Page2
Next Page →