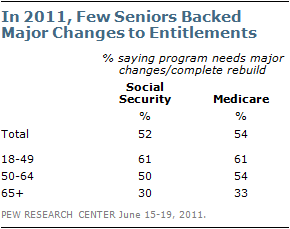 Older Americans are wary of changes to Medicare. Compared with younger people, they are more positive about the way the program operates, less apt to think that changes are needed and far less disposed towards Paul Ryan’s proposal to reshape Medicare. 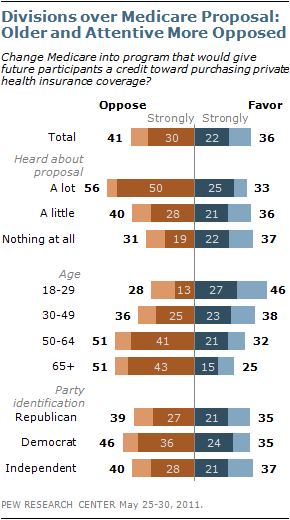 A Pew Research survey in May of 2011 found that those 65 and older had a negative reaction to Ryan’s plan to change Medicare: 51% opposed the plan (including 43% who opposed it strongly) compared with only 25% who favored the plan. People under the age of 50 offered far more support than those over 50 for Ryan’s Medicare plan.

A June 2011 survey found that most seniors said they were happy with how Medicare and Social Security operated. About six-in-ten (61%) said Medicare does an excellent or good job serving the people it covers; 57% said the same about Social Security. By contrast, most of those under 65 said these programs do an only fair or poor job.

Voters 65 and older are much more likely than younger voters to name Social Security as a top potential voting issue. A June 2012 survey found about as many senior voters saying Social Security is the issue that matters most to their vote (45%) as saying jobs (48%). 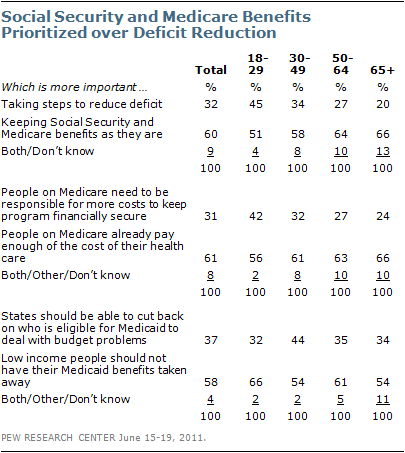 A wide majority of seniors (66%) said people on Medicare already pay enough of the cost of their health care, compared with 24% who said people on Medicare need to be responsible for more costs to keep the program financially secure. Most seniors (54%) also said low income people should not have their Medicaid benefits taken away, compared with 34% who said states should be able to cut back on who is eligible for Medicaid to deal with budget problems.

Divides in GOP Base over Entitlement Changes 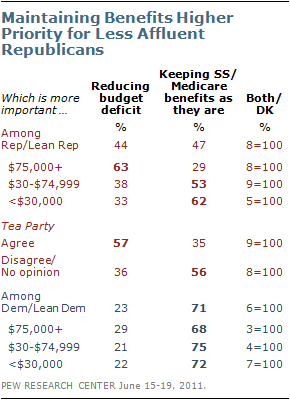 In addition to presenting challenges among seniors, the issue of entitlements divides the GOP base.

For more on entitlements see: “Public Wants Changes in Entitlements, Not Changes in Benefits,” released July 7, 2011 and section six of “The Generation Gap and the 2012 Election,” released November 3, 2011.

Divides in GOP Base over Entitlement Changes