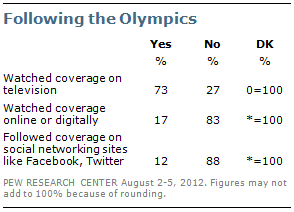 Large majorities of Americans are following coverage of the Olympic Games in London. Nearly eight-in-ten (78%) say they have watched or followed Olympic coverage either on television, online or on social networks.

The latest national survey by the Pew Research Center for the People & the Press and the Pew Internet & American Life Project, conducted August 2-5, 2012 among 1,005 adults, finds that NBC’s coverage of the Olympics receives high marks from the public. Overall, 76% of Olympic watchers describe the coverage as excellent (29%) or good (47%); 18% describe it as only fair (13%) or poor (5%). 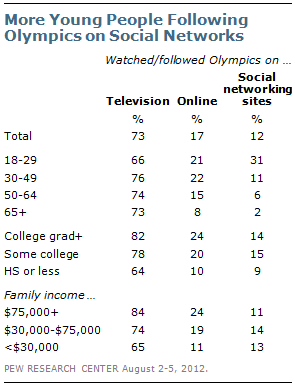 The poll finds that those following coverage online or on social networks are no more likely to say they are watching events live than those watching Olympic coverage on television.