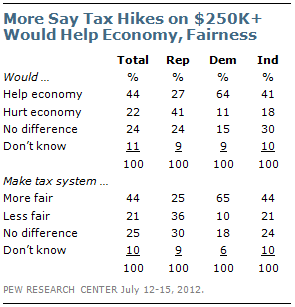 By two-to-one (44% to 22%), the public says that raising taxes on incomes above $250,00o would help the economy rather than hurt it, while 24% say this would not make a difference. Moreover, an identical percentage (44%) says a tax increase on higher incomes would make the tax system more fair, while just 21% say it would make the system less fair.

Most Democrats say raising taxes on incomes over $250,000 would help the economy (64%) and make the tax system more fair (65%). Republicans are more divided: 41% say this would hurt the economy, while 27% say it would help and 24% it would make no difference. And while 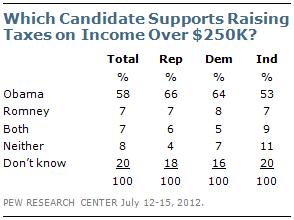 The latest national survey by the Pew Research Center for the People & the Press, conducted July 12-15 among 1,015 adults, finds that 58% identify Barack Obama as the presidential candidate who favors raising taxes to incomes above $250,000. Republicans (66%) and Democrats (64%) are more likely than independents (53%) to correctly associate Obama with this proposal.

The proportion that correctly identifies Obama as the candidate who supports higher taxes on incomes over $250,000 is on par with the percentage that knew the Supreme Court upheld most of the provisions of the 2010 Affordable Care Act. In late June, 55% said that the court had upheld most provisions of the law. (See “Division, Uncertainty over Court’s Health Care Ruling,” July 2, 2012.) 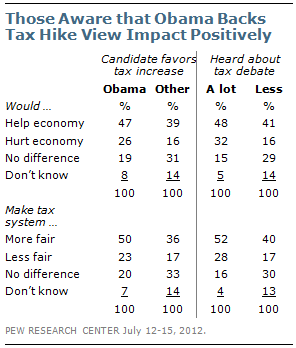 Raising Taxes on Rich Seen as Good for Economy, Fairness
Overview
About the Survey