Amid a tepid economic recovery, evaluations of national economic conditions remain broadly negative. And the percentage expecting conditions to improve over the next year has fallen, after reaching a recent high in March. 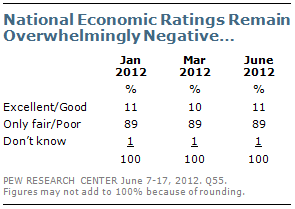 Meanwhile, opinions about the government’s economic policy priorities remain deadlocked: 48% place higher priority on spending to help the economy recover while a nearly identical percentage (47%) says the higher priority is reducing the budget deficit. These opinions have been virtually unchanged since early 2011.

As has been the case for more than four years, only about one-in-ten Americans (11%) rates current economic conditions as excellent or good. Nearly nine-in-ten (89%) say conditions are only fair (47%) or poor (42%). 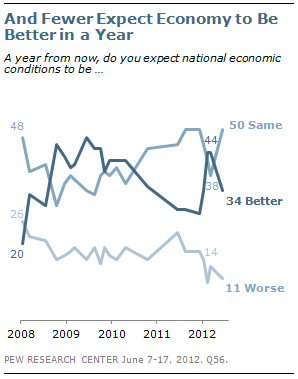 Just 34% now say the economy will be better a year from now, down from 44% in both March and February. Those were the highest measures of economic optimism in nearly two years.

The decline in economic optimism has been especially dramatic among Democrats. In March, 62% of Democrats said they expected the economy to improve in the next year, while only about half as many (29%) thought it would stay the same.

Optimism has fallen among both black and white Democrats (17 and 18 points, respectively) and by about the same proportion among liberal Democrats and conservative and moderate Democrats. 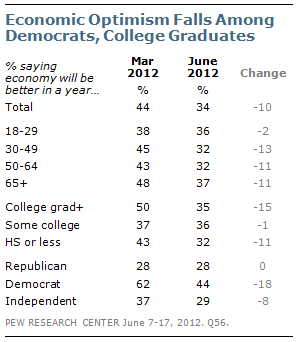 Independents’ views mirror those of Republicans: just 29% expect the economy to be better in a year, while 52% think it will be about the same and 15% say it will be worse. The percentage of independents expecting an improved economy is down from 37% in March.

There continues to be a huge partisan difference in views of whether the government should focus on spending to help the economy recover or reducing the budget deficit. These stark divisions are reflected in the views of voters who express certainty about their support for Obama or Romney. 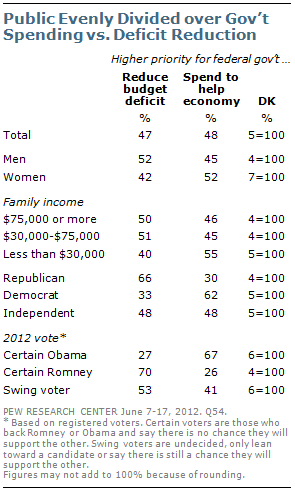 Swing voters are somewhat more likely to prioritize deficit reduction (53%) than spending to help the economy (41%).

Those in low-income families are more likely to prioritize spending to help the economy recover than are those in higher-earning families. Among those with family incomes of less than $30,000 a year, 55% place a higher priority on stimulus spending, 40% on deficit reduction. By contrast, half (50%) of those with family incomes of $75,000 or more prioritize reducing the budget deficit compared with 46% who favor spending more to help the economy recover. 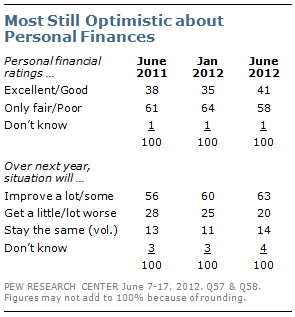 About four-in-ten (41%) say their own personal financial situation is either excellent or good; more (58%) say they are in only fair or poor shape financially. The percentage rating their finances as excellent or good is up modestly since January (35%).