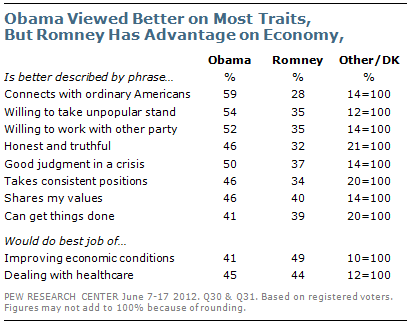 Obama holds a wide lead as the candidate more willing to take a stand, even if it’s unpopular (by 19 points), and who is more willing to work with leaders from the other party (17 points). More voters also say Obama is honest and truthful than say that about Romney (46% vs. 32%).

Obama’s lead is about as large (13 points) in views of which candidate would use good judgment in a crisis. And Obama holds a 12-point advantage as the candidate who takes consistent positions on the issues.

By a somewhat slimmer margin, more also point to Obama, rather than Romney, as the candidate who “shares my values” (46% vs. 40%). Voters are about evenly divided over which candidate can get things done (41% Obama, 39% Romney).

While Romney trails Obama on most personal traits, he has the advantage on the central issue on the minds of most voters – the economy. On the question of who can do the best job improving economic conditions, 49% say Romney, while 41% say Obama. When it comes to who can do the best job dealing with health care, voters are about evenly divided (45% Obama, 44% Romney).

Supporters’ Views of the Candidates

Romney’s deficit on many of these personal traits can partly be attributed to some skepticism among his own supporters. On each trait, large majorities of voters who support Obama say he is the stronger candidate. By comparison, Romney supporters are less likely to cite Romney as the better candidate across many of these traits. 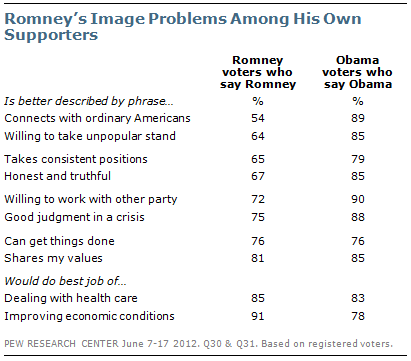 Most notably, when it comes to which candidate connects well with ordinary Americans, just 54% of Romney voters choose Romney, while 28% choose Obama.

And while 85% of Obama voters say Obama is more honest and truthful, 67% of Romney voters say that better describes Romney. Romney voters also are less likely to say their candidate is the one more willing to take an unpopular stand and to hold consistent positions on issues.

Obama’s significant advantage on connecting well with ordinary Americans is comparable to his advantage over John McCain on this dimension in 2008 (31 points now, 32 points then). On several other traits, however, Obama has a greater advantage now than he did four years ago. 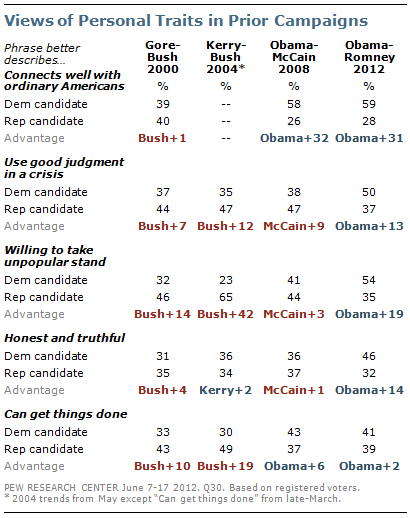 Obama currently holds a 13-point lead over Romney as the candidate who would use good judgment in a crisis. McCain led Obama on this leadership trait in June 2008 by nine points and George W. Bush held an advantage on good judgment in both 2000 and 2004.

Obama’s 46% to 32% advantage over Romney on honesty and truthfulness also contrasts with past elections. In previous elections since 2000, voters were closely divided in their assessments of whether the Democratic or the Republican candidate was honest and truthful.

Today, voters are about evenly split over whether Romney or Obama can best get things done; Bush led on this measure in both 2000 (by 10 points) and 2004 (19 points). Obama held a six-point lead over McCain on this trait in June 2008. 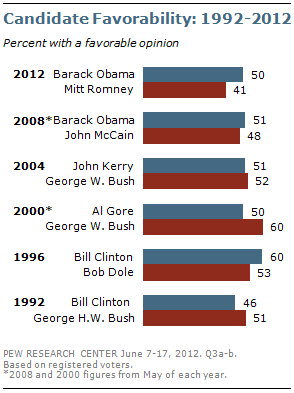 Voters are about evenly divided in their overall views of Obama: 50% rate him favorably, while 48% have an unfavorable view. And while opinions of Romney have improved in recent months, they remain more negative than positive (41% favorable, 47% unfavorable). 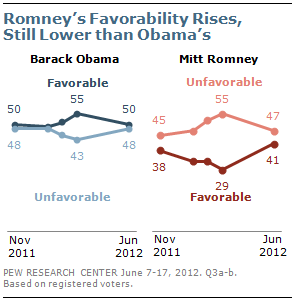 Nonetheless, Romney’s image has rebounded after declining during the contentious GOP primary campaign. Favorable opinions of Romney have increased from 29% to 41% since March, and are on par with the 38% who viewed him favorably in November 2011.

GOP Base Coming Around to Romney

Most of the improvement in Romney’s image has come among GOP voters. Currently, 71% of Republican and Republican-leaning registered voters view Romney favorably, up from 55% in March. 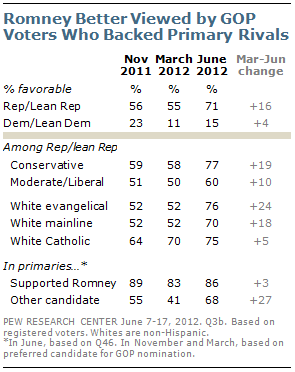 With the primaries now over, Romney is viewed much more favorably among Republican voters who supported other candidates for the nomination. In March, just 41% of Republican and Republican leaning voters who favored Santorum, Gingrich, or another candidate for the nomination offered a favorable assessment of Mitt Romney, while 46% had a negative impression. But today, 68% of these GOP voters view Romney favorably, and just 20% unfavorably.

Views of the Candidate’s Wives 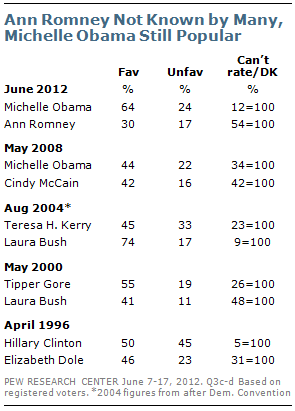 Michelle Obama remains popular, with 64% of voters viewing the first lady favorably and just 24% viewing her unfavorably. By comparison, Laura Bush was viewed more favorably (74%) during her husband’s run for reelection in August 2004, while Hillary Clinton was viewed less favorably (50%) in April 1996.

More voters have a favorable (30%) than an unfavorable (17%) impression of Ann Romney. But she remains unknown to about half of all registered voters (54%). So far, she is less visible than other recent candidate spouses. 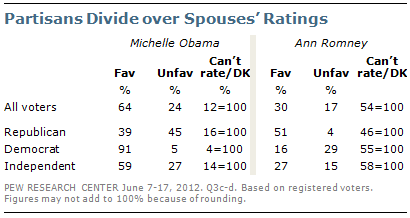 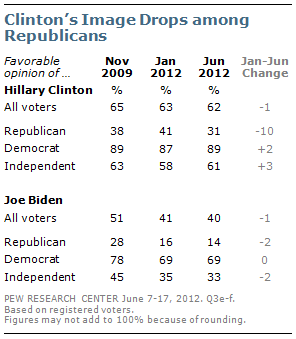 Hillary Clinton continues to be viewed positively by voters: 62% have a favorable impression of Clinton, while 32% have an unfavorable impression. While her overall rating is little changed in recent months, Republican views have grown somewhat more negative. Currently 65% of Republican voters view Hillary Clinton unfavorably, up from 52% in January. Opinions among independents and Democrats are little changed over this period.

Voters’ views of Joe Biden remain mixed: About as many voters view the vice president favorably as unfavorably (40% vs. 42%). This is little changed since January.

Next: Section 4: Views of the National Economy
← Prev Page
Page1Page2Page3You are reading page4Page5Page6
Next Page →