Voter engagement in this year’s presidential election is lower than in 2008, but on par with, or higher than, levels at a similar point in the previous four election cycles. Two-thirds (67%) of registered voters say they are giving quite a lot of thought to the election. This is down somewhat from 2008 (72%), but is still higher than in campaigns from 1992 to 2004. 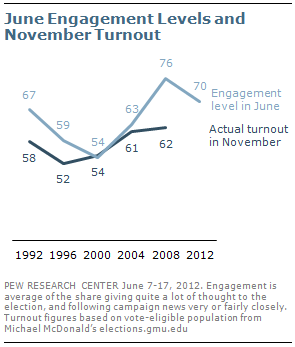 Voter engagement levels in June provide a rough gauge of turnout levels on Election Day. In both 1996 and 2000, early June measures showed a distinct lack of public interest and engagement, and they ended up being two of the lowest turnout elections in recent history. By comparison, engagement levels were higher early in the 1992, 2004 and 2008 election cycles, when turnout was relatively high.

At this point, voter engagement falls somewhere between the past two election cycles. Voters are somewhat less engaged than in June 2008, but somewhat more than in 2004. 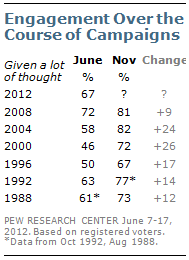 The trajectory of voter engagement was different in the 2008 campaign than it was in 2004 and most earlier elections. Four years ago, there was a great deal of interest early in the campaign, but it increased only modestly as Election Day neared. In prior elections, by contrast, voter engagement was at a lower level in June surveys, but increased substantially toward the end of the campaign.

Democratic Engagement Down from 2008

Across most measures, Democratic engagement levels are down substantially from four years ago, while Republican rates are steady or up. And Romney voters are more interested than Obama voters in this year’s election.

Romney and Obama voters are about equally likely to say they are more interested in politics this year than they were four years ago (51% Romney voters vs. 46% Obama voters). In 2008, 74% of Obama voters expressed heightened interest in politics compared with 53% of McCain voters. 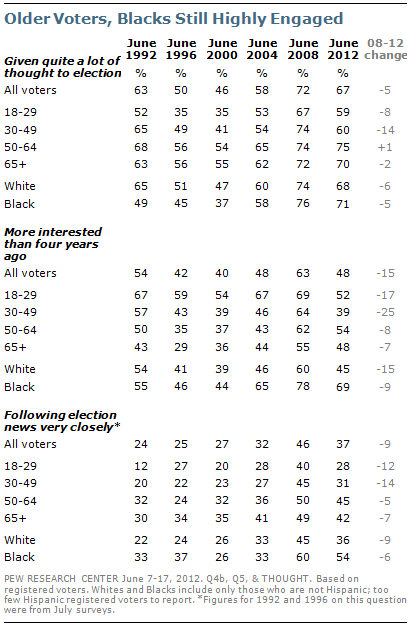 The pattern is similar in attentiveness to campaign news. Less than a third of voters under age 50 are following news about the presidential candidates very closely, down from 2008 and far lower than attentiveness among voters 50 and older. 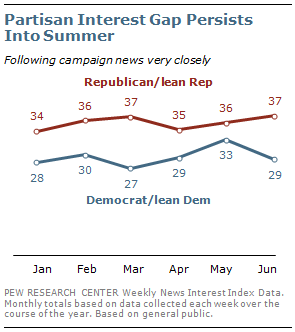 Partisan differences in campaign interest this year may reflect the fact, unlike in 2008, only the Republicans have had a highly competitive primary. Even with the primaries concluded, however, there are no signs that the partisan gap in engagement is narrowing.

The Pew Research Center’s weekly News Interest Index survey has tracked public attention weekly over the course of the year, and Republicans have consistently been following campaign news more closely throughout.

In polls conducted during the first half of June, 37% of Republicans and Republican leaners say they tracked campaign news very closely compared with 29% of Democrats and Democratic leaners. The differences in campaign news interest are comparable to earlier this year, during the GOP primaries and caucuses. By contrast, throughout the 2008 election Democrats were tracking campaign news substantially more closely than Republicans. 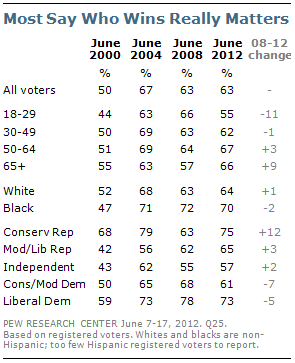 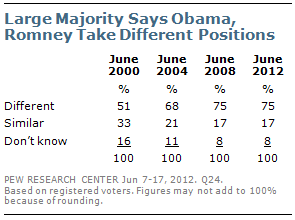 Satisfaction with the Candidates 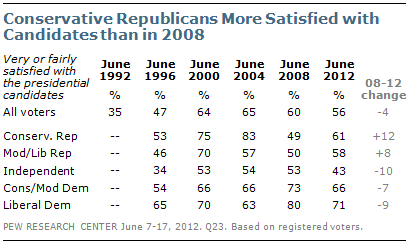 Despite these shifts, liberal Democrats remain more satisfied with the candidates than conservative Republicans by a 71% to 61% margin. This is down from an 80%-to-49% margin four years ago. In 2004, when George W. Bush was the incumbent presidential candidate, conservative Republicans expressed more satisfaction with the presidential candidates than did liberal Democrats (83% vs. 63%). 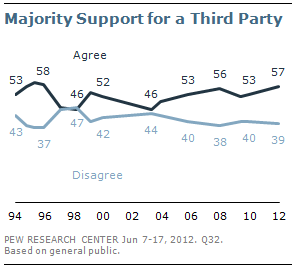 A majority of Americans (57%) agree that there should be a third major political party in addition to the Democrats and Republicans. This is on par with levels of support for a third party in 2008 and 1996, but higher than in 2000 and 2004. 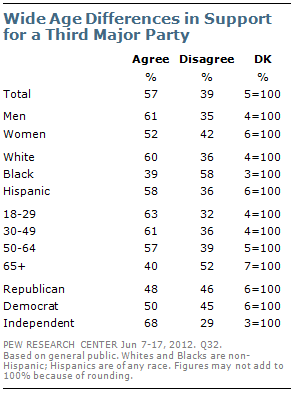 As in the past, independents (68%) are far more likely than Republicans (48%) and Democrats (50%) to agree that there should be a third major political party.