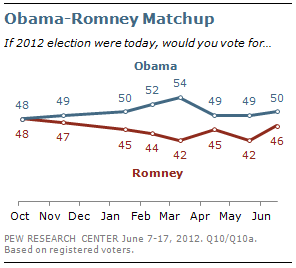 All indications suggest that the 2012 vote will be a very close one. Barack Obama has never trailed Romney in head-to-head matchups 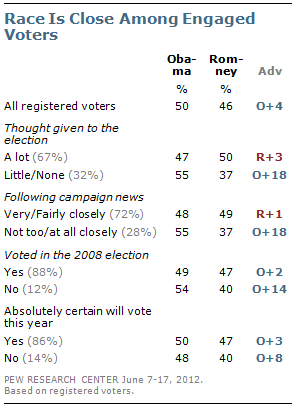 with Romney over the past nine months. Obama currently holds a four-point advantage (50% to 46%) among all registered voters, which is not statistically significant. And if the higher engagement and interest among Republicans persists through the fall, that alone could reduce any advantage Obama has enjoyed.

Obama Is the Focal Point

As is typical when incumbents are running for reelection, Barack Obama looms large in the choices of both Democratic- and Republican-oriented voters. Obama’s supporters back him strongly – as strongly as they did in 2008 – and say their vote is an expression of support for the president. And while there is a distinct lack of enthusiasm for Mitt Romney among many who intend to vote for him, their deep dislike of Obama shores up their support for Romney. 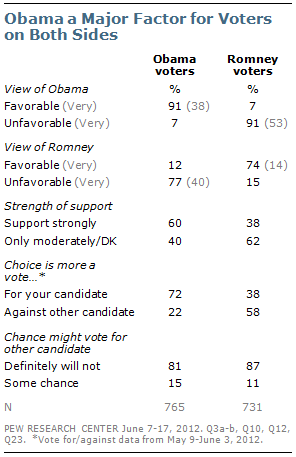 Romney voters’ intensely negative views of Obama are not matched by equally intense positive views of their own candidate. Although about three-quarters (74%) of those who intend to vote for Romney say they have a favorable impression of him, just 14% say that impression is very favorable.

Because of these differing views of the candidates, Democrats are clearly more enthusiastic about voting for Obama than Republicans are about voting for Romney: 60% of Obama’s supporters back him strongly; by comparison, just 38% of Romney voters support him strongly. An earlier Pew Research Center survey, conducted May 9-June 3, found 72% of Obama’s supporters saying their choice was more of a vote for Obama than against Romney. By contrast, most Romney voters (58%) described their vote as a vote against Obama rather than for Romney (38%).

While less enthusiastic, Republican voters are no less committed to seeing Romney win. Fully 87% of Romney voters say there is no chance they will change their mind, as do 81% of Obama supporters. Romney voters also are more likely to say it “really matters who wins” this election (69% vs. 63%). And as discussed in Section 1, Romney voters exceed Obama voters on key measures of engagement.

To some extent, the lack of enthusiasm many Romney voters feel for their candidate parallels how Republicans felt four years ago. In June of 2008, just 34% of McCain voters said they backed him strongly, as do 38% of Romney voters today. McCain’s support grew stronger over the course of the general election campaign, but the gap between the strength of Obama’s support and McCain’s support did not narrow.

Counterbalancing this is the near-uniform dislike of Barack Obama among Romney supporters. While 77% of Bush voters viewed John

In both 2004 and 2008, Republican voters said they were mostly voting for Bush and McCain. But this year the Romney vote is primarily a vote against Barack Obama. This mirrors the feelings of Kerry supporters early in the 2004 campaign, when most described their choice mainly as a vote against George W. Bush.

As a result, despite their lack of enthusiasm, Romney voters are as committed to their candidate as Bush voters were in 2004. Nearly seven-in-ten (69%) say it really matters who wins, compared with 59% of McCain supporters four years ago. This is comparable to the view of Bush’s voters in 2004. And just 11% of Romney’s supporters say there is a chance they would consider voting for Obama. That figure was about twice as high four years ago, when 25% of McCain voters said there was a chance they would back Obama.

Obama Supporters Now and Then

In most respects, Barack Obama’s supporters are just as enthusiastic about him today as they were in 2008. Six-in-ten say they support him strongly, compared with 58% in June 2008, and 91% view him favorably, compared with 88% then. But there has been some decline in strong sentiment – the share with a very favorable assessment of Obama is now 38% compared with 46% four years ago.

Democratic voters also are less satisfied with the presidential candidates than they were in 2008 (80% then vs. 64% today). And while 70% of Democratic voters said it really mattered who won the election four years ago, fewer Democrats (63%)say that today. 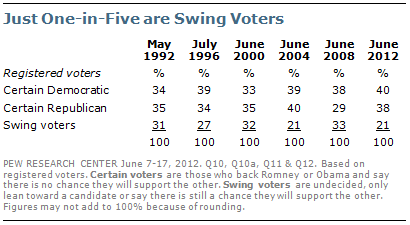 Levels of engagement and enthusiasm in the political bases are particularly important factors in 2012 given how few voters are open to persuasion. Nearly eight-in-ten registered voters say they have made up their minds about who to vote for this year with “no chance” that they will change. Just 21% say they are undecided about their vote choice or that they may change their mind before Election Day. 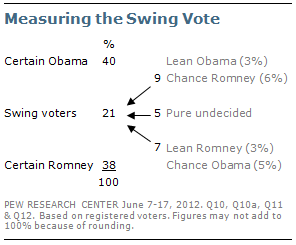 The relatively small size of the “swing” vote is typical of elections that involve incumbent presidents; in June of 2004, 21% of voters were also swing voters. By comparison, in both 2000 and 2008, about a third of voters were identified as swing voters.

Economic conditions are at the forefront of most voters’ concerns. When asked to name the issue they would most like to hear the candidates talk about, 56% mention one of three economic topics: the economy broadly (42%), the job situation (13%) or the budget deficit (4%). Health care is the only other issue garnering more than one-in-ten mentions (18%). 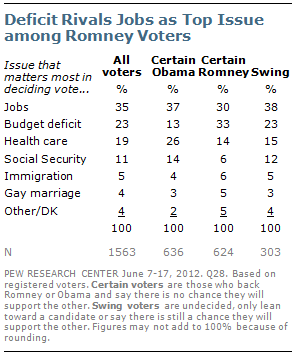 A separate close-ended question echoes these economic concerns. When offered six choices, a plurality of voters (35%) say that jobs will be the top issue in deciding their vote for president this year, followed by the budget deficit (23%) and health care (19%). Another 11% say Social Security will matter most to them, with relatively few citing immigration (5%) or gay marriage (4%) as the most important issue affecting their vote. 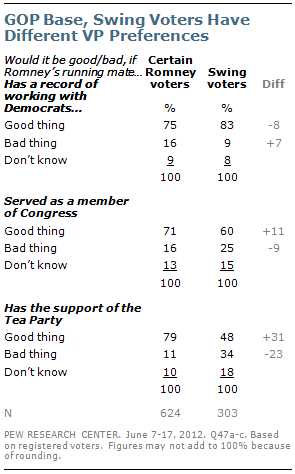 When thinking about the qualities of a Romney vice presidential running mate, fully 83% of swing voters say that it would be a good thing if Romney were to pick someone who has a record of working with Democrats. A slightly lower percentage of certain Romney supporters (75%) say the same.

Experience in Congress is a bit more appealing to Romney’s base (71% of certain Romney voters say this would be a good thing) than to swing voters (60%).