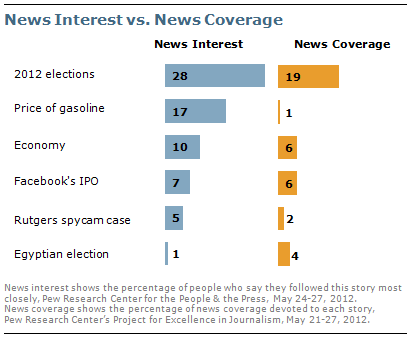 News about the presidential election topped coverage, accounting for 19% of the newshole, according to a separate analysis by the Pew Research Center’s Project for Excellence in Journalism (PEJ). News about gas prices made up just 1% of coverage, while news about the economy overall accounted for 6%.

Federal estimates show that gas prices have dropped since late April in most regions of the country and Americans appear to have taken notice. More say the price has gone down than up over the past month (51% vs. 39%). That is not the case on the West Coast, where prices have increased – and most residents know that is the case. (See: Public Sees Gas Prices Down a Little Across Much of Nation.)

News about gas prices consistently gets the public’s attention. In mid-March, 52% said they were very closely following news about the rising price of gas and oil.

Just 5% say their top story the sentencing of a Rutgers University student who had used a webcam to spy on his gay roommate; 11% say they very closely followed news about the sentencing of Dharun Ravi. This story made up 2% of coverage. 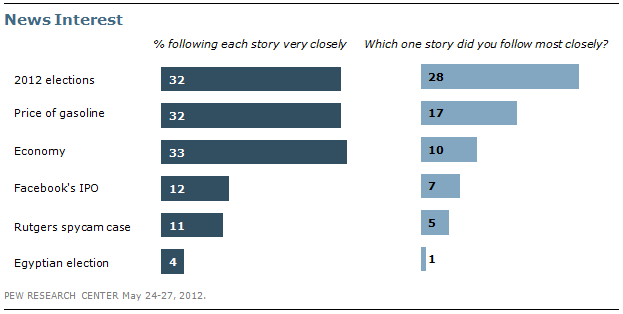 The presidential election in Egypt drew little interest, with 4% saying they followed this news very closely and 1% saying this was their top story. News about the election made up 4% of coverage. In early 2011, the public followed the initial protests against the Egyptian government and the resignation of Hosni Mubarak much more closely. In mid-February of last year, 39% said they were following this news very closely.

These findings are based on the most recent installment of the weekly News Interest Index, an ongoing project of the Pew Research Center for the People & the Press. The index, building on the Center’s longstanding research into public attentiveness to major news stories, examines news interest as it relates to the news media’s coverage. The weekly survey is conducted in conjunction with The Project for Excellence in Journalism’s News Coverage Index, which monitors the news reported by major newspaper, television, radio and online news outlets on an ongoing basis. In the most recent week, data relating to news coverage were collected May 21-27, and survey data measuring public interest in the top news stories of the week were collected May 24-27 from a nationally representative sample of 1,012 adults.