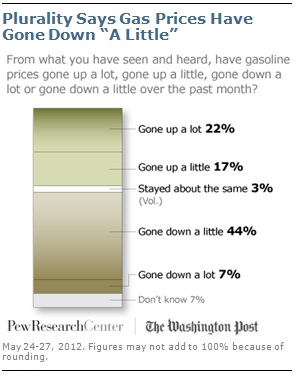 About half of Americans say the price of gasoline has gone down over the past month. But West Coast residents are much more likely to see gasoline prices going up, which is consistent with a rise in prices at the pump in that part of the country. 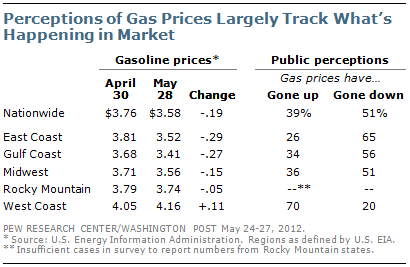 Experiences differ significantly by region. Seven-in-ten (70%) of those in West Coast states say the cost of gasoline has gone up at least a little over the past month; 42% say it has gone up a lot. By contrast, nearly two-thirds (65%) along the East Coast say the cost has gone down and most (58% of those in the region) say it has gone down a little. In both cases, the prevailing perceptions match what is happening in the market.

According to numbers released by the U.S. Energy Information Administration, prices did decline over the past month in most regions of the country – while they rose in the west. Nationwide, the price of a gallon of regular gasoline has dropped 19 cents from an average of $3.76 the week of April 30 to an average of $3.58 this week. In the West Coast states, the average cost increased from $4.05 a gallon in late April to $4.16 in the last week of May. On the other hand, the average price on the East Coast dropped from $3.81 to $3.52 – 29 cents – during the same time period.

Across the country, lower income Americans are less likely to say that gasoline prices are falling. A clear majority of those earning $75,000 or more say prices have gone down (56%), while 37% say they have gone up. In households earning less than $30,000, about as many say the price has gone up (47%), as say it has done down (41%).