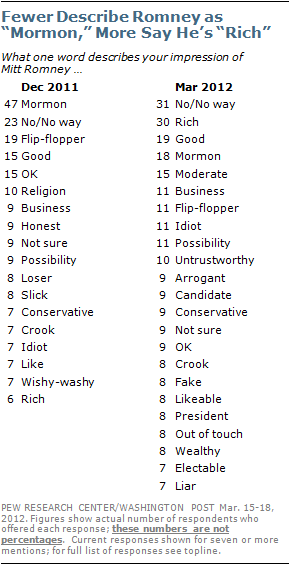 When Americans are asked what one word comes to mind when thinking about Mitt Romney, no single term stands out. The most frequent responses are “no” or “no way,” and “rich.”

That represents a shift from October and December 2011. In both of those surveys, far more mentioned the Republican presidential candidate’s Mormon faith than anything else.

The latest national survey by the Pew Research Center for the People & the Press and The Washington Post, conducted March 15-18 among 1,009 adults, finds that more people offer negative than positive assessments of Romney. This also is the case for Romney’s rivals for the GOP nomination– Rick Santorum, Newt Gingrich and Ron Paul.

As was the case in December, roughly twice as many give negative one-word descriptions of Romney than positive terms (30% vs. 14%); 29% offer neutral terms.

The most frequently used negative words to describe Romney, aside from “no,” are “flip-flopper,” “idiot” and “arrogant.” Positive descriptors include “good,” “president” and “electable.”

While no single term stands out among impressions of Romney, people use the terms “conservative” or “very conservative” most often to describe Rick Santorum. “No” and other words used to connote opposition to his candidacy are a distant second. Far more respondents use the word “conservative” to describe Santorum than say that about Romney.

The most frequently used negative terms for Santorum, with the exception of “no,” are “crazy,” “too conservative,” “extreme” and “idiot.” Top positive words are “good” and “honest.” Santorum’s religious beliefs are a major theme in the responses – positive, negative and neutral – with respondents mentioning “religion,” “Christian,” and “overly religious” to describe him. 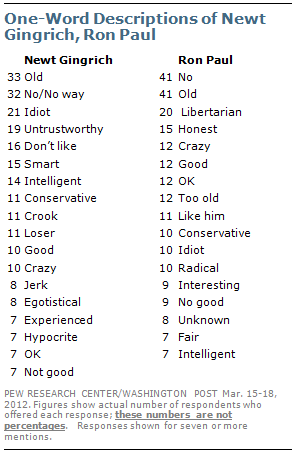 For the other GOP candidates, Gingrich and Paul, age is a recurring theme. Among the words most frequently offered about Newt Gingrich are “old” and “no.” Other words include “idiot,” people saying they do not like him and references to his intelligence.

The most frequently offered words about Ron Paul are “no” or references to his age such as “old.” About half as many offer the word “libertarian.” Following that are “honest,” “crazy,” “good,” “OK” and “too old.” 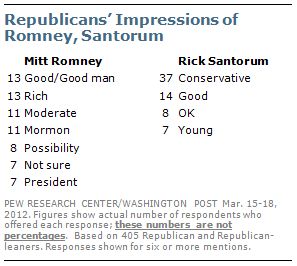 The word most frequently used by Republicans and GOP leaners to describe Santorum is “conservative.” Other words used are “good,” “OK” and “young.” 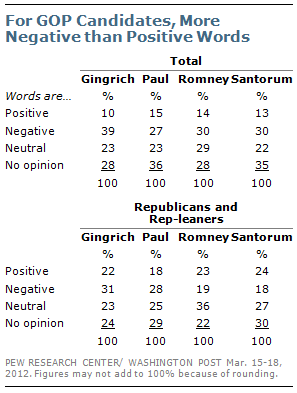 Among the public, far more people use negative words than positive ones to describe their impressions of all four GOP candidates. For Romney, 14% offer positive words, while 30% offer negative words and 29% use neutral terms; 28% offer no opinion, down from 43% in December.

Similarly, 13% use positive words for Santorum, 30% use negative words and 22% neutral terms.

For Gingrich, about three times as many offer negative than positive words (39% vs. 10%); 23% use neutral words when asked about their impression of the former House speaker.

Among Republicans and GOP leaners, about the same percentages use negative words as positive words to describe Romney (23% and 19%, respectively). Similarly, about as many use positive as negative terms for Santorum (24% positive vs. 18% negative).