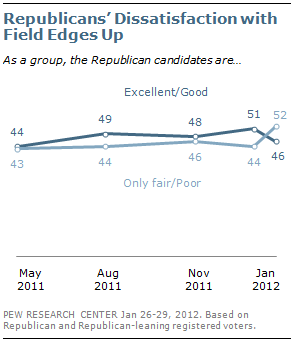 By comparison, just 46% of Republican voters have positive opinions of the GOP field, according to the latest survey by the Pew Research Center for the People & the Press, conducted Jan. 26-29 among 1,006 adults, including 341 Republican and Republican-leaning registered voters. In early January, shortly before the New Hampshire primary, 51% gave the field excellent or good ratings while 44% rated the candidates collectively as only fair or poor.

That survey showed that GOP voters’ ratings of the field are far less positive than were opinions of the Republican field in 2008. At about this point four years ago, 68% of Republican and GOP-leaning voters rated the field as excellent or good. (See “GOP Voters Still Unenthused about Presidential Field,” Jan. 9, 2012.)

Who Understands Problems of Average Americans? 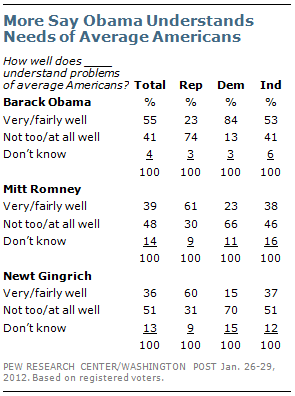 Separately, the survey, in partnership with The Washington Post, finds that far more voters say Barack Obama understand the problems of average Americans than say that about either Mitt Romney or Newt Gingrich. More than half of all registered voters (55%) say Obama understands the problems of average Americans very or fairly well. About four-in-ten (41%) say he understands people’s problems not too well or not at all well.

Only about four-in-ten voters (39%) give Romney high marks for understanding the problems of average Americans; about the same percentage (36%) says Gingrich does very or fairly well in understanding people’s problems.

About half of independent voters (53%) rate Obama positively in understanding the problems of average Americans; only 38% and 37% of independents, respectively, give Romney and Gingrich positive ratings. Democratic voters overwhelmingly say that Obama understands the problems of average people (84%). Smaller majorities of GOP voters give Romney (61%) and Gingrich (60%) positive ratings.