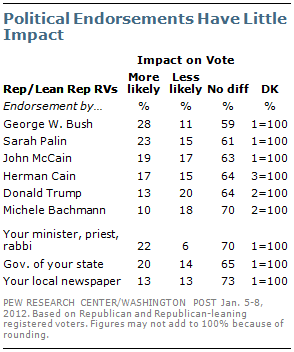 Most Republican and Republican-leaning voters say that candidate endorsements by leading GOP figures, including George W. Bush, Sarah Palin and John McCain, would make no difference in their vote, according to a survey conducted Jan. 5-8 among 1,000 adults by the Pew Research Center for the People & the Press and The Washington Post. The same is true for endorsements by the governor of their state, their local newspaper, and their minister priest or rabbi.

Yet among all voters, endorsements by Bush and Palin – as well as other prominent Republicans – would be seen more negatively than positively. Roughly a quarter (26%) of all registered voters say they would be less likely to vote for a candidate supported by Bush, 14% say they would be more likely and 58% say it would make no difference. While 28% of all voters would view a Palin endorsement negatively, only 11% would view it positively and 60% say it would not matter.

McCain endorsed Mitt Romney in New Hampshire on Jan. 4, before that state’s primary. Among GOP voters nationally, McCain’s endorsement is a wash – about as many say they would be more likely (19%) as less likely (17%) to vote for a candidate supported by McCain; 63% say McCain’s endorsement would make no difference. Among all voters, the balance of opinion regarding a McCain endorsement is negative: 23% say they would be less likely to vote for a candidate McCain supported, 13% less likely, and 63% say it would make no difference. An endorsement by Donald Trump would draw a mixed reaction among Republican and Republican-leaning voters: 20% say they would be less likely to support a candidate backed by Trump, 13% more likely and 64% say it would make no difference.

Among all voters, however, more than three times as many would view a Trump endorsement negatively than positively (28% vs. 8%). That is little changed from 2007.

Cain’s endorsement, like Trump’s, would get a mixed reaction among Republicans (17% more likely, 15% less likely). Among all voters, 21% would view Cain’s support for a candidate negatively while just 8% would view it positively.

In views of other endorsements, as many voters say they would be more likely as less likely to vote for a candidate supported by their state’s governor (16% each); that also is the case for an endorsement by their local newspaper (13% more, 12% less).

However, about twice as many say they would be more likely than less likely to vote for a candidate supported by their minister, priest or rabbi (19% vs. 9%). Among Republican and Republican-leaning voters, 22% view such an endorsement positively while just 6% view it negatively. Yet among Republican voters, as well as among all voters, most say that support for a candidate by their minister would have no effect on their vote (70% of Republican and Republican-leaning voters, 69% of all voters).

The analysis in this report is based on telephone interviews conducted January 5-8, 2012 among a national sample of 1,000 adults 18 years of age or older living in the continental United States (600 respondents were interviewed on a landline telephone, and 400 were interviewed on a cell phone, including 184 who had no landline telephone). The survey was conducted by interviewers at Princeton Data Source under the direction of Princeton Survey Research Associates International. A combination of landline and cell phone random digit dial samples were used; both samples were provided by Survey Sampling International. Interviews were conducted in English. Respondents in the landline sample were selected by randomly asking for the youngest adult male or female who is now at home. Interviews in the cell sample were conducted with the person who answered the phone, if that person was an adult 18 years of age or older. For detailed information about our survey methodology, see: https://www.pewresearch.org/politics/methodology/. 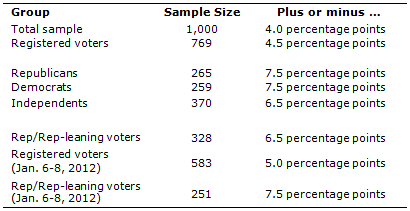 About the SurveyTrump, Bachmann, Cain