About a quarter of the public (27%) says they have watched one or more of the Republican presidential debates so far this year. Most debate watchers say the televised sessions have been helpful in learning about the candidates (61%) and a third (34%) say the debates have led them to change their minds about which candidate they might support. 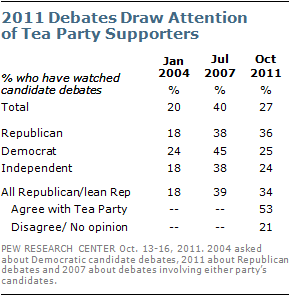 Four years ago, in July 2007, 40% said they had watched any presidential debate – whether Democratic or Republican – at that early point in the campaign. In that cycle both parties had wide open races and a number of debates took place early on. Looking back to 2004, when only the Democrats had a primary contest, only 20% said they had watched any of the Democratic debates as of January 2004.

According to the latest survey by the Pew Research Center for the People & the Press, conducted Oct. 13-16 among 1,007 adults, about a third (36%) of Republicans say they have watched a debate this year, which is comparable to the number that said this in July 2007 (38%). Interest among Democrats and independents is understandably much lower, with only a quarter of Democrats (25%) and independents (24%) reporting that they have watched any of the debates. This compares to significantly broader viewership in 2007 (45% of Democrats and 38% of independents) in July 2007, when there were contested primaries in both parties.

About six-in-ten debate watchers (61%) say the televised events have been helpful in learning about the candidates, not much different from the 66% of debate watchers who said this four years ago. 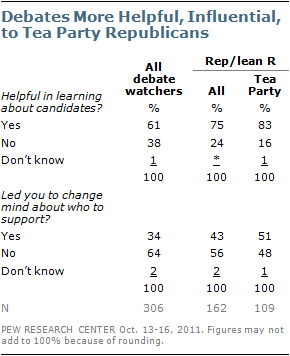 Three quarters of Republicans and Republican-leaning viewers say they have found the debates to be helpful in learning about the candidates (75%). Among those who say they agree with the Tea Party, 83% say the debates have been helpful.

A Third in GOP Have Seen a Presidential Debate
OverviewDebates Helpful, Somewhat Influential
About the Survey