As views of national conditions worsen, Barack Obama’s job ratings remain mixed: 48% disapprove of the way Obama is handling his job as president, while 44% approve. This is little changed from June (46% approve, 45% disapprove). In early May, immediately following the announcement of Osama bin Laden’s death, 56% approved of Obama’s job performance. 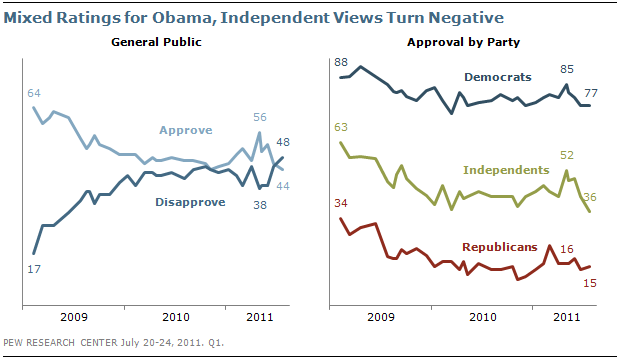 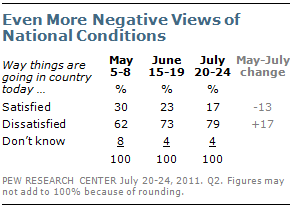 National satisfaction has also declined in recent months. In the current survey, just 17% say they are satisfied with the way things are going in this country today while 79% say they are dissatisfied. In May, somewhat more (30%) said they were satisfied with national conditions. That figure fell seven points to 23% in June and has fallen another six points in July. The current ratings are now at the lowest point since the financial crisis of 2008. In October of that year, just 11% expressed a positive view of national conditions. 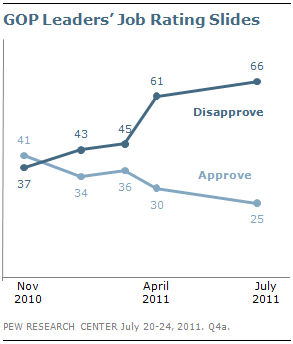 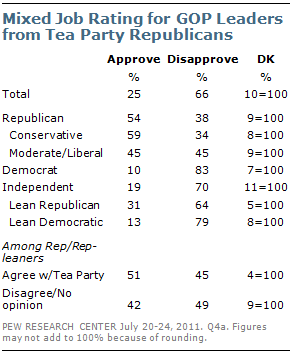 Democrats give Republican leaders overwhelmingly negative job ratings (83% disapprove), as do independents (70% disapprove). A narrow majority of Republicans approve of the way GOP leaders are doing their job (54%), but nearly four-in-ten (38%) disapprove.

Job ratings for Democratic leaders in Congress are not much better than those of GOP leaders. Just 30% of the public approves of their job performance while twice as many (60%) disapprove. Ratings for Democratic Congressional leaders have shown little change in recent months. Nonetheless, approval ratings for the Democratic Party’s leadership remain near all-time lows. 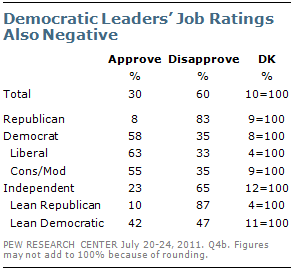 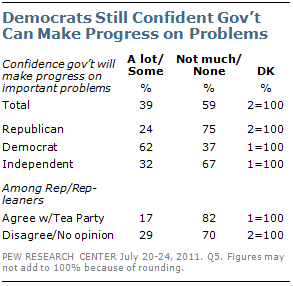 Democrats stand out for being far more optimistic than other groups about the government’s ability to address important problems over the next year. Fully 62% have at least some confidence in the government’s ability to address major problems over the next year while just 37% say they have not much or no confidence at all. By comparison, just 32% of independents and 24% of Republicans are confident the government in Washington will make progress on important issues. Among Republican and Republican-leaning independents, optimism is somewhat higher among those who do not agree with the Tea Party (29%) than it is among those who agree with the movement (17%).

Parties at Parity on Most Issues 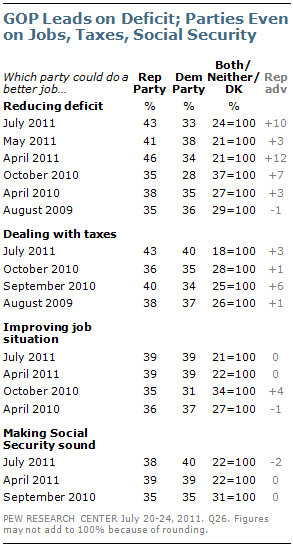 The public’s views about which party can better handle several major issues have changed little since April. The GOP currently holds a 10-point advantage as the party better able to reduce the federal budget deficit (43% to 33%). The Republican advantage had been 12 points in April, but had narrowed to three points in May.

On three other issues – improving the job situation, making the Social Security system financially sound and dealing with taxes – neither party holds a significant advantage.

As in April, independents are much more likely to say Republicans could do a better job than Democrats at reducing the deficit (by 45% to 27%). The GOP also holds a 12-point lead among independents as the party better able to improve the job situation (42% to 30%).This represents a change from April, when independents were divided over which party could better improve the job situation (38% Republican Party, 35% Democratic Party). Independents are split over which party can do a better job of making the Social Security system financially sound and dealing with taxes.

Democrats Seen as More Willing to Work with Opponents

Democrats continue to hold substantial leads over Republicans on several traits, including willingness to cooperate with opponents, empathy and honest governance. And far more people view the GOP as more extreme in its positions than say that about the Democratic Party.

About twice as many say the Democrats are more willing to work with political leaders from the other party than say that about the GOP (51% to 26%). In April, the Democrats held a 17-point lead on this trait (49% to 32%).

The Democrats also continue to hold double-digit leads on concern for “people like me” (21 points) and governing in a more honest and ethical way (12 points). 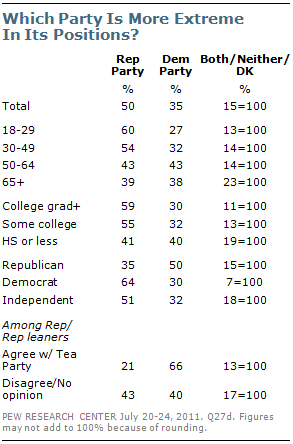 When asked which political party is more extreme in its positions, 50% say the Republican Party while 35% say the Democratic Party. While there are wide partisan differences in these opinions there also are age and educational differences.

This question divides Republicans and Republican-leaning independents who support the Tea Party from those who disagree or have no opinion of the movement. Nearly two-thirds (66%) of Republican Tea Party supporters say the Democratic Party is more extreme in its positions, while just 21% say that about the GOP. Those who disagree with the Tea Party or have no opinion about it are about evenly divided: 43% say the Republican Party is more extreme, while 40% name the Democratic Party.

Next: Section 2: The Debt and Deficit Debate
← Prev Page
Page1You are reading page2Page3Page4
Next Page →

Public Wants a Debt Ceiling Compromise, Expects a Deal Before Deadline
Section 1: Views of Obama, Congress and the Political Parties
Poor Ratings for Congressional LeadersWide Partisan Divide in Confidence in GovernmentParties at Parity on Most IssuesDemocrats Seen as More Willing to Work with OpponentsYoung, Well Educated See GOP as More Extreme
Section 2: The Debt and Deficit Debate About the Survey