A week ahead of the Aug. 2 debt-ceiling deadline, the public overwhelmingly wants political leaders in Washington to compromise on the issue. About two-thirds (68%) say that lawmakers who share their views should be willing to compromise, even if it means striking a deal they disagree with. Only 23% say lawmakers who share their views should stand by their 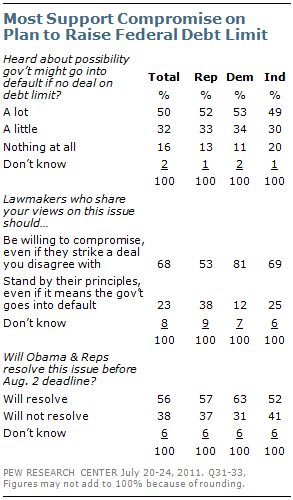 principles, even if that leads to a government default.

And even though negotiations about raising the debt limit have continued to stall, a majority (56%) thinks that Barack Obama and congressional Republicans will reach a deal before Aug. 2, while 38% think the issue will not be resolved in time. This is little changed from a Washington Post/ABC News survey conducted a week ago, in which 54% expected a deal and 43% did not.

Half of Americans (50%) say they have heard a lot about the Aug. 2 debt limit deadline, and attention levels are similar across party lines. But there are sizable partisan and ideological divisions when it comes to how lawmakers should approach the final deliberations. Fully 81% of Democrats say the lawmakers they agree with should compromise in the debt ceiling debate, even if it means an imperfect outcome. Roughly two-thirds (69%) of independents say the same. About half (53%) of Republicans want to see their leaders show a willingness to compromise, while 38% say the leaders they agree with should stand by their principles, even if it means a government default.

Nearly half of conservative Republicans (47%) say lawmakers who share their views should stick to principles despite the threat of a default; only 21% of moderate and liberal Republicans agree. There is no comparable ideological divide among Democrats. Liberal Democrats are about as likely as conservative and moderate Democrats to say lawmakers should compromise on the debt ceiling even if it means striking a deal they disagree with.

Attentive Democrats are almost unanimous in their support for compromise to avoid a government default. Fully 90% of Democrats and Democratic-leaning independents who have heard a lot about the possibility of a default if an agreement is not reached say lawmakers should compromise on this issue. By contrast, barely half (54%) of Republicans and Republican leaners who have heard a lot about the debt limit deadline support compromise. Instead, 39% say their leaders should stand by their principles.

Despite the continued deadlock in Washington, attentive Americans are more optimistic that some kind of deal will be reached before Aug. 2. Two-thirds (67%) of people who have heard a lot about the issue say Obama and the Republicans will come to some kind of resolution, compared with 46% of those who have heard little or nothing about it.

Most Say Government Default Will Affect Their Finances 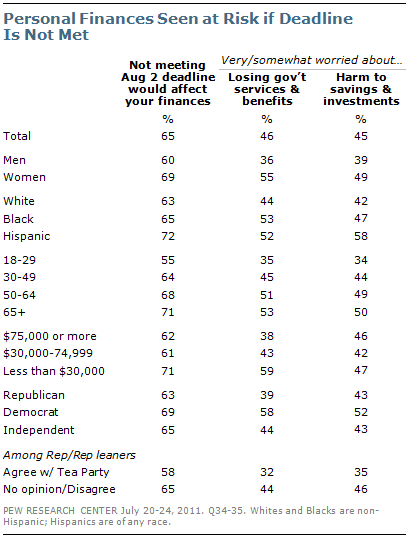 Roughly two-thirds of Americans (65%) believe that their own personal finances would be affected if a deal is not struck by Aug. 2. There is little difference across party lines in this view.

More specifically, 46% of Americans are very or somewhat worried that if the government cannot borrow more money to fund its operations and pay its debts it would lead to the suspension of services and benefits that affect them personally. This concern is higher among women, minorities, low-income Americans, and people over age 50. Most who are worried cite the possible loss of Social Security and Medicare benefits as their greatest fear.

About the same number (45%) are very or somewhat worried that missing the Aug. 2 deadline would harm their investments and retirement savings. 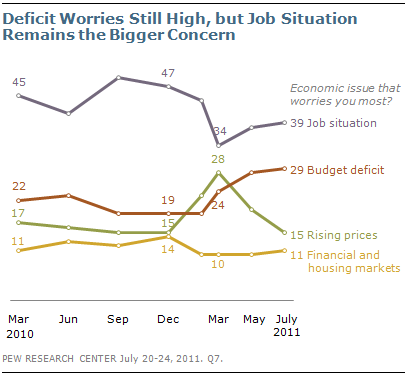 Even as the debt has taken center stage in Washington over the last few weeks, more Americans continue to say the job situation is the national economic issue they are most worried about. About four-in-ten (39%) say the job situation is their top worry, while 29% cite the budget deficit. Just 15% say they are primarily concerned about rising prices and 11% say problems in the housing and financial markets. The relative importance of each of these concerns among the public is little changed since May, when the deficit overtook prices as the second highest-ranked concern. 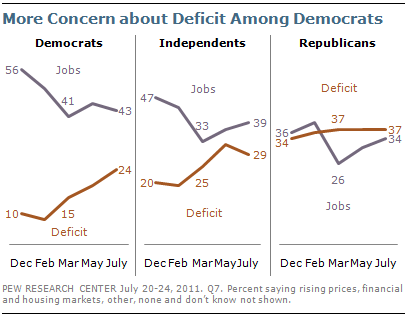 The public remains skeptical that lawmakers will make headway in reducing the budget deficit over the next several years: Just 39% say the country will have made significant progress in reducing the deficit five years from now. At the same time, a majority (60%) say that the best way to reduce the federal budget deficit involves both cutting major programs and increasing taxes. Just 19% say the best approach is to focus mostly on cutting major programs; 8% say the focus mostly should be on increasing taxes. 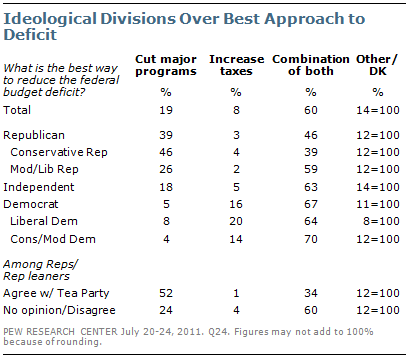 Within the Republican coalition there is a substantial division of opinion. A majority of Republicans and Republican-leaning independents who agree with the Tea Party movement (52%) say deficit reduction should come mostly through major program cuts; just 24% of those who do not agree or have no opinion of the Tea Party say the same.

Will Federal Spending Cuts Help or Hurt the Job Situation? 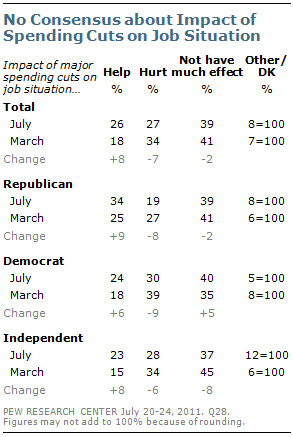 Republicans remain more likely than either Democrats or independents to say cuts would help the job situation (34% say this, compared with 24% of Democrats and 23% of independents). And more Republicans now say this than did so in March (up nine points).