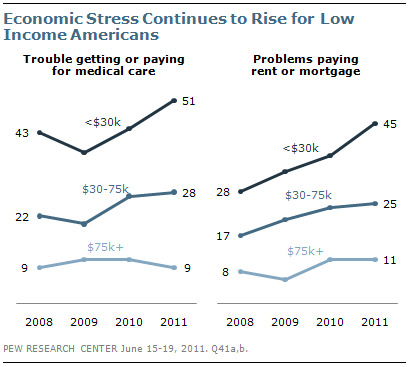 More than a quarter of Americans say that in the past year they have had trouble getting or paying for medical care (29%) or paying their rent or mortgage (26%); another 16% say they have been laid off in the past year. Overall, 44% report experiencing at least one of these three problems, about the same percentage as last year (43%) and seven points higher than in 2009.

Growing numbers of lower income Americans are facing these problems. In 2008, 43% of adults with family incomes below $30,000 said they had experienced trouble getting medical care or paying for it. In the current survey, 51% of low-income 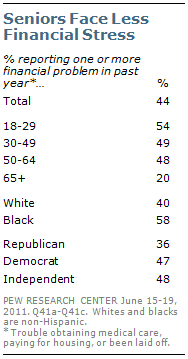 people say they have faced this problem. By contrast, among those with family incomes of $75,000 or higher, the percentage reporting this type of financial trouble was much lower – just 9% – and basically unchanged over the past three years.

Similarly, 28% of lower income respondents in January 2008 said they had experienced trouble paying their rent or mortgage over the past 12 months. In the current survey, 45% reported this financial difficulty. The percentage of more affluent Americans experiencing this problem is much lower (11%) and has remained stable over the past three years.

Apart from the affluent, people age 65 and older are one of the only groups not broadly affected by one of these three types of economic troubles. Just 13% say they have had trouble obtaining or paying for medical care, 10% have had trouble paying the mortgage or rent, and – not surprisingly given their low level of participation in the labor force– just 3% reported being laid off from a job. Overall, 20% of respondents ages 65 and older reported at least one of the troubles. Nearly half or more of all other age groups experienced at least one of these types of difficulties. 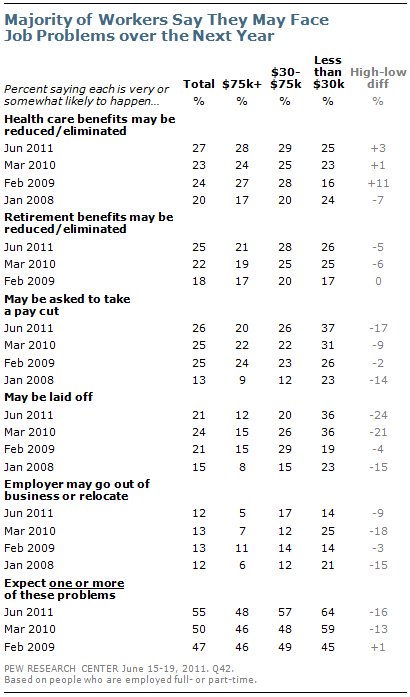 Anxiety about job security, pay and benefits also continues to be widespread. Overall, more than half of those who work full- or part-time (55%) say it is likely they may face pay or benefit cuts, or a possible layoff or job loss over the next 12 months. The percentage reporting one or more of these possible problems is slightly higher than last year (50%) or in 2009 (47%).

Higher-income workers are about as likely as those who are less well off to express concern about a possible cutback or loss of health or retirement benefits. However, far more lower-income workers say they may be laid off or be asked to take a pay cut.

For instance, 36% of workers with family incomes of $30,000 or less say it is very or somewhat likely they may be laid off; that compares with just 12% of those with incomes of $75,000 or more. The proportion of lower incom 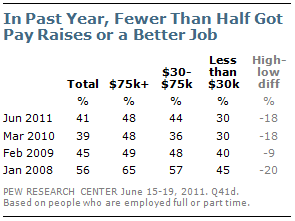 e workers who say they may face a layoff in the next year is unchanged from last year but has nearly doubled (from 19%) in 2009.

Fewer than half (41%) of those who are currently employed say they got a pay raise or found a better job in the past twelve months. That is little changed from last year or 2009. In January 2008, a 56% majority reported having gotten a raise or a new job. 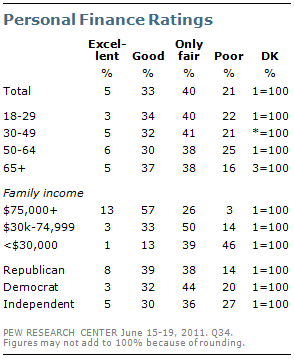 A majority of Americans (61%) say their finances are in only fair (40%) or poor (21%) shape, while 38% rate their finances as either excellent (5%) or good (33%). Personal financial ratings have changed little over the past three years; since December 2008, the percentage rating their finances as excellent or good has consistently been between 35% and 38%. 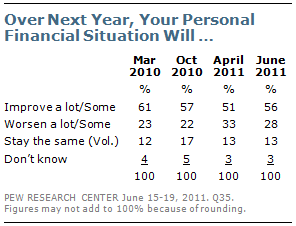 While expectations for the national economy have turned more negative since the spring of 2010, personal financial expectations have been more stable. The percentage expecting their finances to improve over the next year is little changed from October (57%) or March (61%) of last year.

As in the past, age is a major factor when it comes to personal financial expectations. About eight-in-ten (81%) of those younger than 30 say they think their finances will improve in the next year compared with 62% of those 30 to 49, 44% of those 50 to 64 and 33% of those 65 and older. Democrats (64%) are somewhat more optimistic about their finances than are independents (52%) or Republicans (51%). 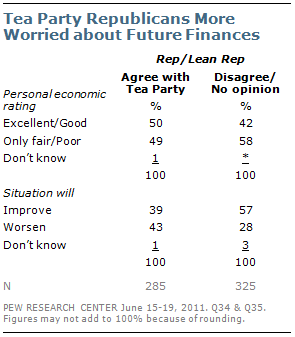 Nonetheless, Republicans who agree with the Tea Party express deep concern about the state of their finances over the course of the next year: about as many expect them to worsen (43%) as improve (39%). Republicans who do not agree with the Tea Party, or have no opinion of the movement, are far more optimistic: 57% expect their personal finances to improve a lot or some over the next year, just 28% think they will worsen.