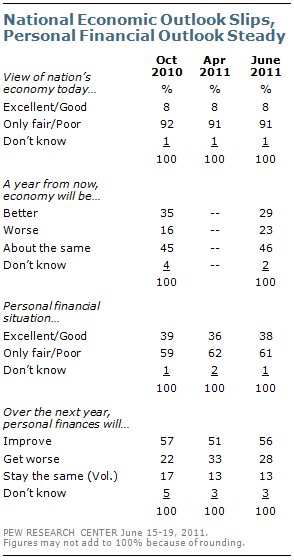 With a growing number of Americans saying they have been hearing “mostly bad” economic news, opinions about the current state of the national economy remain grim. Positive expectations regarding future economic conditions, which remained high even during the depths of the recession, have declined and now stand at their lowest point since mid-2008.

Yet Americans express very different views about their own financial situations. And these impressions, while hardly favorable, have not become more negative over the past several months.

The latest national survey by the Pew Research Center for the People & the Press, conducted June 15-19 among 1,502 adults, finds that 29% expect that economic conditions will be better a year from now while 23% say things will be worse. Last October, more than twice as many said the economy would be better, rather than worse, in a year (35% vs. 16%).

A separate survey, released June 8, found that the percentage saying they are hearing “mostly bad” economic news has nearly doubled since the start of the year, from 24% in January to 46% in June. (For more, see “Number Hearing ‘Mostly Bad’ Economic News Highest Since March 2009.”) 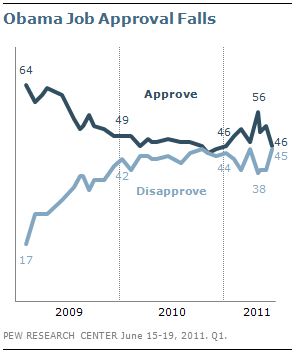 The rise in economic pessimism comes as Barack Obama’s job approval rating has declined. Currently, about as many approve (46%) as disapprove (45%) of Obama’s performance as president. In three previous surveys conducted after the killing of Osama bin Laden, far more had approved than disapproved. (For more on changes in Obama’s job approval, see the detailed tables at the end of this report.)

Satisfaction with national conditions, which rose after bin Laden’s death, also has declined. Just 23% say they are satisfied with the way things are going in the country, down from 30% in early May.

The public’s economic optimism is now at its lowest point since July 2008, shortly before the financial crisis. In the fall of 2008, as perceptions of current national 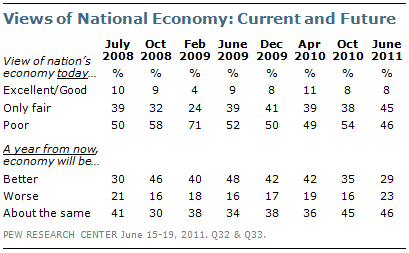 But the percentage saying they expect the economy to be better a year from now has fallen 13 points since April 2010 (from 42% to 29%) and is at the lowest point since Obama took office. 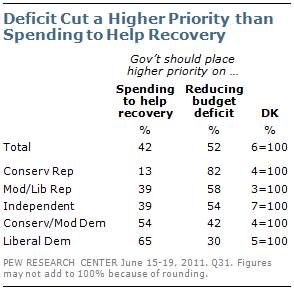 While there are wide ideological and partisan gaps on this issue, independents view deficit reduction as the higher priority. More than half of independents (54%) say this should be a higher priority for the federal government, compared with 39% who prioritize spending to help the economy recover. 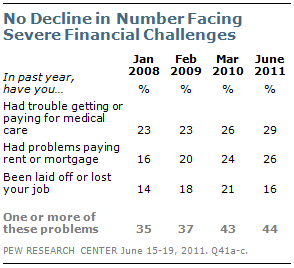 The survey finds that the number of Americans facing severe financial problems has remained steady over the past year, but is higher than in early 2009.

Overall, 44% say they have encountered one or more of these financial problems over the past year, which is unchanged from last year but higher than in February 2009 (37%). These problems are increasingly affecting the poor – fully 70% of those with family incomes of below $30,000 have experienced one or more financial difficulty, up from 59% last year.

Next: Section 1: Views of National Economy
← Prev Page
You are reading page1Page2Page3Page4
Next Page →