Following a series of downbeat reports about housing, jobs and the stock market, the public’s perceptions of economic news have turned much more negative. Fully 46% say they are hearing mostly bad news about the nation’s economy, up nine points since last month and the highest percentage since March 2009.

The latest News Interest Index survey of 1,006 adults, conducted June 2-5, finds that the economy topped the public’s news interest last week. One-in-five (20%) say the followed economic news most closely, compared with 12% who tracked the war in Afghanistan most closely and 11% each who followed the 2012 presidential candidates and the NBA finals most closely.

The economy and the presidential election are the week’s most heavily covered stories, according to a separate analysis by the Project for Excellence in Journalism (PEJ). Reports on the economy accounted for 13% of all news coverage while 12% of coverage was devoted to the campaign. That is the highest percentage of campaign coverage this year, according to PEJ.

Overall, one-in-five Americans (20%) say they followed news about the 2012 presidential candidates very closely, a figure that has changed little over the past few months. However, the proportion following news about the candidates most closely – like the share of news coverage devoted to the campaign – is at its highest point this year, at 11%. 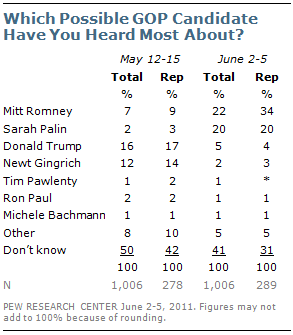 During a week in which Mitt Romney officially launched his presidential campaign and Sarah Palin embarked on a highly publicized bus tour, both Romney and Palin increased their visibility among the public.

Currently, 22% name Mitt Romney as the possible GOP candidate they have been hearing the most about, while 20% name Sarah Palin. Both Romney and Palin were barely on the public’s radar last month. In mid-May (May 12-15), the top two potential GOP candidates in terms of visibility were Donald Trump (16%) and Newt Gingrich (12%). In the new survey, just 5% say they heard the most about Trump and 2% Gingrich.

While Palin matches Romney in visibility among the public, far more Republicans name Romney than Palin as the GOP candidate they are hearing the most about (34% to 20%). No other possible GOP candidate comes close.

The survey finds that as public’s perceptions of economic news have grown more negative, so have views of news about specific economic sectors – notably jobs, real estate and the financial markets. Currently, 58% say they are hearing mostly bad news about the job situation, up seven points since mid-May and 15 points (from 43%) in early April.

In the new survey, 49% of independents say news about the economy is mostly bad, up from just 33% last month. Independents’ views of economic news, which tracked closer to Democrats’ views in May, are now more similar to Republicans’. 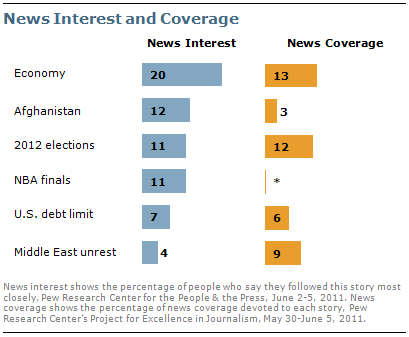 News about the 2012 elections—including Mitt Romney’s announcement that he would seek the Republican nomination—drew 12% of news coverage, about as much as the economy. About one-in-five (21%) followed news about the 2012 candidates very closely, while 11% say they followed it most closely.

Republicans (29%) are more likely than Democrats (20%) or independents (19%) to say they tracked news about the 2012 candidates very closely. 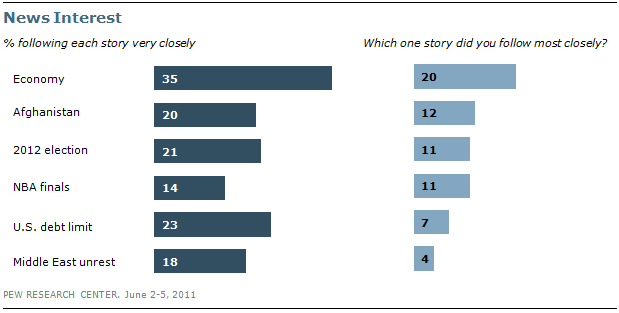 In other political news, the debate in Washington over whether to raise the federal debt limit was the top story for just 7% of Americans; 23% of Americans say they followed news about this topic very closely. Debt limit news accounted for 6% of coverage last week, according to PEJ’s analysis. Republicans were the most interested in this story: 33% say they followed debt limit news very closely, while just 21% of independents and 18% of Democrats say the same. 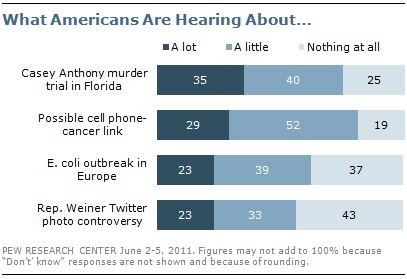 Eight-in-ten Americans say they had heard a lot (29%) or a little (52%) about an international health panel warning of a possible link between cell phone use and brain cancer. As is usually the case with health-related stories, women had heard more about this story than had men (33% heard a lot versus 25%).

Three-quarters of the public say they had heard a lot (35%) or a little (40%) about the Florida trial of Casey Anthony, a mother charged with killing her young daughter. More women than men have heard a lot about this story (40% vs. 30%).

Fewer people had heard about an E. coli outbreak in Europe: 23% say they had heard a lot, 39% a little.

More than half of Americans had heard a lot (23%) or a little (33%) about a controversy involving a sexually suggestive photo of Rep. Anthony Weiner (D-New York) sent out over Twitter. Republicans are more likely to have heard a lot about the Weiner story (33% heard a lot) than either Democrats (20%) or independents (22%). (This poll was conducted before Weiner’s June 6 press conference, in which he admitted to using social media to send inappropriate photos.)

These findings are based on the most recent installment of the weekly News Interest Index, an ongoing project of the Pew Research Center for the People & the Press. The index, building on the Center’s longstanding research into public attentiveness to major news stories, examines news interest as it relates to the news media’s coverage. The weekly survey is conducted in conjunction with The Project for Excellence in Journalism’s News Coverage Index, which monitors the news reported by major newspaper, television, radio and online news outlets on an ongoing basis. In the most recent week, data relating to news coverage were collected May 30-June 5, and survey data measuring public interest in the top news stories of the week were collected June 2-5 from a nationally representative sample of 1,006 adults.