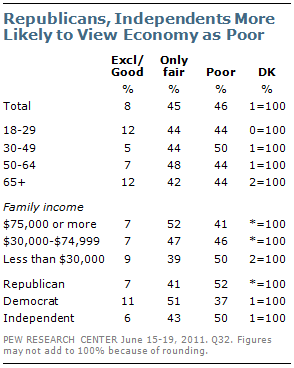 Amid persistent unemployment and slow economic growth, the public continues to take a very negative view of current national economic conditions. Just 8% call economic conditions excellent or good, while an overwhelming majority (91%) says things are either only fair (45%) or poor (46%).

Economic ratings have been consistently downbeat for more than three years – the percentage rating the national economy as excellent or good has not topped 20% since January 2008. The proportion viewing the economy as poor has fluctuated over the past few months. Currently, 46% rate economic conditions as poor, down from 53% in early April, though up slightly from February (42%).

Across all demographic and political groups, no more than about one-in-ten has a positive view of the economy. Half (50%) of people 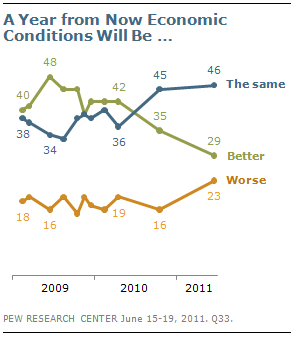 The public’s future outlook for the economy also is gloomy, and more negative than it was last year. Nearly half of Americans (46%) say that a year from now economic conditions in the country will be about the same as today, 29% say things will be better and 23% say things will be worse.

Since April 2010, there has been a broad decline in the percentage saying that the 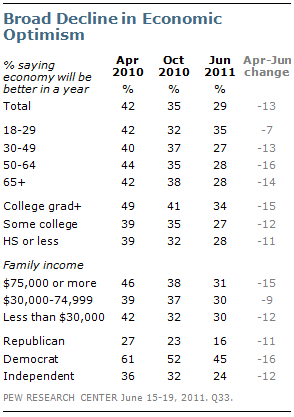 economy will be better a year from now. Only about a third of college graduates (34%) expect the economy to be better a year from now, down from 49% in April 2010. Similar declines have occurred among those with some college experience (12 points) and those with no more than a high school diploma (11 points). Optimism has also fallen among households of all income levels – and affluent homes are no more likely than others to expect conditions to improve over the next year. 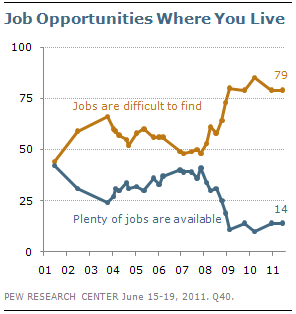 The public continues to take an overwhelmingly negative view of the job situation: 79% say jobs in their area are hard to find compared with just 14% who say plenty of jobs are available. There has been no change since December in views of the job market and the percentage saying jobs are difficult to find has been at or around 80% since February 2009.

The view that jobs are scarce is widely held across demographic groups and there is no difference between partisans. Similar percentages of Republicans (81%), independents (80%), and Democrats (77%) say job opportunities in their area are hard to find.

House Prices Still Seen as Falling, But Hopes for a Rebound

Nearly two-thirds (65%) say that home prices in their area have gone down either a lot (36%) or a little (29%) over the past year. Only 25% say home prices have gone up in that time period. Overall, these assessments are about as negative as they have been over the past several years. 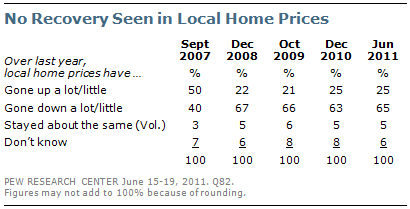 As has been the case since 2007, a majority of Americans (54%) expect that price of homes in their area will go up at least a little over the next few years; 37% say they think home prices will go down a lot or a little. 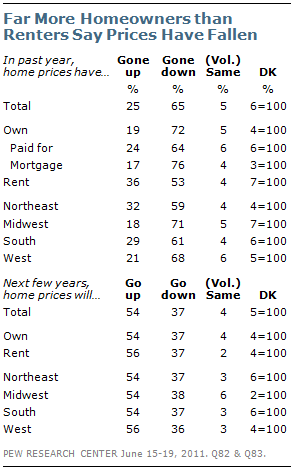 Perceptions of real estate prices over the past year vary by home ownership status. Home owners – especially those who have a mortgage – are more likely than renters to say that prices have gone down in the last year.

About seven-in-ten (72%) homeowners say that home prices in their area have gone down in the past year, including 76% of those who currently pay a mortgage and 64% of those who own their home outright. By contrast, fewer renters (53%) say it is their impression that home prices have fallen in the last 12 months.

In the Midwest (71%) and West (68%) broad majorities say that home prices in their area have fallen over the past year. In the Northeast and South, somewhat smaller majorities say prices have dropped (59% and 61%, respectively).

These differences largely disappear when it comes to expectations for real estate prices over the next few years. Similar majorities of owners (54%) and renters (56%) think prices will go up in coming years. And almost identical percentages of those in the Northeast (54%), Midwest (54%), South (54%), and West (56%) expect home prices in their area to rise over the next few years.

Public’s Views of Nation’s Economy Remain Positive and Deeply Partisan
Views of Job Market Tick Up, No Rise in Economic Optimism
Views of Job Situation Improve Sharply, but Many Still Say They’re Falling Behind Financially
Doubts About Obama’s Economic Policies Rise
Positive Views of Economy Surge, Driven by Major Shifts Among Republicans
Defining generations: Where Millennials end and Generation Z begins
Growing Share of Americans Say They Plan To Get a COVID-19 Vaccine – or Already Have
Quiz: Are you a Core Conservative? A Solid Liberal? Or somewhere in between?
Most Americans Support Tough Stance Toward China on Human Rights, Economic Issues
In their own words: What Americans think about China