The emerging Republican presidential field draws tepid ratings. Just a quarter of voters (25%) have an excellent or good impression of the possible GOP candidates, and a separate survey conducted jointly with The Washington Post finds that negative descriptions of the field far outnumber positive ones. Asked for a single word to describe the GOP field, the top response is “unimpressed.” 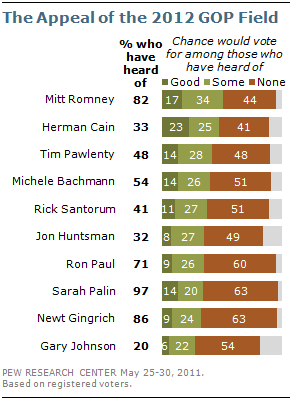 By contrast, far fewer voters (44%) who have heard of Romney have ruled out voting for him, while 51% say there is at least some chance they could support the former Massachusetts governor.

The latest national survey by the Pew Research for the People & the Press, conducted May 25-30 among 1,509 adults (including 1,227 registered voters), finds that Barack Obama continues to hold a sizable lead against a generic Republican opponent in next year’s election. Currently, 48% of registered voters say they would like to see Obama reelected while 37% would prefer to see a Republican elected. This is little changed from March (47% to 37%).

Obama’s job approval rating, which rose after the killing of Osama bin Laden, remains positive. Currently, 52% of the public approves of his job performance while 39% disapprove. Last fall, after his party’s weak showing in the midterm elections, as many disapproved as approved of the way Obama was handling his job as president (44% each).

Obama’s personal image also remains strong. Large percentages continue to view Obama as a good communicator (75%) and warm and friendly (73%), and more see him as a strong leader than did so in January (58% now, 53% then).

The new survey finds that among the Republican candidates, Herman Cain has made a positive impression on the relatively small share of voters – mostly Republicans – who have heard of him. Just 33% of voters have heard of Cain. Among them, 23% say there is a good chance they will vote for the former business executive and another 25% say there is some chance they would vote for him. 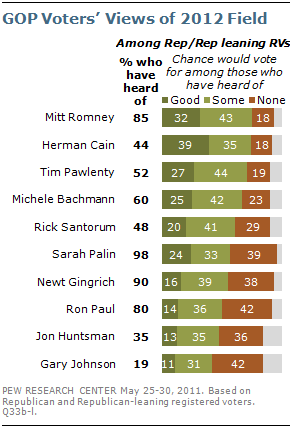 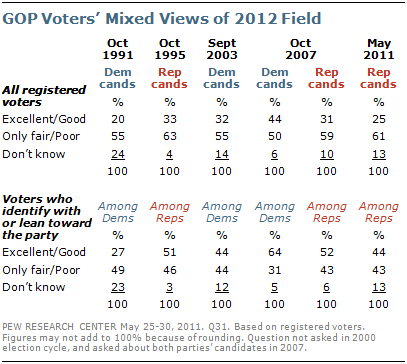 The survey finds that in assessing traits and characteristics of presidential candidates, the public values prior experience as a governor or business executive more than experience as an elected official in Washington. Nearly four-in-ten Americans (37%) say that, in general, they would be more likely to support a candidate who has been a governor, just 5% say they would be less likely to support such a candidate and 55% say it would make no difference. 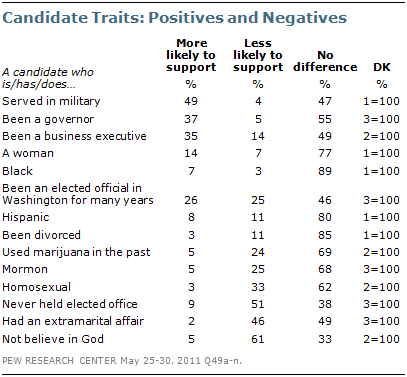 As was the case during the last campaign, prior service in the military is viewed very positively. Nearly half (49%) say they would be more likely to support a candidate who has served in the military, the highest percentage for the 14 traits and characteristics listed.

A third of Americans (33%) say they would be less likely to support a presidential candidate who is homosexual, which is sizable decline from 2007 (46%). In the new survey, 62% say it would not matter if a candidate is homosexual, up from 51% four years ago.

Next: Section 1: The 2012 Election
← Prev Page
You are reading page1Page2Page3Page4Page5
Next Page →