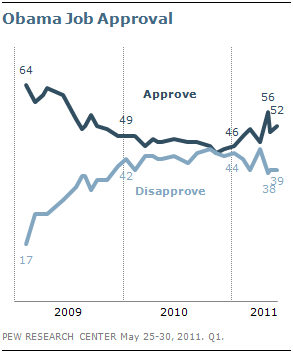 Obama’s job approval ratings are relatively unchanged since early May. Currently, 52% approve of the way Obama is handling his job as president while 39% disapprove. As recently as early April, the public was divided (47% approved, 45% disapproved).

Following a significant bump to 56% in the immediate wake of Osama bin Laden’s death, Obama’s approval ratings have subsided somewhat but remain far more positive than they have been for much of the last year.

Independents’ assessments of Obama’s performance spiked from 42% to 52% approval on news of Osama’s death, and remain at 49% in the current survey. The current survey also finds that just 37% of independents disapprove of Obama’s job performance, the lowest since the fall of 2009. By comparison, approval ratings among Democrats and Republicans have been more stable. 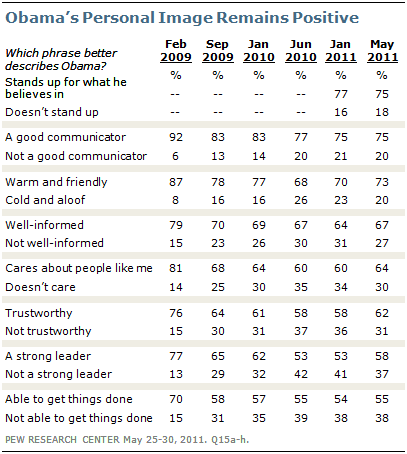 Obama continues to earn positive personal assessments from the public. Three-quarters say Obama is a good communicator (75%), stands up for what he believes in (75%) and nearly as many view him as warm and friendly (73%). Many also consider Obama to be well-informed (67%), trustworthy (62%) and able to get things done (55%). And 64% say he is concerned about people like them.

For the most part, public views of Obama’s personal qualities have been relatively stable over the last year. The public’s opinions about Obama’s personal traits and characteristics are substantially less positive than they were in February 2009, shortly after he took office.

Republicans Positive about Some Obama Traits

Democratic impressions of the president are overwhelmingly positive. Nearly all Democrats say Obama is a good communicator (95%) and that he cares about people like them (91%); three-quarters or more rate him positively on all of the other characteristics. 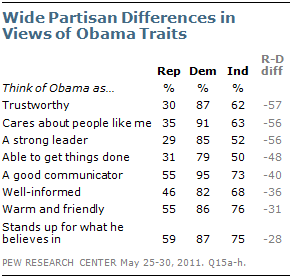 Republican assessments are more critical, but more than half of Republicans say that Obama stands up for what he believes in (59%), is warm and friendly (55%) and is a good communicator (55%). GOP opinions about other traits are more negative. Just 29% say Obama is a strong leader, only 30% say Obama is trustworthy, and 31% say he is able to get things done. Independent opinions largely mirror those of the general public.

Democrats are nearly three times as likely as Republicans to view Obama as trustworthy (87% vs. 30%) or as a strong leader (85% vs. 29%). By contrast, there is more agreement about whether he is well-informed (82% of Democrats, 46% of Republicans), warm and friendly (86% to 55%), and stands up for his beliefs (87% vs. 59%). These partisan differences in evaluations of Obama are largely unchanged over the past year. 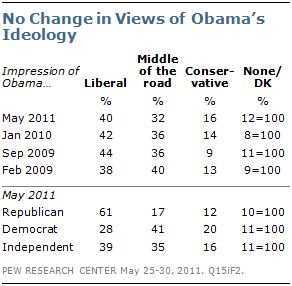 Impressions of Obama’s ideological stance remain mixed. A plurality (40%) says he is liberal, 32% say he is middle-of-the-road, and 16% say he is conservative.