Barack Obama continues to fare well against a generic Republican opponent in the 2012 general election. Nearly half (48%) of registered voters say they would like to see Barack Obama reelected, while 37% say they would prefer to see a Republican candidate win in 2012. This is virtually unchanged from March.

This 11-point edge is comparable to the 14-point advantage George W. Bush held in April 2003, when 48% said they would like to see him reelected and 34% said they would prefer to see a Democrat win. At that time, the Iraq war was viewed very favorably, and Bush’s overall job approval rating among the public stood at 72%. By comparison, Obama’s enjoys a much more modest 52% approval rating in the current survey.

Voter preferences continue to follow the same patterns seen in the 2008 election outcome – Obama holds commanding leads among minorities, young people, and low income Americans, but trails by substantial margins among whites – particularly white men and working-class whites. But critically, Obama holds a slim 42% to 35% edge against an unnamed Republican challenger among independents. This, too, is virtually unchanged from March (40%-34%), and mirrors the margin by which he won independents according to the 2008 exit polls (52% vs. 44% for McCain). 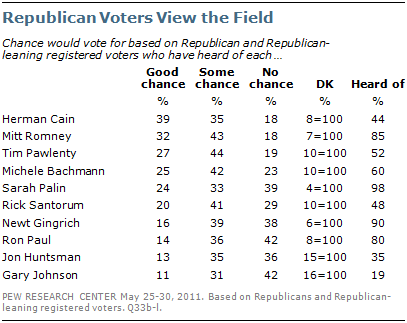 At this early stage of the 2012 presidential election Sarah Palin, Newt Gingrich and Mitt Romney stand-out as the most widely recognized candidates by Republican and Republican-leaning independent voters. But while highly visible, many say there is “no chance” they will vote for Palin or Gingrich; somewhat fewer have ruled out voting for Mitt Romney.

Newt Gingrich is also widely recognized – 90% have heard of him – but just 16% say there is a good chance they will vote for him if he is a candidate for president; 39% say there is some chance, 38% no chance.

While not widely known, Herman Cain enjoys broad support among the 44% of Republican and Republican-leaning independents who have heard of him: 74% say there is either a good chance (39%) or some chance (35%) they would vote for him; 18% say there is no chance.

Overall, six-in-ten voters (60%) say they are paying a lot (27%) or some (33%) attention to the candidates who may be running for president in 2012. Compared to roughly the same time period in the 2008 election cycle – a contest where both parties had primary elections – interest is somewhat lower: in June of 2007, 68% were paying at least some attention to potential candidates in the 2008 election. 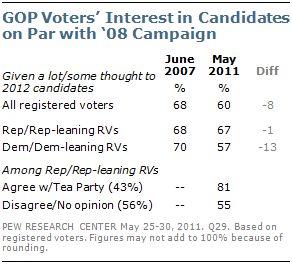 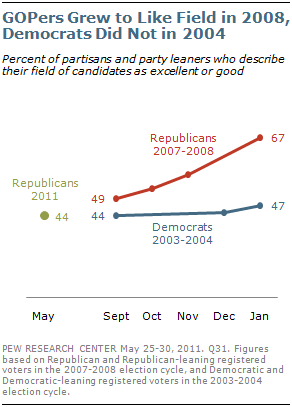 Republican and Republican-leaning voters do not have a very positive view of their party’s presidential candidates: 44% say as a group, the candidates running for the Republican nomination are excellent or good, while 43% say they are only fair or poor.

But these ratings are only slightly more negative than GOP voters’ views of the party’s presidential field in September 2007. At that time, 49% of Republican and Republican-leaning voters said the GOP candidates were excellent or good while 44% said they were only fair or poor.

And as the 2008 campaign progressed, Republican voters subsequently came to view their party’s candidates more favorably. By January 2008, 67% said the GOP candidates were excellent or good compared with 31% who said they were only fair or poor.

Democratic voters had much more positive views of their party’s candidates throughout the 2008 campaign. In September 2007, 64% of Democratic and Democratic-leaning voters rated the Democratic field as excellent or good and by January 2008, 78% expressed a positive opinion of the candidates.