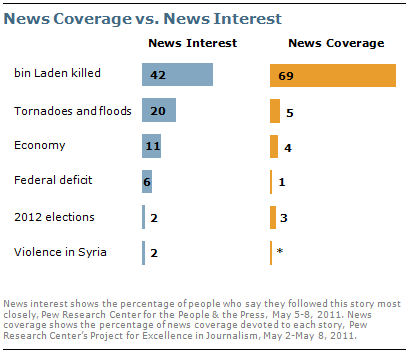 While the killing of Osama bin Laden in Pakistan by U.S. military forces attracted a near-record amount of news coverage, public interest in the story has been comparatively modest.

Just more than four-in-ten (42%) say they followed news about the Al Qaeda leader’s killing more closely than any other news last week. One-in-five (20%) followed news about severe weather and flooding in the South and Midwest most closely. Bin Laden’s death is clearly the week’s top story, but it is not the top story for 2011. In mid-March, far more (57%) said they followed the Japan earthquake and nuclear disaster most closely.

Fully 69% of news coverage for the week was devoted to bin Laden’s killing, according to a separate analysis by Pew Research’s Project for Excellence in Journalism. Since PEJ began tracking news coverage in early 2007, only one story has approached the level of coverage bin Laden’s death received: In late August 2008, the media devoted just less than 69% to the presidential campaign during the week in which Democrats nominated Barack Obama and John McCain introduced Sarah Palin as his vice presidential running mate.

The latest weekly News Interest Index survey, conducted May 5-8 among 1,003 adults, also finds that substantially more think that the killing of bin Laden received too much rather than too little news coverage (43% vs. 9%). About four-in-ten (42%) say the amount of coverage has been about right. 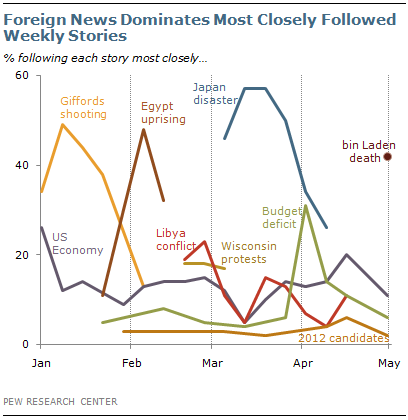 Looking at the public’s top stories for 2011, other dramatic events have attracted as much or more interest. For several weeks after the Japan earthquake in March, majorities cited the disaster as their most closely followed story.

In mid-January 49% said that their top story was news about the shooting rampage in Tucson, Ariz., that left six dead and Rep. Gabrielle Giffords fighting for her life. One month later, 48% said they were most closely following news about the dramatic uprising in Egypt and the resignation of President Hosni Mubarak. 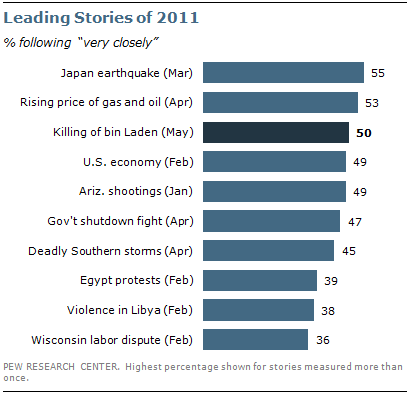 While 42% cite bin Laden’s killing as their top story of the week, half of the public (50%) says they followed this news very closely. That ranks this news among the top stories of 2011 so far by this metric. It also is greater than the 44% that said they followed news about the capture of Saddam Hussein in Iraq very closely in December 2003.

This measure is different from the most closely followed story each week. It tracks interest in each story individually.

By this measure, the Japan disaster and the rising price of gas and oil attracted the highest interest (55% very closely in mid-March for Japan, 53% for rising prices in April). Other top stories have been the Arizona shootings in January (49%) and the nation’s economy (49% in February). 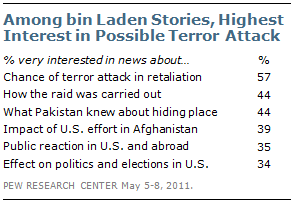 When asked which aspects of the news about Osama bin Laden they have found interesting, 57% say they have been very interested in news about the chance of a terrorist attack on the U.S. in retaliation for the killing of the al Qaeda leader.

About four-in-ten say they have been very interested in how the military raid was carried out (44%), whether Pakistan knew or should have known where bin Laden was hiding (44%) and the impact of the killing on U.S. involvement in Afghanistan (39%). About one-in-three Americans say they are very interested in the public reaction to bin Laden’s killing here and around the world (35%) or what effect bin Laden’s killing may have on American politics and elections (34%).

In an analysis of the first three days of coverage last week, PEJ found that the news media had devoted a quarter of coverage (25%) to recounting details of the dangerous raid and 24% to reaction in the U.S. and around the world. Another 11% dealt with the domestic political fallout, 10% dealt with the prospects for new terror attacks, 9% with the role played by Pakistan and 7% with the impact on U.S. policy.

Independents are generally less interested in the bin Laden sub-stories than are Democrats or Republicans. When it comes to the impact of bin Laden’s killing on American politics and elections, Democrats express greater interest (45% very interested) than Republicans (33%) or independents (28%). 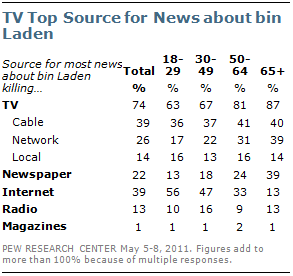 Television was the main source for news about bin Laden’s death for about three-quarters of the public (74%), followed by the internet, newspapers and radio.

Television is the most widely cited news source, regardless of gender, education, party identification or age. Those 65 and older, though, are much more likely to have gotten most of their bin Laden news from television than are those younger than 30 (87% versus 63%).

Almost four-in-ten Americans (39%) say they got most of their news about this story from the internet. More than half of those younger than 30 (56%) cite the internet as their top news source. Conversely, just 13% of those 65 and older say the internet was where they got most bin Laden news.

Older Americans are more likely to have relied on network news outlets or on Fox News than are younger Americans. There is no age difference when it comes to CNN or MSNBC.

Partisan differences, however, are large. Democrats (28%) and independents (21%) are more likely than Republicans (13%) to have cited CNN as their top bin Laden news source. Three-in-ten Republicans (30%) cite the Fox News Channel, compared with 6% of Democrats and 16% of independents. Partisans are about equally likely to have turned to the internet, newspapers and other sources for news about the bin Laden killing.

Just 20% of Americans say they got a lot (7%) or a little (13%) news about the bin Laden story through social networking sites, such as Facebook or Twitter. However, social networks 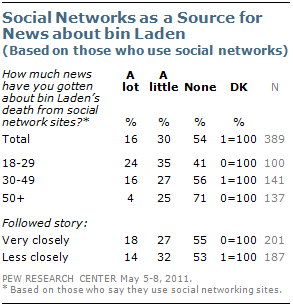 were an important source of information for the 44% of the public that uses Facebook, Twitter or other social networks.

Among social network users, 46% say they got a lot (16%) or a little (30%) information about the killing of bin Laden through social networking.

Though most coverage last week focused on the bin Laden killing and its implications, the public kept a watch on several other stories as well. For example, 41% say they very closely followed news about deadly tornadoes and floods that hit the South and Midwest. Two-in-ten (20%) say this was the news they followed most closely. The extreme weather conditions accounted for 5% of coverage, according to PEJ.

Four-in-ten (40%) say they tracked news about the U.S. economy very closely, while 11% say this was the news they followed most closely. News about the economy made up 4% of coverage.

About three-in-ten (29%) say they very closely followed the ongoing debate over the federal budget and how to reduce the nation’s deficit; 6% say this was their top story. News about the deliberations in Washington accounted for just 1% of coverage.

About one-in-six (16%) say they very closely followed news about these early stages in the 2012 presidential election; 2% say this was the news they followed most closely. In a week that included the first debate among potential Republican candidates, news about the election made up 3% of coverage.

Another 14% say they very closely followed news about ongoing violence in Syria; 2% say this was their top story of the week. News about developments in Syria accounted for less than 1% of coverage.

These findings are based on the most recent installment of the weekly News Interest Index, an ongoing project of the Pew Research Center for the People & the Press. The index, building on the Center’s longstanding research into public attentiveness to major news stories, examines news interest as it relates to the news media’s coverage. The weekly survey is conducted in conjunction with The Project for Excellence in Journalism’s News Coverage Index, which monitors the news reported by major newspaper, television, radio and online news outlets on an ongoing basis. In the most recent week, data relating to news coverage were collected May 2-8, and survey data measuring public interest in the top news stories of the week were collected May 5-8, from a nationally representative sample of 1,003 adults.