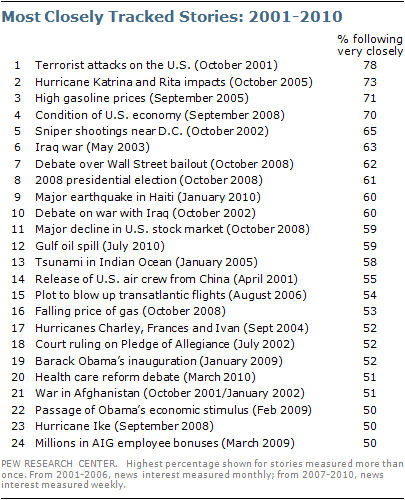 The 9/11 terrorist attacks drew more public interest than any other story in the past decade. In October 2001, a month after the attacks, 78% said they were following news about the story very closely, up slightly from the week after the attacks (74%).

The 2005 hurricanes sent the price of gas soaring, a development that also drew broad public attention. In September 2005, 70% said they were following news about high gas prices very closely. In general, the public is highly attentive to fluctuations in gas prices. Nearly as many said they were closely following rising gas prices in May 2006 (69%) and June 2008 (66%), and when prices fell in October 2008, 53% followed very closely.

Aside from Hurricane Katrina, several other natural disasters over the past ten years riveted the American public’s attention. In particular, roughly six-in-ten very closely followed both the 2010 earthquake in Haiti and the 2004 tsunami that struck coastal areas surrounding the Indian Ocean.

During this decade there were several mass shootings, but the ongoing shooting spree that for weeks terrorized the Washington, D.C.-area attracted the most public interest. In October 2002, 65% said they were following news about the sniper attacks very closely. The sniper shootings were the public’s top story in 2002. 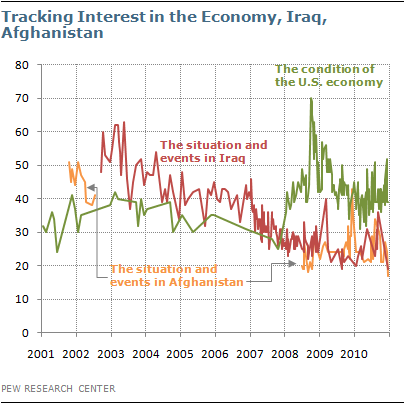 A number of the decade’s top stories occurred during a tumultuous two-month period in the fall of 2008. As the mortgage and financial crisis grew, 70% of Americans said they were following economic conditions very closely in September of 2008, and in October 59% reported very close attention to the stock market declines specifically. Around the same time, 62% said they were following the debate in Washington over plans to use government funds to stabilize the markets very closely. By this measure, public interest in the bank bailout debate was far more intense than the highest levels of interest in the 2009-2010 health care debate (51% followed very closely in the final week before passage) or the 2009 stimulus debate (50% very closely). And to top off a month packed with economic news, 61% of Americans were following the 2008 election very closely at the same time.